VT Halter Marine Inc., part of ST Engineering North America, received top honors during the International WorkBoat Show when the Taino and El Coqui were named the 2019 Boat of the Year by WorkBoat magazine. The ships, built for Crowley Maritime Corp, were selected based on criteria set by WorkBoat and by popular vote.

The Taino and El Coquí are the first Commitment-class, liquefied natural gas-powered ConRo ships built for Crowley’s shipping and logistics services between Jacksonville, Fla., and San Juan, Puerto Rico. Built specifically for the Puerto Rico trade, the ships are 720', with 26,500 deadweight tons, and are able to transport up to 2,400 20-equivalent units (TEUs) at a cruising speed of 22 knots.

Each vessel accommodates a wide range of container sizes and types including 53'x8'6", high-capacity containers, up to 300 refrigerated containers and a mix of about 400 cars and larger vehicles in the enclosed, ventilated and weather-tight Ro/Ro decks. 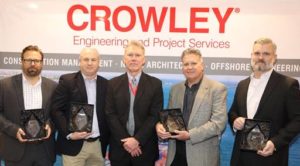 “VT Halter Marine is proud to be part of the team on these first of class vessels for Crowley,” said Ron Baczkowski, president and CEO of VT Halter Marine. “We are especially proud that the ConRos are supporting the economy and U.S. citizens of Puerto Rico. This award is a strong testament that the dedicated craftsmen and women at VT Halter Marine can build and deliver technically complex and innovatively designed vessels.”

Fueling the ships with LNG reduces emissions significantly, including a 100% reduction in sulphur oxide and particulate matter; a 92% cut in nitrogen oxide and carbon dioxide emissions will be cut by more than 35% per container, compared with current fossil fuels.

“Building these dual-fueled vessels gave us the opportunity to learn how to work with LNG and really understand the special equipment and materials in the LNG supply chain,” Baczkowski said. “VT Halter Marine is in a much better position to support the marine industry as it moves to greener propulsion system alternatives.”

Only boats that appeared in WorkBoat magazine from December 2018 to November 2019 were considered for the Significant Boat listing. In addition, the boat has to appear as a full item in the magazine’s boatbuilding section (On the Ways) or be the focus of one of a feature article, which means the story must have a list of specifications, including owner, builder and designer, at least one photo of the boat and an interview with at least one of the major participants in the project. Furthermore, while design is the most important ingredient in the Significant Boat consideration, it is not the only one. Consideration is not based on naval architecture and marine engineering only. Other factors include the vessel’s first-of-its-kind status, if it is a successful series build, where it operates, whom it serves and how it helps advance new workboat frontiers such as wind energy.

VT Halter Marine vessels have been included in the Significant Boat listings in the following years:

WorkBoat names its 10 Significant Boats of 2019