Transporting vessels around shipyards and in and out of water

The launching and hauling of vessels has mostly been done on a set of greased ways with the boat sliding into the sea in a cradle. It isn’t foolproof, especially when the cradle breaks, sending the vessel off the ways and onto its side, its guests tossed into the scuppers and maybe over the side.

Cranes have been used to launch vessels but they too have had their problems, primarily when the crane’s boom snapped while the boat was hoisted out over the water.

The reverse of that, hauling a vessel from the water has always been a labor intensive, arduous task, even after engines replaced the men and horses used to turn the early hauling windless. Once a boat was ashore things weren’t necessarily much easier. Moving even a midsized boat around a boatyard is not an easy project.

One of the starting points out of those earlier labor intensive, potentially costly endeavors took place in the 1940s at a yacht club in Sturgeon Bay, Wis. That’s when a man named Baudouin came up with the idea of using two piers with a steel frame on four truck wheels with chain blocks and straps to pull a boat weighing a few tons from the water and placing in on the ground. 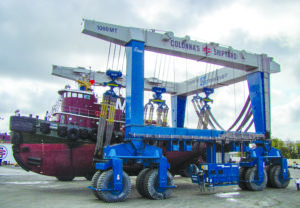 It appears that the founders of Marine Travelift in Sturgeon Bay took that idea and ran with it, introducing the first self-propelled straddle-type mobile boat hoist three years after the company was established in 1954. It had a capacity of seven tons. It was soon followed with an open-end style boat hoist.

Just in terms of lifting capacity, Marine Travelift has come a long way. In 1987 the company built the 500 BFM (beam forward machine) for Abu Dhabi Shipbuilding. With a 500-ton capacity, the 500 BFM was the world’s most powerful boat hoist at the time. Then, in 2010, the 1000C Marine Travelift built for Colonna’s Shipyard, Norfolk, Va., became the world’s most powerful boat hoist. At 1,100 tons it’s Marine Travelift’s largest hoist in operation. However, they have a design for a 1,600-ton (3.52 million lbs.) lift that hasn’t been sold yet. That’s an improved lifting capacity of 1,957 tons in 62 years???.

Marine Travelift isn’t focused only on lifting large, heavy boats. In 2018 they introduced the 400 TG (400 tons or 880,000 lbs.), which was specifically designed for tugs and other workboat applications. The 400 TG features two sets of slings instead of four. “The slings can be tighter and closer together to better lift short, heavy vessels,” said Erich Pfeifer, president of Marine Travelift

The ability to pick up heavy loads is only one reason for a boatyard to have a Marine Travelift boat hoist. “Drydocks take up to a day to perform a lift,” said Pfeifer. “Marine Travelift regular picks take less than a few hours.”

That means that a lot less labor and time is involved. Thus, more boats can be handled in a day, “which maximizes work time and efficiency,” Pfeifer said. In addition, a Marine Travelift boat hoist allows a boatyard to work on a boat on land as opposed to a drydock or ways which might present environmental issues.

This doesn’t mean that a boat hoist is the only way to efficiently and economically move vessels in and out of the water and around a shipyard. 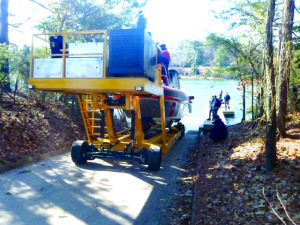 The boat built in 2017 came with a feature that was added to the earlier model after it was discovered that in an unloaded condition, the rear wheels lacked traction in the mud and slime at the bottom of a boat ramp. The solution was a proprietary traction control system that allows the operator “to reduce the drive torque to any of the four drive motors,” said Dwight Stimson, president of Hostar Marine.

The boats built for the Coast Guard are similar to Hostar’s Yard Star Series of self-propelled boats with some differences. “The Coast Guard required removable roller assembles on the keel support and cross beams,” said Stimson. The Coast Guard also wanted a heavy winch to pull boats that might be dead in the water, and they requested all stainless steel hardware and hydraulic fittings.

The submersible self-propelled boats are controlled from an elevated platform on the forward end that provides better visibility than if the operator was on the ground, whether while launching, pulling a boat out of the water, or blocking boats on land. When blocking boats, the trailer on the self-propelled boat allows “blocking boats gunnel to gunnel with as little as one inch between gunnels,” said Stimson. That allows an increase in yard storage space by 50% to 75% over using a hoist.

A larger version of the Coast Guard’s self-propelled boat was delivered to Island Venture, a boatyard in Petersburg, Alaska, in 2013. That one measures 50’x10’6” and has six hydraulic stabilizing arms, instead of the four on the 40 footer. It also has a six-wheel drive unit, as opposed to the Coast Guard’s four-wheel drive.

The Coast Guard’s self-propelled boat mover can handle a load of 25 tons. Island Venture’s boat in Petersburg is capable of moving 45 tons, and “she has hauled a 60’ or possibly 70’ boat,” said Stimson.

The Hostar self-propelled boat has a feature that makes it different from others, said Stimson. That’s “hydraulic drive motors at the front and the rear, as opposed to using a conventional steering axle from a tractor trailer and having just drive motors at the rear.” The bearings and seals are completely enclosed within the drive motor making them more saltwater resistant, Stimson said.

Hostar delivered a 60-ton non-submersible boat mover to a Connecticut boatyard in February and is working with a boat manufacturer to build two 45-ton self-propelled platforms to move boat molds. 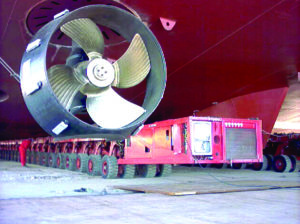 Moving this vessel required multiple SPMT units on both sides of the keel. Transport Systems and Products Inc. photo

Another company with equipment designed to move workboats about a boatyard is Transport Systems and Products Inc., Stamford, Conn. That’s the shipyard transporter and the self-propelled modular transporter (SPMT). It’s a multiwheeled platform — two-, three-, four- or six-axle modular units — that can handle up to 86 tons. Platforms may be mechanically connected to one another or several platforms can be held in place not with a physical connection but by the weight of the load the SPMT units are transporting. They would be programmed so a single steering unit controls all platforms.

“With the SMPT Light you can go after smaller boats,” said Michael La Scala, Transport Systems vice president of sales. “The 65’ workboat can be moved around with ease — both components and the whole boat.” At the end of September, two SPMT Light units were in stock and ready to be shipped

What La Scala calls an overgrown SPMT on steroids is the shipyard transporter. It can be coupled end-to-end like the SPMT or in the case of hauling a large hull section, coupled side-to-side.

When going over uneven ground or up a grade the axles of the shipyard transporter, like the SMPT, compensate for the unevenness. The front axles lower and the rear axles rise to keep the load level. It can handle an 11% grade,

The control position of choice for the shipyard transporter is a cabin underneath the platform and between the wheels. Usually there’s a control cabin at each end.

These are diesel powered but an electronic version will be introduced at the WorkBoat Show. The electronic shipyard transporter will be particularly handy when moving objects inside buildings where diesels shouldn’t be operating.

The SMPTs were introduced in the early 1980s and the transporters in the mid-1970s. Over the years, two features have been introduced to make both units much more effective. First is the precise steering capability. It’s “single millimeters of accuracy,” said La Scala. “If you have to put two pieces of hull together, you have to be pretty precise.”

The second feature is the pendulum axles, whose importance La Scala describes “as enormous.” That’s the ability of the axle to raise, lower and turn 165º in either direction. He describes the axles as “all individual but they work together.”

Whereas some large shipyards have used railed transports to move large parts of a boat, with the SMPT’s latest features, “you can use the SMPT instead of rails, which gives the ability to go anywhere in the yard.”