Donjon Marine Company is a provider of multifaceted marine services. The company’s fleet is made up of some 62 vessels. It also operates as a shipyard, located in Erie, Pennsylvania providing both new construction and repair services for their own vessels and others along the Eastern Seaboard.

In 2018 Donjon was on a mission to located new engines for the new retractable pilot house pusher type tug as part as their expansion plans. The vessel would be used to support Donjon’s New York and New Jersey business and to transit the Erie/New York State Barge Canal System.  The initial specification called for a twin screw 2,400 hp vessel. 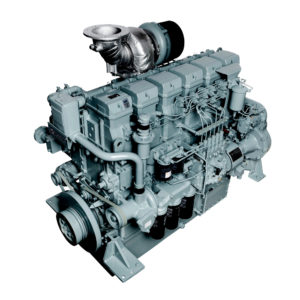 The new Tier 4 EPA emissions requirements that were going into effect was making finding the right engine for the application a challenge. Donjon needed EPA emission compliant, fuel efficient, simple engines without complex electronics and an after-treatment.

After visiting Mitsubishi during the Work boat Show and exploring the Tier 3 EPA certified, no after-treatment solutions. The final selection for this pusher tug was a Mitsubishi S6R2-Y3MPTA-2, rated at 803 hp @ 1400rpm.  Instead of going with the original plan of building twin screw 2400 with two Tier 4 engines with complex electronics and a SCR after-treatment.  Donjon designed a triple screw, 3 x 804hp Mitsubishi engine running a 2400 hp vessel.

This triple screw design gave them the 2400 hp capability they wanted and the ability to operate on only two engines during reduced power operations, providing them with both flexibility and economy. The 804 hp engines are only required to meet EPA Tier 3 and Mitsubishi is able to provide these engines with simple mechanical controls and no after-treatment.  This solution without the after-treatment provides a simple operation, more space in the engine room and the reliable Mitsubishi quality.

Laborde Products adds Matte and Lapeyrouse to its sales team