Lax oversight by the owner, no roving watch, insufficient smoke detectors and poor escape routes contributed to the fire that killed 33 passengers and one crew on a California dive boat last year, the National Transportation Safety Board (NTSB) ruled Tuesday. 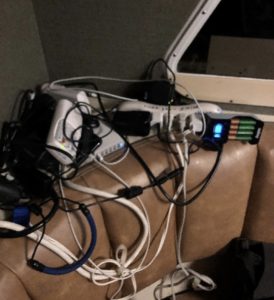 Divers’ electronic devices such as cell phones, underwater flashlights and tablets were being charged overnight. National Transportation Safety Board photo

The NTSB also faulted the Coast Guard for not following an earlier suggestion to require safety management systems on all U.S.-flag passenger vessels and suggested they do it now. The agency’s new recommendations include interconnected smoke detectors on overnight vessels, escape paths that lead to different spaces and a Coast Guard procedure to verify that roving patrols are enforced.

“Had a crewmember been awake, it is likely he or she could have discovered the fire at an early stage” and let people survive, said Andrew Ehlers, the NTSB’s marine accident investigator. The lack of a roving watch “directly led to the high number of fatalities in the accident.”

All six crewmembers were asleep when the fire started on the 75’x25′ wooden hulled Conception off Santa Cruz Island, Calif., Sept. 2, 2019, the NTSB has said. The Certificate of Inspection (COI) for the vessel built in 1981 requires a roving patrol. Most victims were awake as the fire progressed but couldn’t escape and probably died of smoke inhalation, officials said.

The fire, which likely began in the aft portion of the salon, was “probably the greatest loss of life in the U.S. merchant marine for many decades,” said Morgan Turrell, deputy director of NTSB’s office of marine safety. (The 790' containership El Faro sank in Hurricane Joaquin in 2015 with all 33 on board.)

The NTSB said it found several unsafe practices on vessels operated by Truth Aquatics Inc., including lack of crew training and emergency drills. The company “had been deviating from required safe practices for some time,” a synopsis of the findings notes. A safety management system likely would have corrected any lapses in operations.

The company has not responded to an email request for comment. 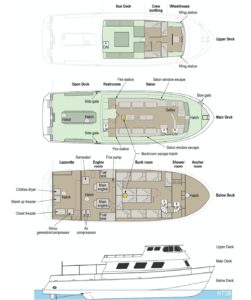 The NTSB could not interview the captain or the first galley hand because of a pending federal criminal investigation, which also included seizure of company documents and records.

While the NTSB didn’t positively identify an ignition source, it said possible flashpoints included the vessel’s electrical distribution system and unattended batteries being charged. Divers’ electronic devices such as cell phones, underwater flashlights and tablets were being charged overnight. A Coast Guard safety bulletin issued right after the fire urged operators to limit the unsupervised charging of lithium-ion batteries and extensive use of power strips and extension cords.

Smoke detectors met regulatory requirements, but interconnected ones that sound in unison in all accommodation spaces on Subchapter T and Subchapter K vessels would increase the chances of saving lives, NTSB said.

The agency has no enforcement power, though it does have the power of persuasion.