Coast Guard should be more aggressive in using unmanned systems

As unmanned systems (UxS) continue to develop and be used by other military services and federal agencies, the Coast Guard should proceed more aggressively and deliberately in taking advantage of UxS advancements, according to a new congressionally mandated report from the National Academies of Sciences, Engineering, and Medicine. 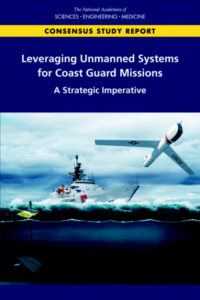 UxS technologies include aerial, surface, and underwater vehicles with no human occupants; ehicles that may have a crew but with some level of remote control; and systems that are not vehicles.

As one of the country’s six military services, the Coast Guard also serves as a first responder, law enforcement agency, maritime regulator, and member of the intelligence community. Despite multiple initiatives to explore and assess the applicability of UxS to these areas, the Coast Guard lacks a formal means for identifying, investigating, and integrating systems, the report said. Meanwhile, UxS technological advancements continue to accelerate, driven by both commercial and military demands.

In comparison to other military services, and even some civilian agencies and private industries, the Coast Guard's adoption of UxSes has been slow and ad hoc, but the opportunity remains to deploy them in a more concerted and strategic manner to add new capabilities and strengthen existing ones with less risk to personnel and traditional assets, the NAS report said.