Last month, Fincantieri Bay Shipbuilding and Polaris New Energy held a keel laying to mark the start of construction of an LNG (liquefied natural gas) bunker barge. The barge Clean Canaveral will be part of an articulated tug-barge unit that will initially operate along the U.S. East Coast, providing LNG bunkering solutions to NorthStar Midstream’s customers.

The 340'x66'x32'10" barge is being built in a series of prefabricated, complete hull sections. After several months of pre-fabrication work of its modular sections by Fincantieri Bay Shipbuilding’s team, the 55-ton modules were set into place at Bay Ship in Sturgeon Bay, Wis. 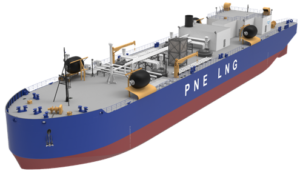 The 5,400-cubic-meter barge will be fitted with four 1,350 cubic meter IMO Type C tanks. It will utilize a cargo handling system designed and developed by Wärtsilä Gas Solutions. The barge will be ABS classed. The vessel is slated for completion in late 2021.

“We are pleased to see the completion of this significant construction milestone,” said Polaris New Energy’s Senior Vice President of Operations Thomas Sullivan. “We are proud of our productive working relationship with Fincantieri Bay Shipbuilding, the U.S. Coast Guard, and ABS and look forward to the safe and efficient delivery of clean LNG fuel by this state-of-the-art bunker vessel.