At an average pay around $70,000 “marine jobs are just the kind of jobs that government policy should be promoting, said Aaron Smith, president of the Offshore Marine Service Association told members of the House Subcommittee on Energy and Mineral Resources.

But during 2020, 12 to 15 foreign flag vessels were working on wind energy projects in Northeast U.S. waters, compared to eight to 10 U.S. flag vessels, Smith estimated.

Operated by companies often based in Norway and the United Kingdom, the vessels are typically manned by mariners from nations including Russia, Ukraine and India, paid about half compared to pay rates for U.S. mariners – at a time when 11,000 American mariners have lost work during the covid-19 pandemic, said Smith.

Smith said members of his association have reported losing contracts to foreign vessels whose owners can outbid with 25 percent lower day rates.

Those foreign crews work in the industry under a special visa program for mariners that should be reformed, said Smith.

“I think those (crew) visas should follow the nationality of the (vessel) owner. If you have a Norwegian vessel, you should hire a Norwegian crew. If you don’t want to hire Norwegians, you should be employing an American crew,” he said.

Subcommittee chairman Rep. Alan Lowenthal said he and colleague Rep. John Garamendi, both D-Calif., will sponsor an amendment to the Outer Continental Shelf Lands Act to address the situation Smith talked about. There is a long history of OMSA and its supporters in Congress pushing to preserve Jones Act protections for the U.S. offshore industry from more foreign competition.

That’s been focused for years on the Gulf of Mexico oil and gas industry, but now offshore wind is the new arena. 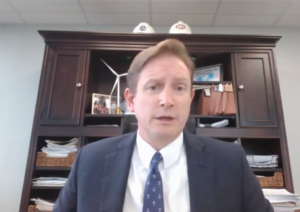 Some of the existing Gulf of Mexico fleet has already been working on the first projects, like the Block Island Wind Farm when U.S. flag lift boats came north to work on the Rhode Island project.

Meanwhile Dominion announced plans to build the first U.S. flag WTIV – a project that some industry observers have estimated could carry a price tag north of $450 million. That will be a step in Dominion’s long-range plans for turbine arrays producing up to 2.6 gigawatts of power.

In the meantime, Smith says Congress should take steps to ensure U.S. mariners get a fair opportunity in the wind business.

“There are numerous ways we can level the playing field between U.S. vessels and foreign vessels,” said Smith. Foreign crew visas should be limited, and operators “should face the same rules” as in the Gulf oil and gas industry, he said.

“We’re having to drag the administration kicking and screaming to enforce our rules on offshore development,” Smith added.