The U.S. Coast Guard Cutter Healy (WAGB 20) returned home Saturday to Seattle following a three-month deployment to the Arctic in support of Coast Guard operations and multiple scientific research missions sponsored by National Oceanic and Atmospheric Administration and the Office of Naval Research.

Healy is the nation’s premiere high-latitude research vessel and is one of the only U.S. military surface vessels that operates in the ice-covered waters of the Arctic. Homeported in Seattle with a permanent crew of 87, Healy is the Coast Guard’s largest cutter at 420-feet and a displacement of over 16,000 tons.

As the nation’s primary maritime presence in the Polar Regions, the Coast Guard advances U.S. national interests through a unique blend of polar operational capability, regulatory authority, and international leadership across the full spectrum of maritime governance.

Earlier this year the Coast Guard released the Arctic Strategic Outlook, reaffirming the service’s commitment to American leadership in the region through partnership, unity of effort, and continuous innovation. 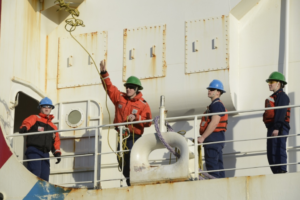 Crewmembers aboard the icebreaker Healy throw lines to shore as the vessel returns to port in Seattle on Nov. 2, 2019. The crew deployed to the Arctic for three months, transiting 14,000 nautical miles. Photo by Petty Officer 3rd Class Michael Clark, U.S. Coast Guard

“While we focus our efforts on creating a peaceful and collaborative environment in the Arctic, we’re also responding to the impacts of increased competition in this strategically important region,” said Adm. Karl Schultz, commandant of the Coast Guard. “Our continued presence will enable us to reinforce positive opportunities and mitigate negative consequences today and tomorrow.”

The Coast Guard has been a leader in the Arctic for over 150 years and the sole provider of the nation’s polar icebreaking capability since 1965. Presently, the Coast Guard maintains two icebreakers – the Coast Guard Cutter Healy, a medium icebreaker, and the Polar Star, the United States’ only heavy icebreaker.

While the Healy deploys annually to the Arctic, the 43-year-old Polar Star is the only cutter capable of supporting Operation Deep Freeze, the annual mission to maintain U.S. presence in Antarctica.

If a catastrophic event, such as a shipboard fire or getting stuck in the ice, were to strand the Healy in the Arctic or the Polar Star near Antarctica, the Coast Guard is left without a self-rescue capability.

The Coast Guard is seeking to increase its icebreaking fleet with six new polar security cutters to ensure continued national presence and access to the Polar regions.