Eighteen days after it went astray in Chesapeake Bay, the 1,095’ container vessel Ever Forward remained aground near the Craighill Channel, defying the best efforts of tugboat and dredge crews to refloat the ship.

The ship was outbound from Baltimore heading down the bay to Norfolk, Va., March 13 when it strayed out of deep water and ran aground. The Coast Guard says it’s still investigating the cause of the incident.

On March 31 ship operators Evergreen Marine Corp. issued a “general average” notice, alerting cargo interests they will be subject to additional costs for delivery of cargo, given the expense of the recovery operation.

After two unsuccessful attempts to dislodge the vessel with dredging and up to seven tugs pushing and pulling, the next backup plan whas been to employ a pair of anchored barges to apply additional pulling power to the ship.

On Monday afternoon the Coast Guard announced the plan now is to first bring in barge cranes to lift containers and lighten the ship.

"Salvage experts determined they would not be able to overcome the ground force of the Ever Forward in its current loaded condition,” according to the statement from the Coast Guard 5th District.

The dredges Dale Pyatt and Oyster Bay continue to work near the ship and will keep digging to a depth of 43’ according to the Coast Guard. Containers will start being removed as soon as two crane barges with suitable lifting heights can be put into position.

“The containers will be removed in daylight hours only for safety purposes from both the port and starboard sides and placed on receiving barges,” the Coast Guard said.. The barges will be used to shuttle containers back to their original onboarding facility at Seagrit Marine Terminal in Baltimore, to be offloaded there by shore-based handling gear.

After the ship is relieved of its containers, tugs and pull barges will try again to pull the ordinarily 42.6’ draft Ever Forward free and back into deeper water. The Coast Guard is now estimating the entire operation make take another two weeks to complete – depending on weather and any unforeseen variables.

The general average statement from Evergreen put its cargo clients on notice that their costs will go up.

“After the incident happened, Evergreen immediately activated its emergency response plan and appointed the salvor Donjon-Smit to conduct underwater inspections and design refloating plan,” according to the general average declaration by Evergreen.

“The program included dredging around the stranded vessel to increase buoyancy and deploying tugboats for the rescue operation. With the approval by the competent authorities, dredging operation began on March 20. Subsequent to the completion of the initial dredging phase, the rescue team made two attempts to refloat Ever Forward on March 29 and 30.

“Unfortunately, both attempts proved to be unsuccessful. The dredging operation and refloating attempts have been conducted for the common safety of the vessel and cargo, and in the interests of all parties involved in the voyage.

“Considering that the complexity of further rescue operations will require more manpower, equipment and costs to refloat the stranded vessel as soon as possible, Evergreen has for cautionary purposes declared General Average and nominated Richards Hogg Lindley as the GA adjuster.”

After dredging, Tuesday’s operation involved five tugs in a first attempt – two pulling on the starboard quarter, one pulling on the stern, and two pushing on the port side, according to a diagram provided by the Coast Guard and Port of Baltimore officials. Strong northwest winds pushed back through the day, with no movement from the 42.6’ draft Ever Forward.

During the second attempt, by mid-afternoon Wednesday a flotilla of a dozen tugs and other vessels clustered around the Ever Forward, according to AIS data on MarineTraffic.com.

As the Coast Guard cutter Sailfish and the Maryland state marine patrol maintained a 1,000-yard safety zone, pushing and pulling continued with a high tide coming up at 6:38 p.m., and the potential for south winds to help ease the ship out. The Moran Towing Corp. firefighting tug Z-One arrived on scene around 5:30 p.m., to make it six tugs putting their horsepower into the last hours of the operation.

But as the high tide passed that evening they were done, and dredges had maneuvered back into position. The Coast Guard advisory projects there will be more dredging around the vessel, and a possible third attempt over the April 3-4 weekend.

The Coast Guard is working with the Maryland Department of the Environment, Evergreen Marine and contractors, with help from the Port of Baltimore. Sediment dredged from around the ship has been placed at the port’s Poplar Island ecological restoration site.

The next scenario will be continued dredging, and another pulling configuration on the weekend. That could use two anchored barges pulling on the stern, plus tugs straining on the ship. Failing that, a next step could be bringing cranes and barges to offload some containers and lighten the ship. 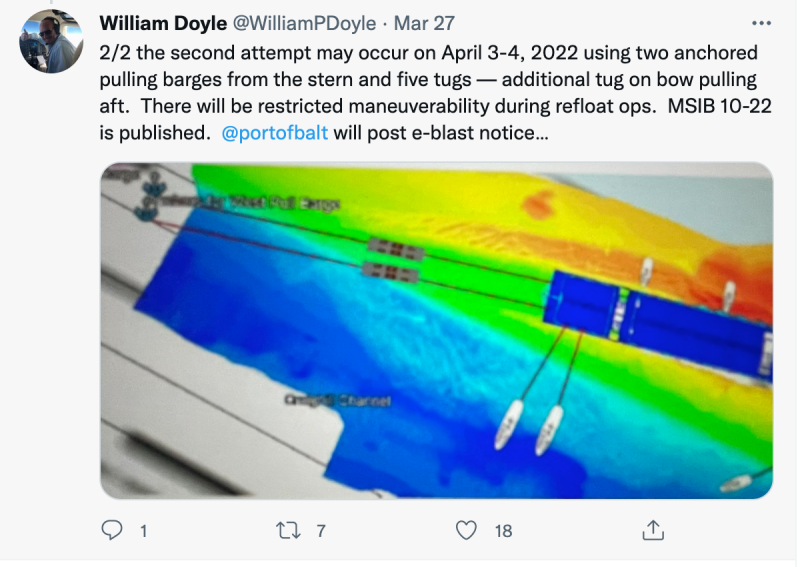 “Evergreen Line urges all cargo interests involved, and joint venture slot users to provide security bonds and necessary documents according to the adjusting rules that govern GA (general average) in order to take delivery of cargo after the vessel is freed and arrives at its future ports of discharge,” the company stated.

A Coast Guard-supervised team on board the Ever Forward has been regularly sounding fuel and ballast tanks, on the watch for potential pollution. A naval architect is also on board to monitor and evaluate the ship’s stability during the refloating operation.