The Coast Guard released Safety Alert 04-22 today. The alert addresses the importance of verifying the correct arrangement of handholds in embarkation gate arrangements aboard merchant vessels.

The Coast Guard is currently investigating a casualty involving a fall from a pilot ladder where the handholds in the gate arrangement aboard the vessel terminated without being rigidly secured to the vessel’s structure. This termination left a gap in the handholds at the transition point at the head of the pilot ladder, where an embarking person might reach to pull themselves onto the vessel (Figure 1). 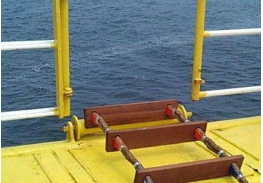 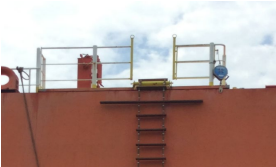 SOLAS 2004 (Consolidated) is clarified by IMO Resolution A.1045 (27) to indicate that each handhold in a gateway arrangement should be rigidly secured to the ship’s structure at or near its base (Figure 3). 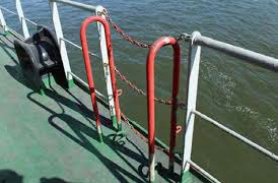 The International Organization for Standardization (ISO) recently published a series of standards aimed at improving pilot ladder safety. These standards supplement existing IMO recommendations and requirements for pilot ladders. Vessel owners and operators, shipboard personnel, and system designers are highly encouraged to review and comply with these standards.

This Safety Alert is provided for informational purposes only and does not relieve any domestic or international safety, operational, or material requirements. Developed by the Coast Guard Sector New York Investigations Division, and distributed by the Office of Investigations and Analysis, please address questions to [email protected].