The Coast Guard is preparing for a new round of five-year contracts to obtain over-the-horizon cutter boats, long-range interceptors and trailerable aids to navigation boats.

With an overall fleet of some 1800 vessels 64’ or less, about 180 boats each year hit their expected 10-year service life, said Mark Porvaznik, manager of the Coast Guard’s boat acquisition program, during a Think Thank session at the 40th annual International WorkBoat Show in New Orleans.

“In the last few years we’ve pumped out about 80 (new) boats a year…so the fleet is aging,” Porvaznik told a full audience including boatbuilders and other suppliers. 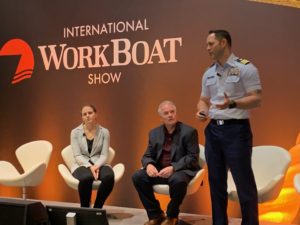 The now-venerable 47’ motor lifeboats’ service life extension contract was awarded in August 2019, and Cmdr. Carlos Crespo, chief of the platforms division in the Coast Guard’s Office of Boat Forces, said planners are moving on to the rest of the list.

The service issued three requests for information (RFIs) to industry in the last two weeks in preparation for three projects: the Over-the-Horizon Gen V cutter boat, the next iteration of the high-speed mainstay of counter-drug patrols, the 25’ trailerable aids to navigation tender, and 35’ long-range interceptors for the national security cutters.

Porvaznik said the OTH V program aims for 200 new boats to be built in 2020-2030 for new cutters, capable of stern ramp operations and single- and dual-davit hoist.

The 25.5’x9.5’, 7,500-pound rigid hulls will have a 150 nautical mile range and top speed of 38 knots, powered by diesel waterjet and equipped with shock absorbing seating.

Testing will lead to selecting the “best value” boat by the end of 2021 and entering production at 20 boats a year, said Porvaznik.

The aids to navigation tender will be a five-year contract for boats equipped with electric winches capable of lifting 500 pounds for buoys and anchors. The 25’x8.5’x2.5’ aft console T-top boats will have dual outboard power, be trailer mobile, and capable of a range of 150 nautical miles at 25 knots with a top speed of 28 knots.

A 2021 test program will lead to selection in early 2022, followed by a rapid production program of 30 boats annually for the last three years of the contract, said Porvaznik.

The 35’ long-range interceptors for the national security cutter are getting some tweaks to hull dimensions, with the goal of eased shipboard handling without affecting stability, said Porvaznik. A request for proposals should be out in September 2020, with 2021 testing and selection to be followed by a 15-boat contract.

The small boat planning team is looking for other ideas from industry too, including:

Waterjet controls that are more intuitive and easier to operate at low speeds.

Boat construction that reduces the chance of failures from notch impact when cutter boats run up stern ramps.

The Coast Guard is open to new propulsion systems for OTH cutter boats too, Porvaznik said: “If anyone’s got a way to get away from waterjets to something that doesn’t get torn up in notching, we’ll consider it.”

A system of “real-time operating links feedback” would be useful for measuring and warning of the impacts of hard use on both boats and people, said Porvaznik: “I’m looking for something that feeds back to the coxswain that says, ‘You’re exceedin