The most dangerous sharks in the world

Car accidents and sharks have something in common. While both can be scary, it’s hard not to look. In fact, the uglier, the more intriguing.

Data from the Florida Museum of Natural History’s International Shark Attack File (ISAF) shows that in 2021 there were 73 unprovoked shark attacks, with nine deaths, and 39 provoked attacks worldwide.

Who, you might ask, is provoking a shark? Well, the answer is easy: idiots.

Earlier this summer, Boatline presented its list of the six most dangerous sharks and where they live.

No. 1 is the great white shark. “The largest predatory fish in the world, and the most well-known species of shark, is the great white,” according to Boatline. “Great whites can reach lengths of up to 20 feet and weigh in at several tons. ISAF cites the great white as the species most implicated in attacks due to its size, power, and feeding behavior. Great white sharks are a highly migratory species found in open waters around the world. They hunt throughout the year along the central California coast, off the western cape of South Africa, as well as in North American waters from Newfoundland to Florida and Alaska to southern Mexico.” 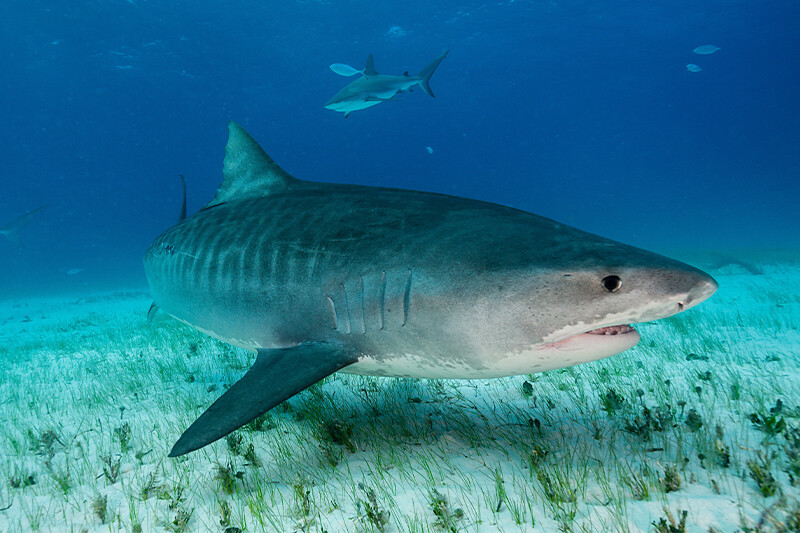 Two is the tiger shark. “Tiger sharks get their name from the gray vertical stripes along the side of their bodies, making them easily identifiable,” Boatline’s report said. “While tiger sharks are often unaggressive during human interaction, they should still be treated with great caution since they are one of the three species most likely to attack. This species is found predominantly in shallow, coastal waters, but they do use the open ocean to travel between islands. Tiger sharks are found in tropical waters worldwide, with the exception of the Mediterranean Sea. There have been reports of tiger sharks as far north as Iceland, but most concentrations are in the western Atlantic, Indian Ocean, and western Pacific.” 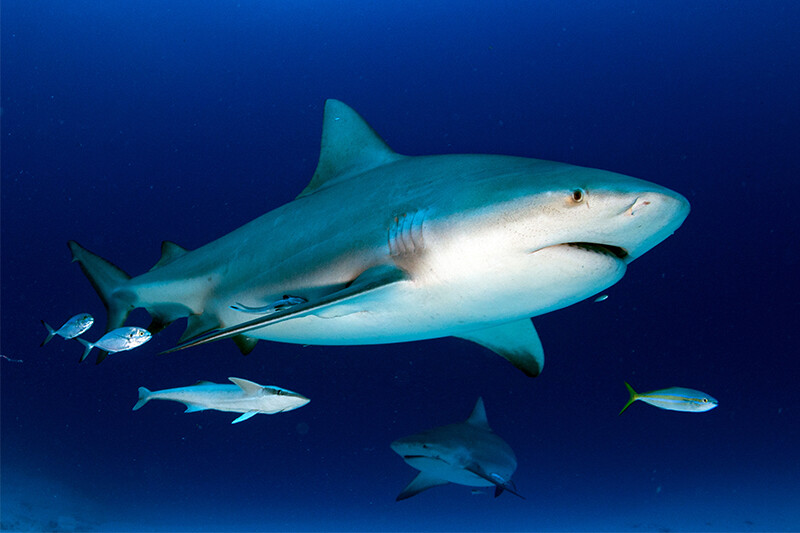 Coming in at No. 3 is the bull shark. “The last of ‘The Big Three’ deadliest sharks is the bull shark. ISAF notes over 100 unprovoked attacks on humans by bull sharks over the years, however this number could be higher since this species is harder to identify compared to the white or tiger shark,” Boatline said. “Bull sharks can move from coastal seas to large freshwaters, such as lakes and rivers. This puts them into contact with humans more than most species of sharks. There are reports of bull sharks in the Amazon River in Peru, the Mississippi River in Illinois, and Lake Nicaragua. Coastal concentrations range from the western and eastern Atlantic, Indo-West Pacific, and eastern Pacific.” 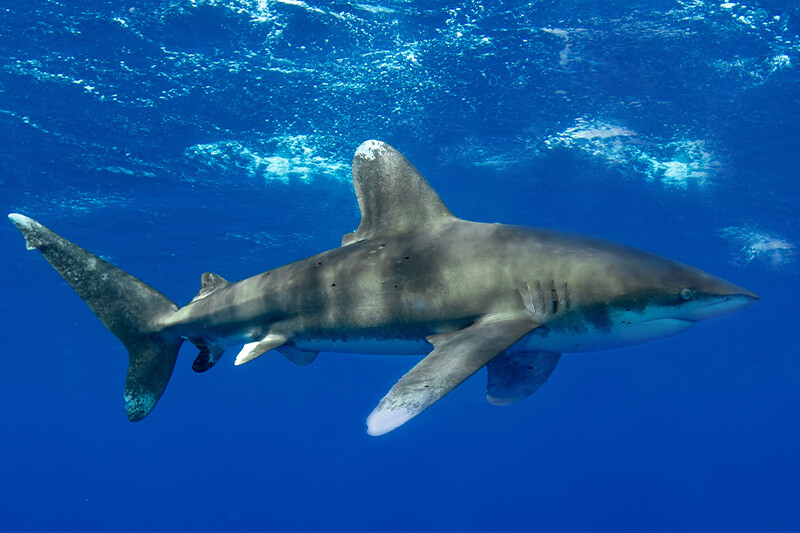 No. 4 on Boatline’s list is the oceanic whitetip shark. “Oceanic whitetips get their name from the white tip on their dorsal, pectoral, and tail fins,” the report said. “These sharks have been sighted in ‘feeding frenzies’ after mid-ocean disasters, such as boat wrecks and downed planes. They have also been known to persistently circle divers they encounter. Similar to the great white, the oceanic whitetip is a highly migratory species, swimming in open oceans around the world. The distribution of oceanic whitetips ranges from subtropical waters between 30°N and 35°S latitude. This includes the western and eastern Atlantic, the Mediterranean, the Indo-Pacific, and the eastern Pacific.” 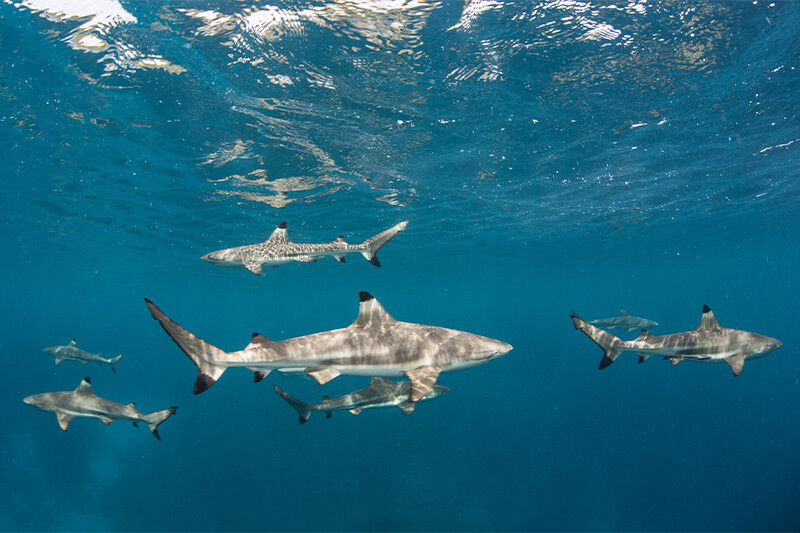 Next on the list is the blacktip shark. Boatline said, “The blacktip shark has similar features to the oceanic whitetip, except with black on their dorsal, pectoral, and tail fins. Attacks by blacktips typically result in minor injuries to swimmers and fishers throughout the world. These sharks tend to stay close to the coasts, but can be found both inshore and offshore. Blacktip sharks are in abundance in the Gulf of Mexico and Caribbean Sea. During their migration in the Atlantic, they travel from Massachusetts to Brazil. In the Pacific, blacktips range from southern California to Peru, including the Sea of Cortez, along with Hawaii, the Galapagos Islands, Tahiti and other South Pacific Islands. Concentrations can also be found throughout the Mediterranean, as well as along the coast of West Africa.” 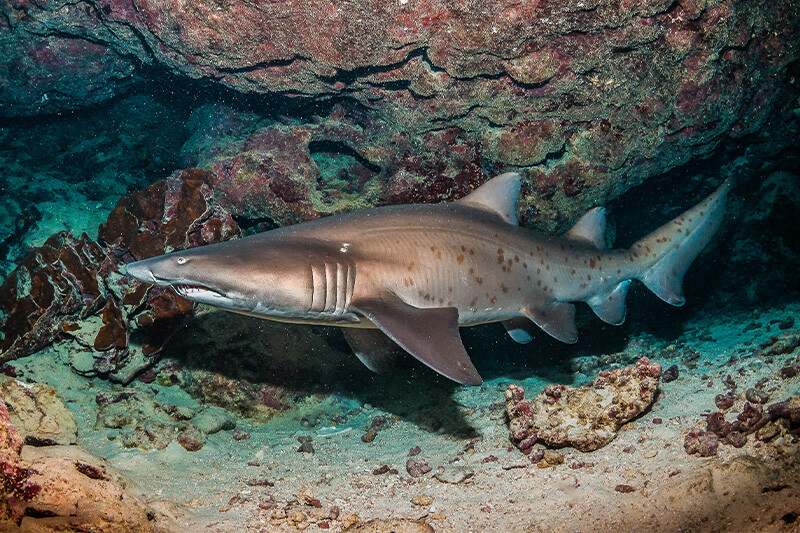 And finally, at No. 6, is the sand tiger shark. “The sand tiger shark, also known as the gray nurse shark, is a slow-moving shark whose light-brown skin can blend into its surroundings. Despite their intimidating size and protruding teeth, sand tigers are not aggressive unless provoked. There are, however, reports of sand tigers biting spearfishers and stealing their fish underwater. Sand tigers lurk in subtropical to warm waters worldwide, except for the eastern Pacific. In the western Atlantic, sand tigers are commonly found in Cape Cod and the Delaware Bay during the summer months. There are also concentrations of these sharks in the coastal waters of Europe and the Mediterranean, South Africa, and the Indo-West Pacific.”

One species of shark that Boatline failed to mention is the land shark. Made famous in Jimmy Buffet’s song “Fins”, these sharks “hang out in the local bars and they feed right after dark.” They are the only known species of shark that drinks alcohol, which can have a serious affect on their behavior. They can operate on both land and sea and can be found in all places around the world. They are also the only shark species that can drive.

To me, that makes them the most dangerous.