With the August Democratic presidential nominating convention fast approaching, presumptive nominee Joe Biden is narrowing down his short list for a vice presidential running mate. As promised, all 12 are women, and one is considered to be an influential advocate in Congress for the inland waterways.

She is Tammy Duckworth, a Democrat from Illinois who was elected to fill Barack Obama’s Senate seat. She is also an Iraq War combat veteran and Purple Heart recipient, the first disabled woman and Thai-American to be elected to Congress, and the first senator to give birth while serving in Congress. If chosen and Biden wins the White House, she would become the first vice president with a deep legislative history of helping improve the nation’s crumbling inland river lock and dam infrastructure.

Last year she was awarded the Leadership Service Award from the Waterways Council, which recognizes members of Congress who work to secure funds and policy changes that benefit the waterways. WCI called her a “tireless advocate for the nation’s inland waterways lock and dam infrastructure.” 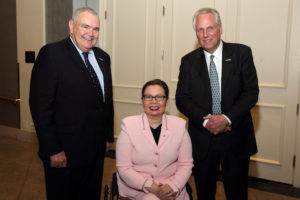 After receiving the award, Duckworth said: “Improving our waterways means strengthening our nation’s security and economy. So I promise to keep working to rebuild America’s infrastructure, one bill, one barge, one lock and dam at a time.”

Most recently, she helped guide through the Senate Environment and Public Works Committee a water resources bill that authorizes billions of dollars in federal spending for water projects and includes a key change in the Inland Waterways Trust Fund that the barge industry says will help expedite inland projects and bring the navigation system into the 21st century.

A top priority for the industry, that change would modify the cost sharing formula that is used to fund construction and major rehabilitation of inland infrastructure by increasing the federal share to 65%, with 35% being paid by commercial barge users through a diesel tax deposited into the Trust Fund. The current formula is an even 50/50 split. The bill now faces a vote in the full Senate.

Duckworth has also worked with fellow Democrat, Sen. Dick Durbin of Illinois, to secure federal funds to combat the spread of invasive Asian carp into the Illinois River and Great Lakes.

The Biden campaign has begun vetting Duckworth’s credentials and has interviewed her, and according to The New York Times, is taking her “pretty seriously” as a candidate. She is considered a “safe” choice by many, as she offers more positive attributes than negative, with experience in the House and Senate and deep knowledge of veteran’s and military affairs, credentials as a working mom with two children under the age of five, roots near Midwest battleground states, and possessing a compelling story as a veteran who lost both her legs after the helicopter she was piloting in Iraq was shot down by insurgents in 2004.

Additionally, with a moderate voting record on issues, she would be at ease advocating Biden’s agenda, and would be a less polarizing figure than let’s say Massachusetts Sen. Elizabeth Warren, a guardian of the left, who is also on the list. At age 52, Duckworth also offers the advantage of relative youth against Biden’s 77 years.

But her selection could be overrun by the pressures of the moment on Biden to choose a woman of color. The massive protests after the death of George Floyd at the hands of police have forced a national reckoning about race and inequality.

Duckworth has hinted that if asked, she would accept the No. 2 spot: “I personally have always answered the call when my country has asked me to serve,” she has said.

It would not be a big loss for the waterways should Biden go with another choice. Although it’s always a plus having an advocate in the White House, Duckworth might be more effective from her perch in the Senate, where she can continue to influence policy and funding on river infrastructure, something a vice president can’t control.

Approval of key waterways bill likely to be delayed

Senate panel seeks change in funding for locks and dams