The DryMax seal from Duramax

The DryMax® seal from Duramax Marine® is a robust, environmentally-friendly, water-lubricated stern tube seal system. The DryMax Seal was launched at the Workboat show in 2016. Since that time the seal has gained major market acceptance and is now successfully running on over 200 commercial vessels.

One successful arena for the DryMax seal has been in the inland river towboat market. According to Duramax Sales Manager Tracy Pearman, “Our new seal works exceptionally well in the brown water environment.  We recently replaced 2 sealing rings in a towboat that had been in operation more than two years showing very little wear.”

Indeed! Duramax Engineers were delighted to find almost no wear on the rubber sealing rings and only minor wear on the DuraChrome® mating ring. With only a slight resurfacing of about .010” on the mating ring and a new rubber sealing ring the boat was ready to go back in the water. Pearman noted, “The customer chose to replace the sealing elements however they could have easily been placed back into service.”

On the heels of the successes with the DryMax stern tube seal, Duramax Marine is please to introduce an 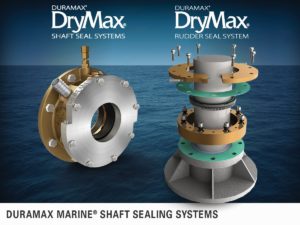 extension to the product line; The DryMax Rudder Sealing System. Michael Schonauer, Vice President of Marketing said, “The DryMax stern tube seal is a fantastic seal so it makes sense that when used as a rudder seal the DryMax seal works flawlessly. We really like that It can operate completely dry when sitting above the water line without the addition of any lubricants or grease, so it makes it an environmentally friendly seal!” Also, just like the stern tube seal the DryMax rudder stock seal will not cause any wear to the shaft or stock.

Both the DryMax® stern tube seal and rudder seal have Full ABS and Lloyd’s Type Approvals.

For more information see us at Work Boat Show Booth #2001