Environmental groups went to federal court Oct. 21 with a lawsuit claiming the Trump administration is violating the Endangered Species Act by an inadequate interagency consultation on oil and gas operations in the Gulf of Mexico.

The San Francisco-based legal foundation Earthjustice filed the action on behalf of the Sierra Club, the Center for Biological Diversity, Friends of the Earth and Turtle Island Restoration Network. The lawsuit attacks an assessment of the hazards that offshore oil and gas drilling and production pose to endangered marine species, issued in March by the National Marine Fisheries Service.

In an earlier 2018 lawsuit filed in a federal court in Florida, Earthjustice and other groups complained NMFS and the U.S. Fish and Wildlife Service had unreasonably delayed developing a new biological opinion – or “BiOp” in the argot of federal bureaucracy – to evaluate impacts as required by the Endangered Species Act.

The law requires certification that government actions – such as permitting offshore drilling – won’t harm endangered species. The last biological opinion was issued in 2007; BP’s Deepwater Horizon accident and oil spill in 2010, with its sweeping environmental impacts and losses of marine life, triggered the process for a reassessment of the dangers.

In response to that court case, NMFS completed the new assessment and issued it March 13. The report dealt with the range of Gulf of Mexico species protected by the law, including whales, sea turtles, corals and imperiled fish species like sturgeon. 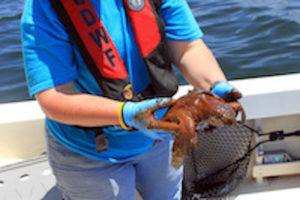 The new lawsuit, filed in the federal court in Greenbelt, Md., near NMFS headquarters, contends the March assessment failed to fully account “for post-Deepwater Horizon population or habitat changes when assessing the effects of the program on ESA-listed species and habitats.

“And the agency once again arbitrarily assumed—as it did in 2007—that an extremely large oil spill will not result from Interior’s oil and gas program,” the complaint states. “The BiOp is riddled with other inadequate analyses and flaws that violate the ESA

“For example, NMFS ignored sublethal harms from the program and the increasing effects of climate change when assessing jeopardy, and failed to consider how the program will impede the recovery of species (as opposed to threatening their survival). And the BiOp’s incidental take statement and reasonable and prudent alternatives fail to meet what the ESA legally requires.”

The lawsuit lists objections to the new agency analysis. “Chief among NMFS’s errors are its failures to correct the admittedly flawed oil spill analyses from the 2007 biological opinion and to incorporate post-Deepwater Horizon population and habitat changes into the jeopardy and adverse modification analyses, as well as its failures to account for other important factors or use the best available science,” it states.

The lawsuit asks the court to order NMFS back to the drawing board and come up with a new analysis within six months.