As tugs and pushboats become larger and more complex, one sector of the industry is growing by staying small. The truckable towboat is having its moment and Marine Inland Fabricators (MIF) is happy to meet the growing demand.

Located on over five acres of waterfront property on the Intercoastal Waterway, the Panama City, Fla., shipyard has not had a moment’s rest since being slammed by a Category 5 hurricane last year as more companies are looking for the portable, powerful pushboat solution the company offers. 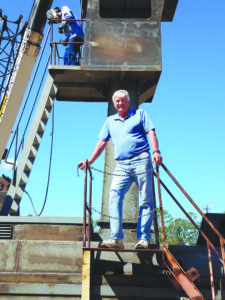 Rudy Sistrunk is president of Marine Inland. He has spent his entire career in shipyards. A Morgan City, La., native, Sistrunk cut his teeth in the engineering department at Swiftships, one of the city’s main yards. He moved around the Gulf working in new construction, production management and service. He landed in Panama City with a rich portfolio of experience in production building and custom project management as well as operations. This proved to be the ideal skill set when he took the dive and purchased Marine nland Fabricators in 2005.

“It was the best decision I have ever made,” Sistrunk said. “My wife Jeanie and I worked side by side on our terms.”

Marine Inland specializes in building a simple design created in the 1980s by Randy and Ricky Lee who opened the yard with their father. The idea was to design a jobsite boat that would be powerful enough to move marine contractors’ equipment and material, and yet be trucked as a legal load. The result was the Clydesdale truckable towboat model, a 25’3″x14’x5′ hull with a draft of 4′. The wheelhouse is on a pedestal that bolts onto the hull and can be quickly unbolted for trucking. The boat does not require a Coast Guard licensed captain to operate it since it is under 26′.

The yard also builds other versions of the truckable towboat, but the Clydesdale remains the most popular. The boat is typically powered by twin John Deere 6068AFM85 M3 engines each rated at 300 hp at 2,600 rpm. The engines are matched to ZF 301 gears. The compact Deere engines are well suited to the small envelop and were not offered by other manufacturers when Sistrunk began building. Horsepower requirements have since climbed. The original Clydesdale used twin 200-hp engines. As the barges and boats being handled became larger, the 400-hp model was not powerful enough.

“I will build whatever the customer requires,” said Sistrunk. “I spent many years working in operations and was the customer, so I am sensitive to the needs of each particular operator.” 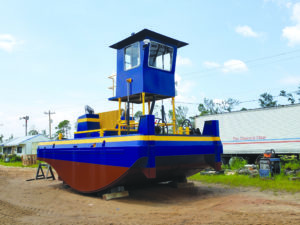 Marine Inland Fabricators builds many variations on the theme of what Sistrunk calls a “transportable” boat. The yard builds the production model with a beam up to 20′ and a depth of 6’9″. The length remains just under 26′. These boats are mainly used by marine contractors, bridge builders, and dredging companies as dredge tenders. MIF also builds boats for the Army Corps of Engineers for lock and dam maintenance. MIF is currently building a multiboat order for the New York State Canal Corp. Larger 33′ dredge tenders operate in Nigeria and Columbia.

Newt Marine Service, a marine services company based out of Dubuque, Iowa, operates on the Upper Mississippi, Missouri, and Illinois rivers, as well as inland midwestern lakes. The company uses truckable pushboats to help it handle a mix of dredging, marine construction, towing, fleeting, repair, and marine equipment leasing.

“We utilize truckable equipment, both truckable pushboats and sectional barges, extensively in our business, both for our own use as well as offering those items for lease to other contractors,” said Jake Altfillisch of Newt Marine. “Truckable pushboats in particular offer many advantages including portability to otherwise inaccessible bodies of water, as well as a cost savings when compared to traditional boats in situations where high horsepower isn’t necessarily needed.”

Once at the jobsite, the pushboat is quickly assembled for work. The wheelhouse controls and hydraulic lines are tucked into the pedestal that holds the wheelhouse. The engines are plug and play, and after reconnecting the wheelhouse, it is back to work.

Sistrunk said that when he first came to MIF, there were 12 people working there and two boats under construction. “I applied what I had learned from big boatbuilding to building the truckables,” he said.

Sistrunk began by studying the process. Welders were busily cutting, fitting and welding each boat. Then the whole boat was blasted and painted. The first manufacturing change Sistrunk made was to order steel pre-cut on a precision CNC table, pre-blasted and pre-primed. “Now it is like putting together a jigsaw puzzle.” 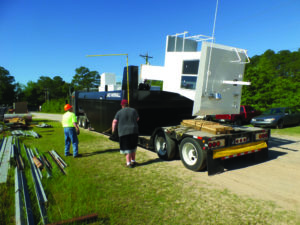 Currently, there are 15 boats under contract and it takes about eight to 10 weeks to complete a vessel. Since he purchased the yard, Sistrunk has built 215 boats. The yard employs 45 people.

Improvements in the boatbuilding process have increased productivity and  made for a better boat in general, according to Sistrunk. “By building with pre-primed steel, we can paint the inside spaces as well, and give them a nice finish,” he said. “I have also used press-broken rails on the top of the bulwarks, that saves a huge amount of welding and minimizes the corrosion risk.”

Sistrunk also added dripless shaft seals to reduce wear and tear on the shafts. Lately, MIF is designing a wheelhouse that folds down rather than detaches for trucking and adding a larger pedestal if requested to increase height of eye.

On Oct. 10, 2018, Panama City took a direct hit from Hurricane Michael, a category 5 storm with maximum sustained winds topping 161 mph. The shipyard was secured as well as possible but still lost its building.

“The landscape was totally changed,” Sistrunk said. “My 42-foot trawler was tossed into the junk pile.”

With orders to fill, the yard was back at work before the power was restored. Thirty days passed before the yard had power. “We cleared debris and rented diesel welders and went to work, even though our building was in a pile. We are lucky down here. The weather is generally mild, so we have been able to build outside.”

A new building is under construction that will have capacity for five boats to be built under cover. It will also house office space for Sistrunk and his three sons, Dorman, Bradley and Ryan, who have joined the business.

The expansion comes at a good time for Marine Inland, which is experiencing an uptick in sales. Some of the orders are related to the recent implementation of Subchapter M, the new law requiring a Coast Guard inspection regime for towing vessels over 26’. The wide-ranging requirements of the new regulations have made companies with older towing vessels take a hard look at their boats. The economics of spending thousands of dollars to comply versus purchasing a new smaller boat that doesn’t fall under the new inspection regime has brought new customers to the yard.

“People are looking at their older boats and deciding to go with a boat under 26 feet,” Sistrunk said.

Kathy Bergren Smith has been a correspondent with WorkBoat since 2002. She is also a writer and photographer for the Port of Baltimore Magazine covering shipping and port activities. Smith, also a noted commercial and fine art photographer, resides in Annapolis, Md.