Technological innovations are changing expectations across the maritime industry. Drones are being used to provide security and surveillance, while automation and artificial intelligence (AI) solutions are being deployed to significantly lower costs. These advances are being driven by the need to increase efficiency while also addressing previously overlooked environmental challenges.

A new solution from Jotun Paints does both of those things for an issue that has plagued the industry for decades.

The accumulation of fouling on a ship can lead to a drop in performance but the many anti-fouling coatings that are available don’t completely resolve the issue. Simply put, the technology used to date has not been able to guarantee an always clean hull, thereby enabling the transfer of invasive species through biofouling. These challenges and solutions are something that Jotun, a Norwegian company that has been around for nearly a century, knows very well. That knowledge has compelled their efforts to mitigate the impact of hull biofouling and introduce a proactive hull efficiency, cleaning and inspection innovation with Hull Skating Solutions (HSS).

Engineered to keep the hull free of fouling at all times, the HullSkater is the first robotic device that has been purposely designed for proactive cleaning. The inspection and cleaning capacity of the product allows it to remove fouling without damaging anti-fouling coating. The specific ways that it is set to impact operational efficiency and environmentalism are worth further exploring. 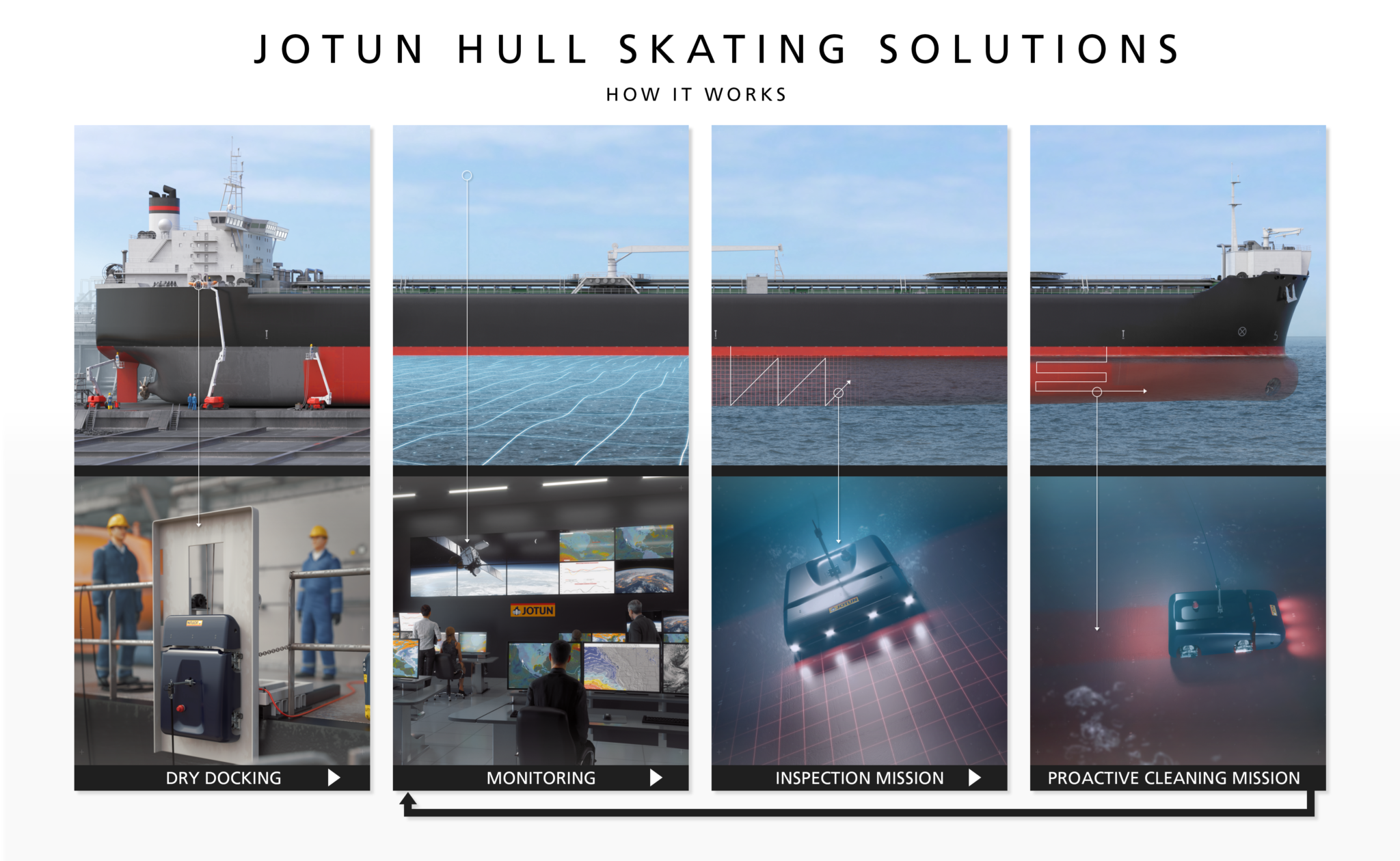 The impact of hull biofouling

Ship operators are always on the lookout for anti-fouling coatings for specific operating conditions, but these solutions have their limitations. Paint alone cannot handle challenging trades, as a ship can be sailing in fouling rich waters, extended idle periods or a combination of both. Those limitations are even more pronounced since they can have such a negative impact on the environment.

The drive to reduce the harmful environmental effects of species transfer has prompted guides for the control and management of ships’ biofouling to minimize the transfer of invasive aquatic species. There’s so much more to the environmental impact that traditional anti-fouling solutions can have though.

“In recent years there has been a growing focus on the environmental impact of shipping,” said Adam Stuchlik, Marine Sales Director for Jotun Paints. “The major focus is on engine emissions such as CO2, SOX and NOX. Surprisingly, even a thin layer of algae on a ship’s hull has been shown to increase fuel consumption and emissions by 9%.”

Hull fouling causes a number of problems including increased fuel cost, increased emissions as well as the transmigration of invasive species. Solutions to address such issues have been limited, but Hull Skating Solutions addresses all of them in a major way. In fact, it has compelled the company to say that this product will solve the biofouling problem once and for all. How exactly will it do that though? 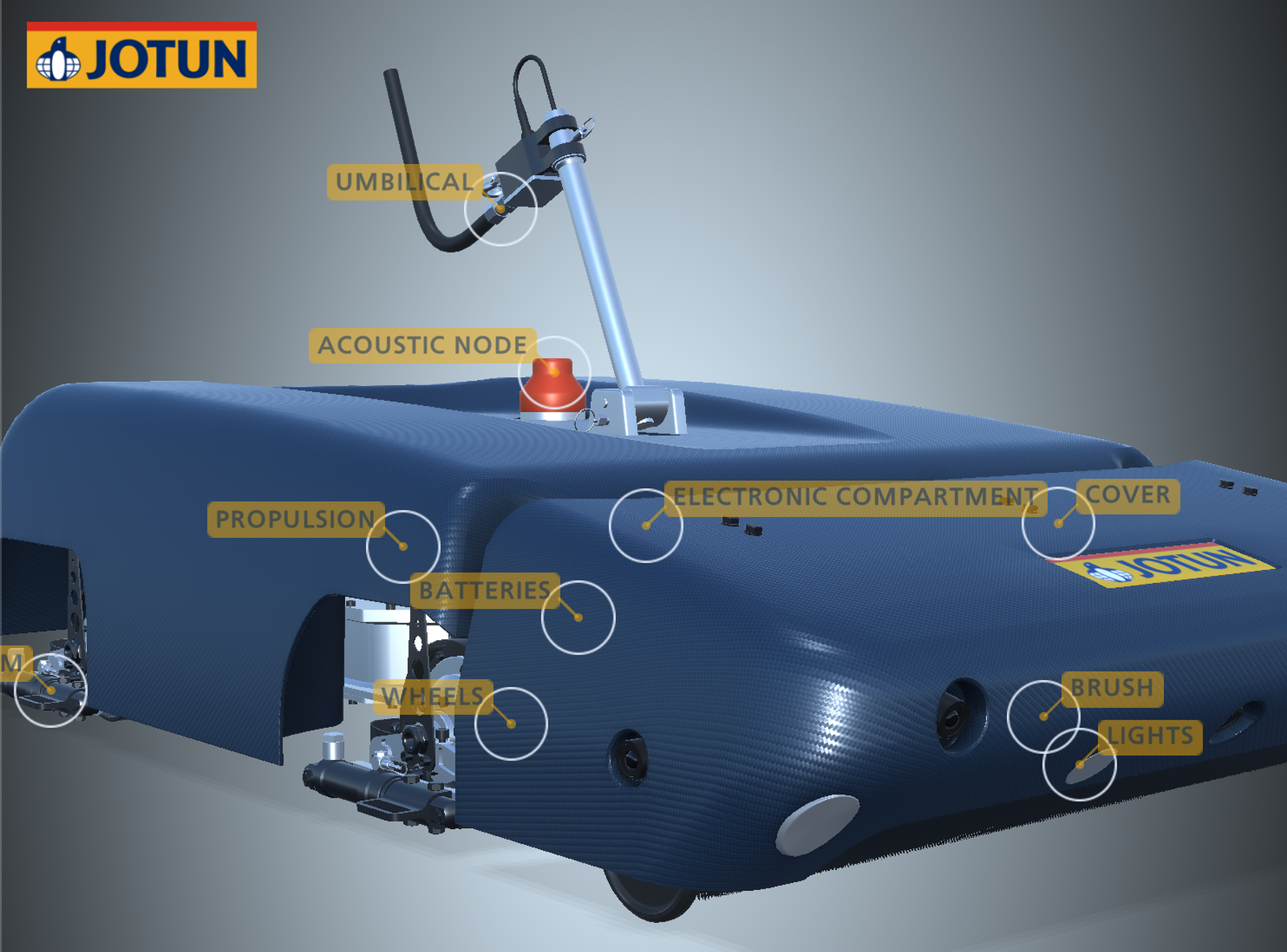 Jotun Hull Skating Solutions is made up of several distinct elements. All of these pieces are controlled by one party to provide operators with a complete solution. The vehicle can be operated remotely for vessels anywhere in the world with 4G coverage. Operators are based in hubs all over the world in order to ensure coverage in any location at any time.

The HullSkater is an advanced underwater robot installed during docking, remotely operated by a Jotun Skate Operator. The SeaQuantum Skate is the high-performance coating included in the solution while the Jotun HullSkater is executing the inspection and proactive cleaning. High-end and technical service includes a dedicated project manager in dock, following paint application, HullSkater installation, operation by a Skate Operator and service and support.

The HullSkater stays attached to the hull via magnetic wheels and is powered by an onboard battery. The cleaning brush is designed to deal with the fouling efficiently while avoiding damage to the coating. The HullSkater is always kept onboard in a portable station with launch and recovery ramp. This means that it is always available and can be used when the ship is in harbor or at anchor.

“Hull Skating solutions provides an always clean hull,”Stuchlik told Workboat. “The invasive species issue is becoming more prominent today with increasing focus from authorities in New Zealand, Australia, California and others. There are more and more stories emerging of vessels being denied entry to ports due to the potential transmigration issue. As such Hull Skating Solutions can be a huge benefit on numerous fronts.”

Many of those benefits are tied into the concept of what it means to address an issue before it becomes a problem, and doing so makes a difference operationally and to the environment. When fouling becomes a major problem its often too late to deal with it in a gentle way. If the hull is covered in hard fouling like barnacles you need to use very aggressive cleaning methods which will damage the coating leading to increased roughness, fuel consumption and further fouling. Vessel owners in challenging trades or those who want maximum flexibility will see those differences, but they’re just the beginning of the impact HSS could enable.

HSS is targeted at vessels that operate in fouling rich waters, have extended idle time or a mixture of both. Such vessels are likely to have struggled with fouling and perhaps even accepted it as an unwinnable battle. These battles can now be fought and prevented in a whole new way.

“With HSS, the tide has turned and there is a consolidated and effective way to combat fouling,” Stuchlik continued. “It’s keeping fuel cost under control that will be the most obvious benefit. Beyond that, the overall benefits include better control of transmigration, unlimited idle time protection and 24/7 inspection capability.”

While visions around what a “shipyard of the future” are still being defined, innovations like HSS highlight what kind of technology will be part of that future while simultaneously shaping the present.