On Oct. 10, 2018, Hurricane Michael made landfall in Florida’s Panhandle, devastating the livelihood of residents in Bay County and surrounding counties, including Panama City, Fla.

Residents proved their resiliency by adopting the motto, “850 Strong,” and by relying on those who came to help — whether family, neighbor or stranger from hundreds of miles away who answered the call to provide and distribute needed supplies. 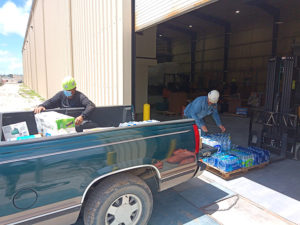 Just short of two years since Hurricane Michael devastated the Florida Panhandle, Eastern and its employees are giving back the same sort of care and aid to those impacted by Hurricane Laura that was offered to them. Eastern Shipbuilding Group photo

No stranger to the necessity of community after a major disaster, Eastern Shipbuilding Group and its employees have jumped in to help those hit hardest by Hurricane Laura by holding a companywide hurricane relief supply drive. Laura, which made landfall near Cameron, La., as a category 4 on Aug. 27, brought 150-mph winds and close to a 15-foot storm surge. As residents of Southwest Acadiana began to return, they quickly found that their homes and valuables were either severely damaged or destroyed.

Now, almost two years since Hurricane Michael, Eastern and its employees are giving back the same sort of care and aid to those impacted by Hurricane Laura that was offered to them.

In a letter to all Eastern Employees, executive vice president and COO Ken Munroe wrote, “We all know very well the destruction that can be caused by hurricanes as we all lived it during Hurricane Michael. This is our time to return the favor to others who are suffering and to those people that helped us during our time of need.”

Eastern and its employees have already loaded and shipped two truckloads of supplies to those in Southeast Louisiana and is looking to fill a third. “The destruction caused by Hurricane Laura to people’s homes, businesses, stores, churches and livelihoods has caused great pain and suffering. Your donations will help ease the pain and give those people hope for recovery.