With its rock-steady 49’ hull and 225 square-foot work deck, the Nauvoo was the Coast Guard ideal of a small buoy tender. Now it makes a great classroom, certified for 20 miles offshore.

“Now we can take the full class out with a professor and do an oceanographic cruise,” said John Tiedemann, assistant dean of the science school at Monmouth University, as the renewed Nauvoo was introduced Wednesday at Highlands, N.J.

It went into warm layup in 2016 for budget reasons, and was shopped around other NOAA programs with no takers. Then word got to their colleagues at the Urban Coast Institute at Monmouth University in West Long Branch just down the road.

The Monmouth University scientists have long done cooperative work with NOAA, and a deal was struck with help in Congress to transfer the vessel at no cost. Donors then helped the university with around $120,000 in upgrades done at the Yank Marine yard in Dorchester, N.J.

“Even if you spent $250,000 it’s still a bargain,” said Jim Nickels, a marine science professor and the Nauvoo’s captain. “The surveyor estimated to do a newbuild like this would be over $1 million.”

The mil-spec quality is one reason. “This was one of two prototypes (of the 49’ BUSL) that were built at Bellingham” in Washington state, said Nickels.

That gave it some nonstandard features, like an early Perkins 22kW genset for ship’s power.

With twin 8V-71 Detroit Diesel engines turning 350 hp each through Twin Disc 2.5:1 gears, the Nauvoo has a 300-mile range at service speed of 10 knots. Nickels says the maximum fuel consumption at that range is rated around 13 gals. per hour.

“The 871s, they run forever. You don’t have to mess with turbos or stuff. It’s funny, on one engine she will do around 7 knots, you kick in the other and it adds like a knot and a half,” he said.

That mileage got the Nauvoo all around the New York Harbor approaches and up the Hudson River in its days doing fisheries and environmental sampling for NOAA. It will do much of the same in its new role, including tracking the endangered Atlantic sturgeon in the Hudson and around planned offshore wind energy turbine areas just offshore.

“We have the ideal laboratory in this area,” said Tony MacDonald, director of the Urban Coast Institute. The apex of the New York Bight is a locus of nearly all the competing economic demands and environmental issues facing the United States coastline, from pollution and habitat restoration to conflicts between existing maritime uses and new demands like wind energy.

“This boat is such a game changer that we already have other universities in the area asking if they can use it,” said Monmouth University president Grey Dimenna.

So will some of its old crew from NOAA, said Beth Phelan, director of the Sandy Hook laboratory. The Nauvoo’s third act has already been very much a cooperative venture, with former NOAA captain Peter Plantamura advising the Monmouth University team and helping out on his old boat.

“I started out at Monmouth University as a student,” said Plantamura. He did time as an entry-level deckhand on another NOAA boat, along with fishing and other maritime work, and worked his way up to run the Nauvoo for about 10 years.

“We did trawling up the Hudson, sediment sampling,” even rescuing a whale tangled in fishing gear, said Plantamura. On Wednesday he was back in one of his old places, the aft control panel, working one of the Pullmaster KPL8 winches to retrieve a sampling net.

Monmouth University officials say they could not have brought a vessel of the Nauvoo’s capabilities back to the region without a lot of support, and they are looking forward to making it a shared resource with other universities and state agency partners.

“It is difficult for institutions,” said Nickels. “It is a big-ticket item.” 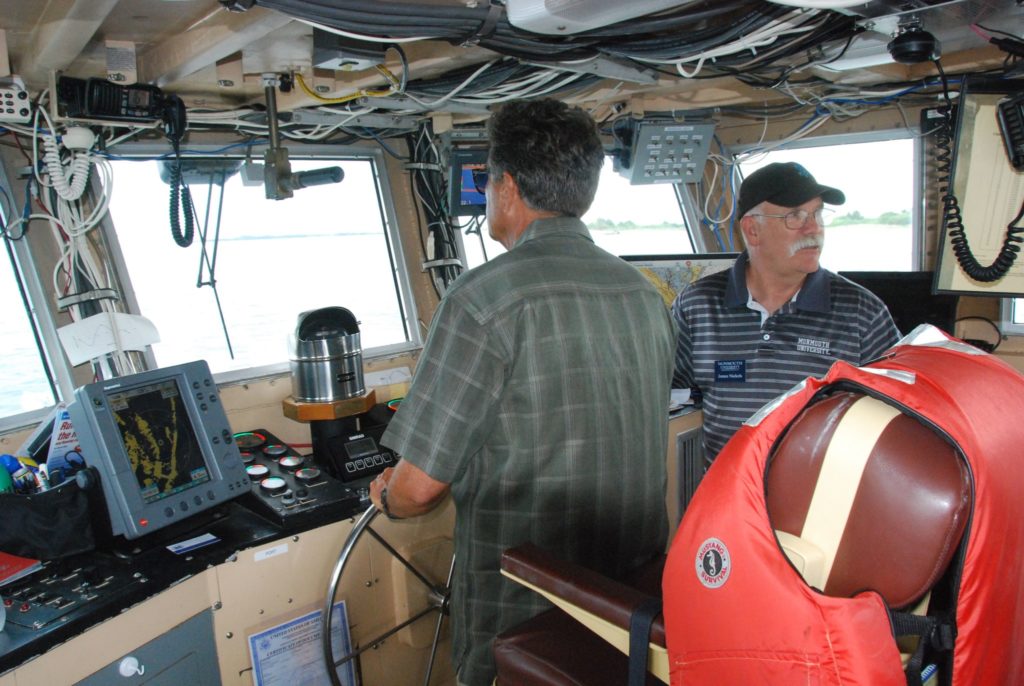 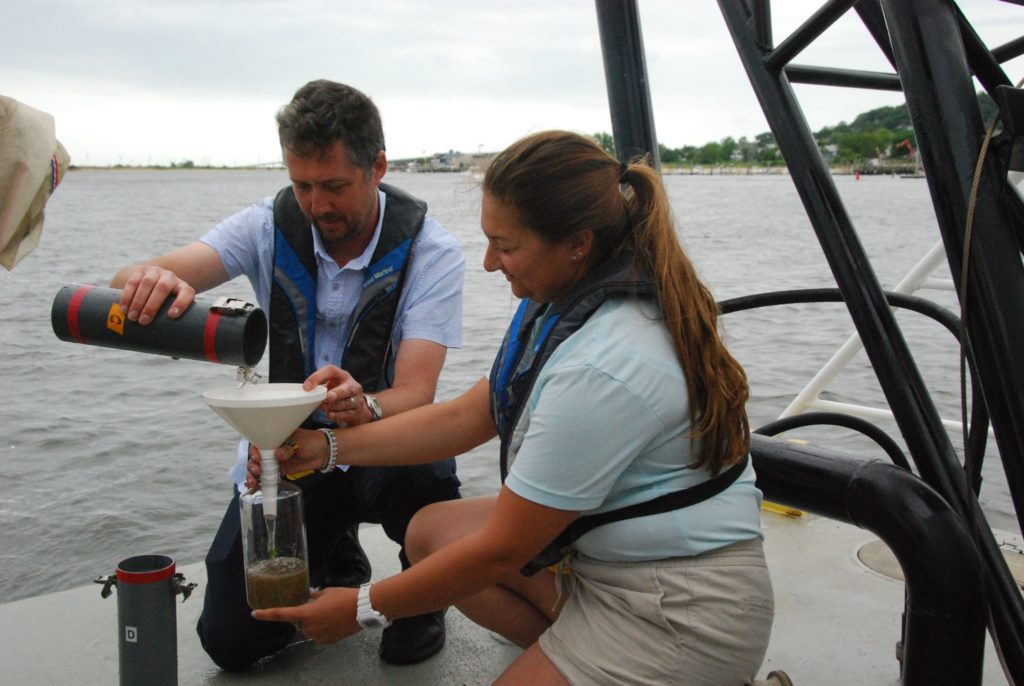 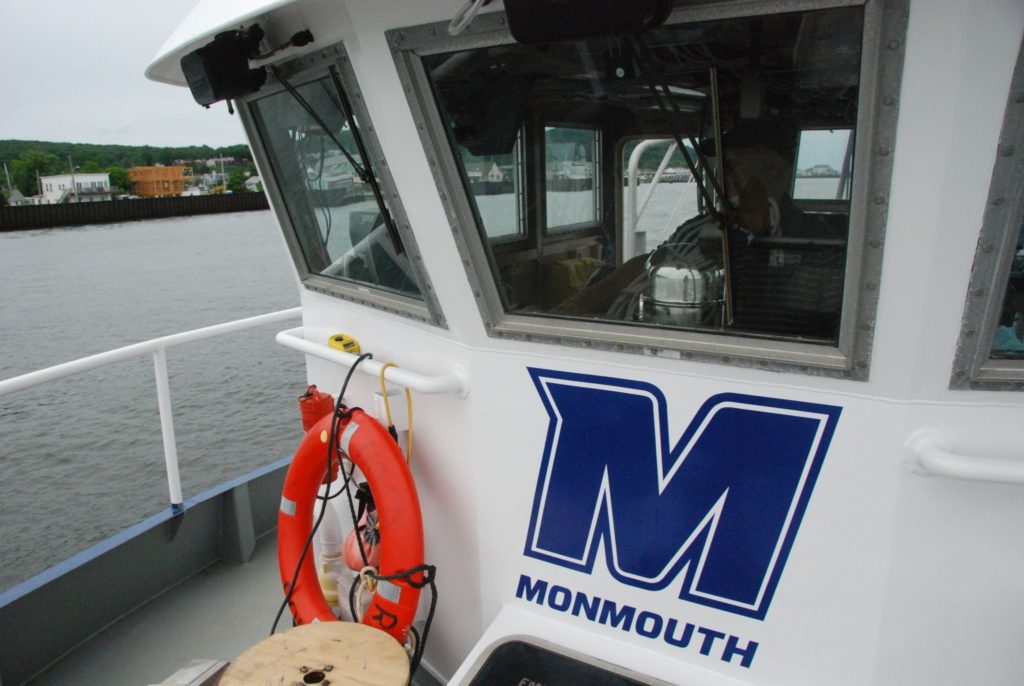 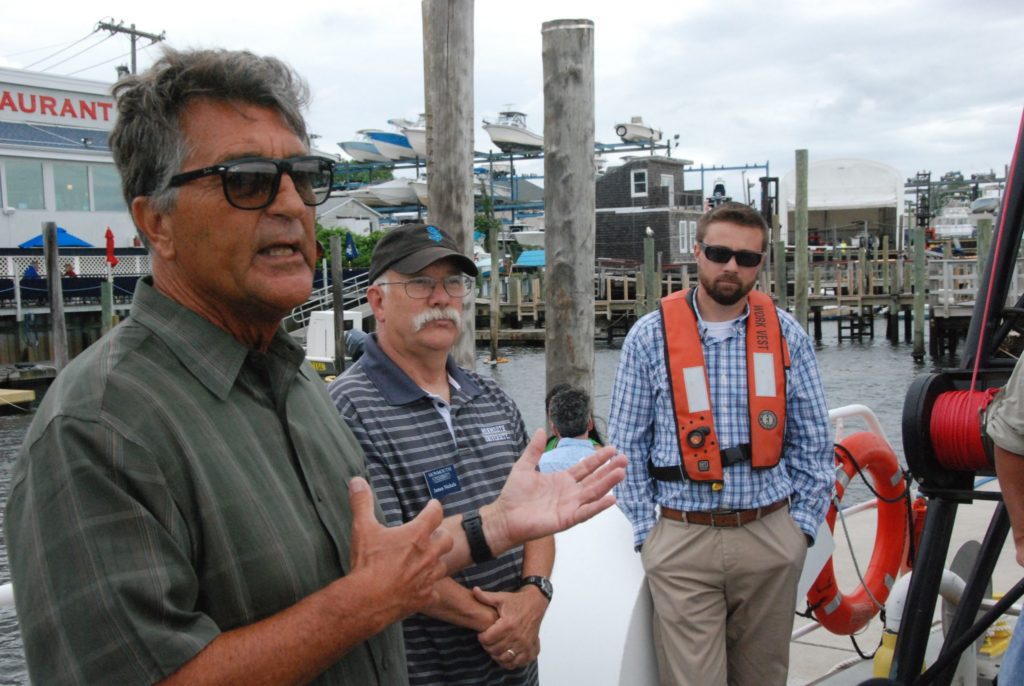 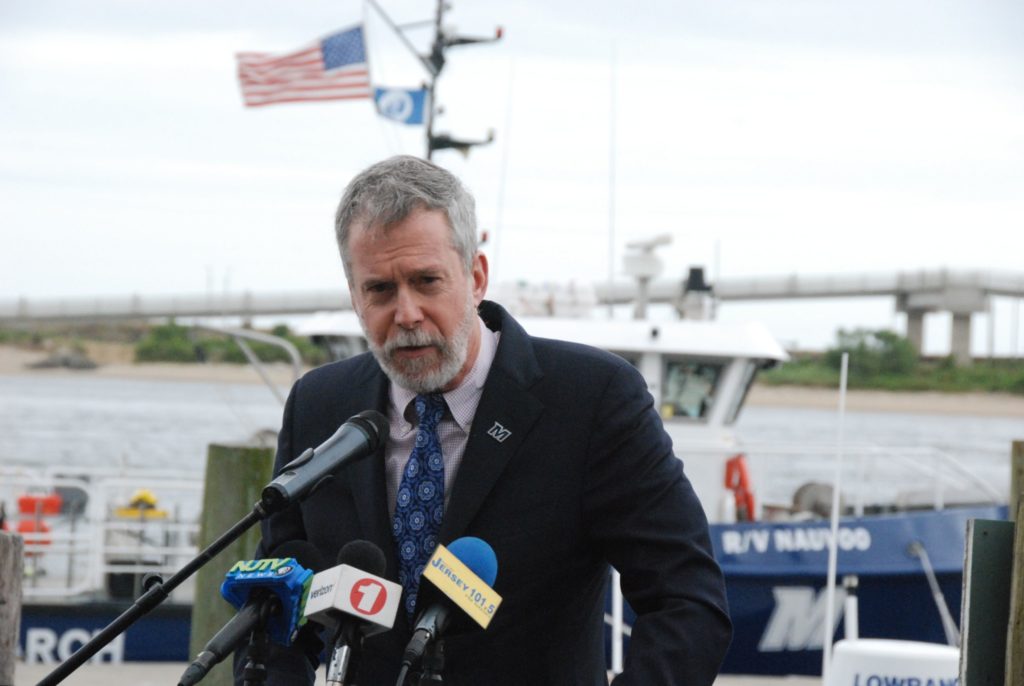 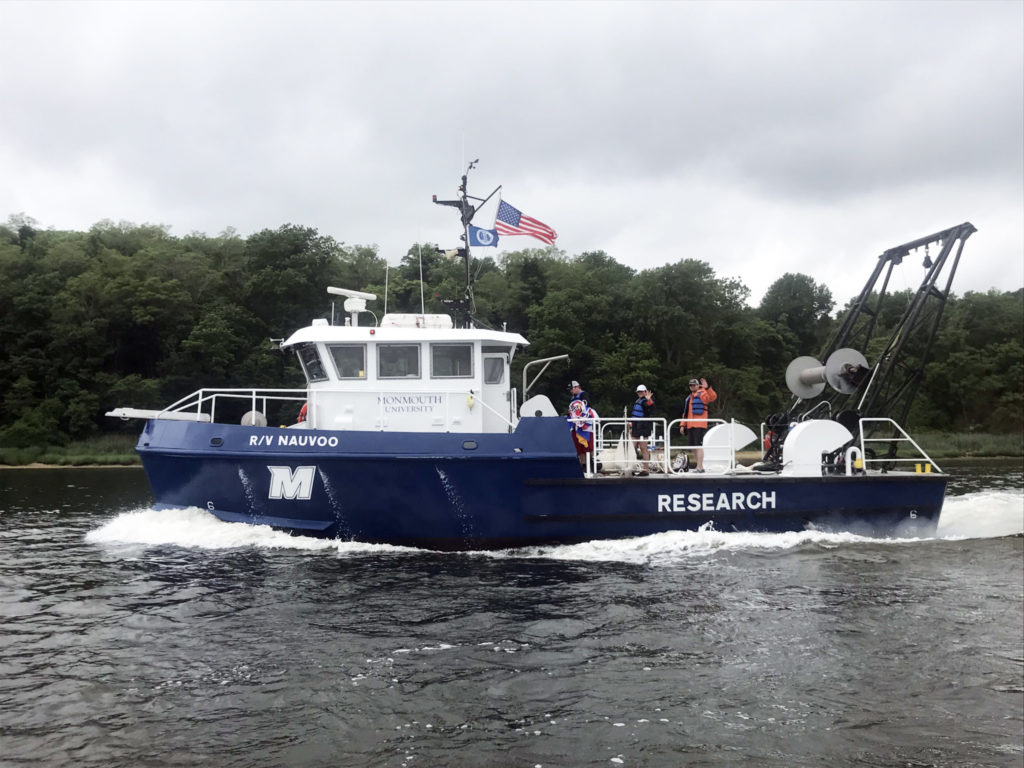 The Nauvoo in 2018, after a refit at Yank Marine. Monmouth University photo. 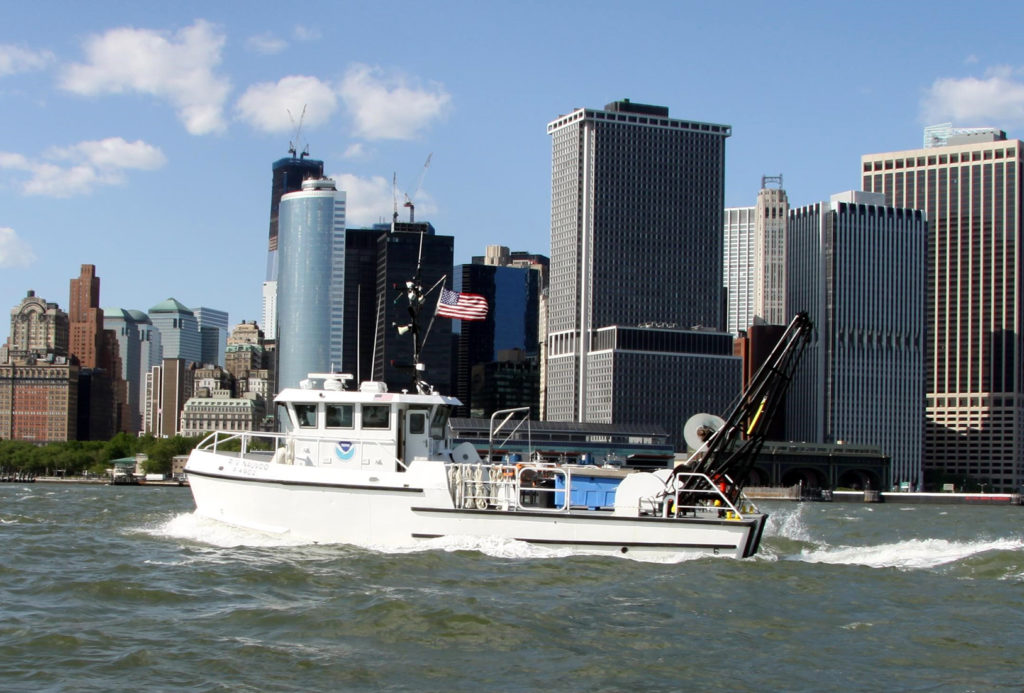 The research vessel Nauvoo in the colors she wore during service with the National Oceanic and Atmospheric Administration. NOAA photo. 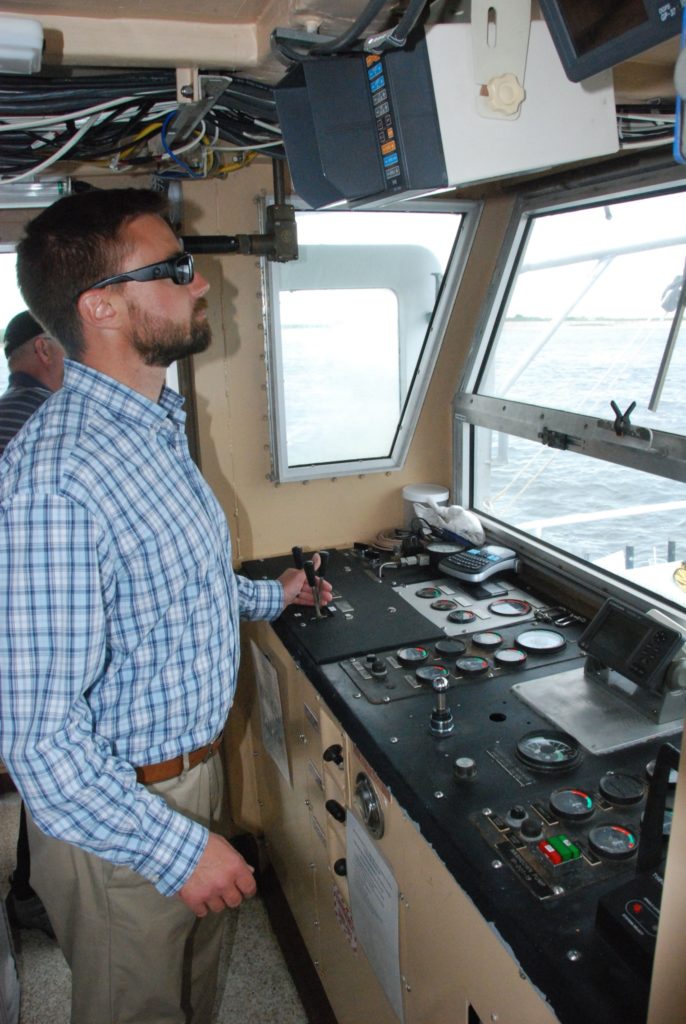 Peter Plantamura, who was captain of the Nauvoo during her time in NOAA service, operates the winch controls. Kirk Moore photo.