During the third quarter, inspections of grain (wheat, corn, and soybeans) for export from all U.S. ports reached 25.8 million metric tons (mmt), down 18% from the same time last year and 7% below the five-year average, the U.S. Department of Agriculture reported today. 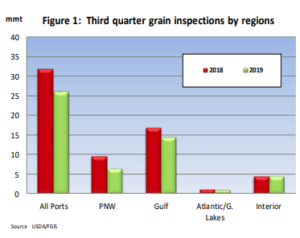 U.S. Gulf grain inspections decreased despite increased soybean and wheat inspections. Third-quarter grain inspections in the U.S. Gulf were 14.2 mmt, down 15% from last year and 7% below the five-year average. The U.S. Gulf’s share (55%) of total grain exports were above last year, but other regional shares were mostly down. Third-quarter rail deliveries of grain to the U.S. Gulf ports jumped 72% from last year, in part because of diverted traffic from the Mississippi River — a 17% drop in barge movements of grain through the Mississippi River locks was caused by navigational delays due to high water conditions. 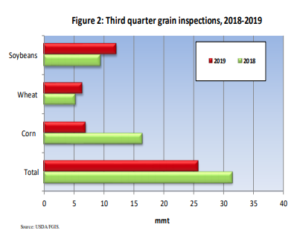 Grain inspections down from previous week