Damage from abandoned and derelict vessels

During National Safe Boating Week (May 18-24), NOAA’s Office of Response and Restoration took a closer look at the anatomy of abandoned and derelict vessels.

An abandoned or derelict vessel (ADV) can be a pollution risk, and depending on the size of the vessel, could result in a pretty massive spill of oil, chemicals, or other hazardous materials. But even without a spill, the vessel itself can damage the environment.

The type of damage ranges from physical impacts caused by the direct impact of the vessel itself, to possible chemical exposures from items in the vessel, such as oils and fuel, and on the vessel, such as hull paint. While still in motion, the vessel can scrape, break, and scour as the hull grinds on the bottom of the sea floor. It can also cause shading if the vessel sits in the same position for too long.

“In Cow Key Channel in Key West, Florida, it was a popular spot for ‘derelict’ vessels that folks were using for affordable housing,” said Kevin Kirsch, Southeast branch manager for OR&R’s Assessment and Restoration Division. “As these structures rotated around their mooring, the vessel, and the rigging would scour and shade the bottom. In the early 2000s the state finally moved everybody out and the area appears to have recovered from Google Earth imagery.”

After assessing the damage from an abandoned or derelict vessel, the next step, before starting restoration, is often removal. But for many vessels, if the environmental impact is minimal or if removal would do additional harm, the decision is made to leave the vessel where it is. The U.S. Coast Guard evaluates the vessel based on whether or not it is a hazard to navigation and the likelihood of an oil or chemical release to determine if removal is necessary. Sometimes, if there is a pollution threat present, responders can also opt to leave the vessel and simply remove the oil or chemical.

Some large vessels that were sunk or grounded during a war or some other major historical event may even serve as a memorial or a national historic landmark. Such was the case with the Two Brothers shipwreck, located on a reef off French Frigate Shoals, hundreds of miles northwest of Honolulu. Two Brothers was captained by George Pollard Jr., whose previous Nantucket whaling vessel, Essex, was rammed and sunk by a whale in the South Pacific, inspiring Herman Melville’s famous book, “Moby-Dick.” The ship was discovered in 2008, and later added to the National Register of Historic Places.

As with the Two Brothers wreck, there may be many other undiscovered ADVs and other sunken vessels. The ocean is a vast place. That’s why, Kirsch says, the frequency of ADVs, can be challenging to quantify.

“When does it become ‘abandoned’ or ‘derelict’,” he said. “In some cases, the boats have been there for so long, people don’t even recall when they showed up.”

Smaller boats are typically abandoned more than larger vessels — often by people who don’t want to pay for disposal. But the data on the number of ADVs or grounded vessels is incomplete, as there is no requirement for salvors to report these types of incidents, with the exception of incidents that occur within a national marine sanctuary.

Submerged aquatic vegetation, oyster reefs, corals, marsh, and mangrove habitats are the most sensitive to impacts from abandoned and derelict vessels. When one of these habitats becomes damaged, restoration is often required.

“It depends on the habitat and the level of impact. For seagrass, you need to return the bottom to grade to lessen additional erosion and allow the grass a substrate to grow across,” Kirsch said. “For corals, the first priority is salvaging dislodged corals, stabilizing them from future damage, until you can get them cemented back in place. If the grounding is really bad and the topography has been altered, then we have to go back in and restore the rigosity. That could mean bringing in limestone boulders or reef modules.” 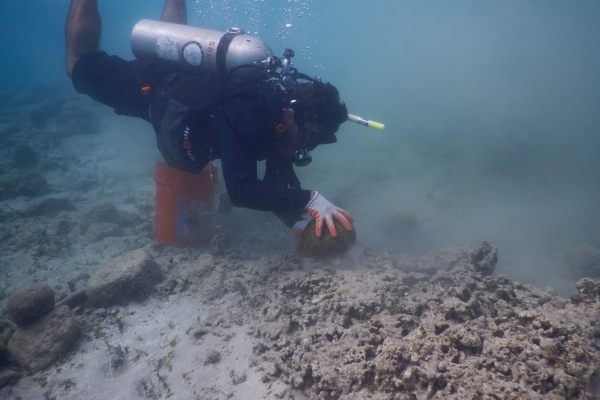 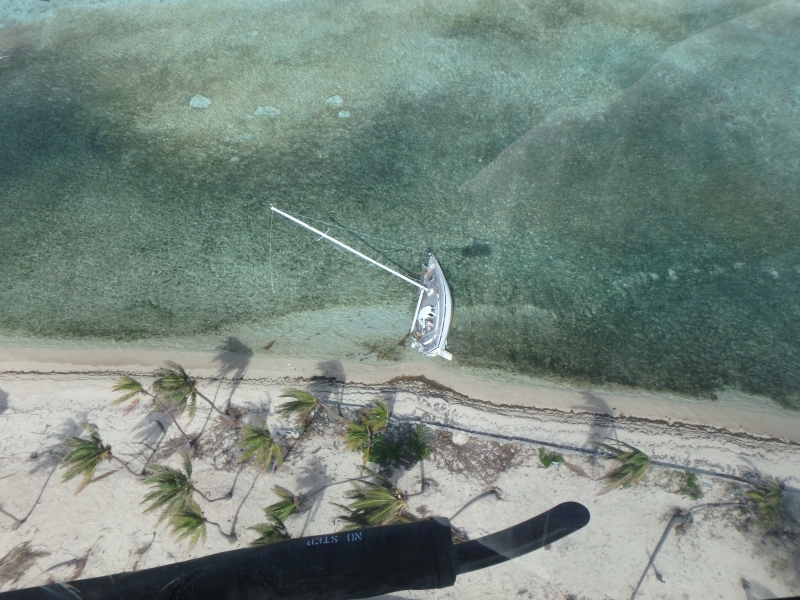 A vessel aground on Long Reef northwest of Christiansted, St. Croix after Hurricane Maria.

Storm-related incidents are also a major source of ADVs that require significant restoration efforts. In the recent 2017 hurricane season, hurricanes Irma and Maria left hundreds of derelict vessels throughout Puerto Rico and the U.S. Virgin Islands.

In these island environments, hurricanes and the debris they cause can be a major threat to important habitats such as mangroves.

“I think it is important for people to be aware that vessels left in the environment are not only an eyesore, but can continue to damage the environment for very long periods of time,” said Lieutenant (junior grade) Matthew Bissell, OR&R regional response officer. Bissell was part of the 2017 hurricane response.

“For example, an abandoned vessel in mangroves may move around and crush the surrounding vegetation during future storms. These mangroves are the first line of defense in preventing beach erosion, and their preservation is directly related to the preservation of our beaches, and eventually, our coastal towns and homes,” he said. “The local corals and seagrass communities also play very important roles in the coastal ecosystem. Derelict vessels, if not removed, can also cause prolonged damage to these resources.”

Learn more about the problem of abandoned and derelict vessels and how OR&R works to solve and prevent the issue by reading the archived blog, “How Do You Solve a Problem Like Abandoned Vessels.”