Barge operators are still moving cargo during the pandemic

The 2020 outlook for the towboat industry is uncertain at best. The economy and river conditions remain a big question mark. Nevertheless, operators have been keeping the supply chain moving throughout the coronavirus pandemic, and several companies have been expanding their fleets.

“It’s definitely a mixed picture,” said Jennifer A. Carpenter, president and CEO of the American Waterways Operators (AWO), “but I like to start with the good news. The industry has been highly successful in keeping Covid-19 in check.”

Companies have set strict cleaning and safety standards, crews have been diligent, and there have been few cases of Covid-19 on towboats.

“The biggest thing,” said Austin Golding, president of Golding Barge Line, “is to keep everyone healthy so we can keep products moving.”

The Vicksburg, Miss.-based tank barge operator moves refined petroleum products, petrochemicals, chemical products and crude oil with a fleet of 64 30,000-bbl. tank barges and 26 towboats. While business has decreased due to economic conditions, Golding said the boats were working, with some barges carrying essential chemicals and cleaning supplies. As of late May, the company reported no positive cases of Covid-19. 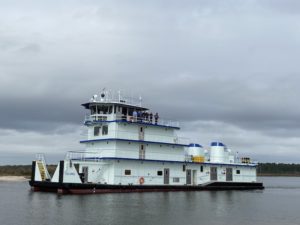 “As opposed our landside counterparts, the entire maritime industry has done an amazing job keeping workers safe,” said Ed Grimm, president and CEO of Southern Towing Company. The Memphis, Tenn.-based company operates a fleet of 27 towboats, ranging from 1,800 hp to 4,200 hp, and 75 barges that transport fertilizer, chemicals, petroleum and other products. The company’s extensive crew screening and boat sanitizing has kept Covid cases to a minimum, with two positive cases among 300 crewmembers in 80-90 days. “The most important contribution has been the diligence with which crewmembers have followed the CDC guidelines on the boats, but more importantly, on their own time,” he said.

AWO’s Carpenter and vessel operators both acknowledge that there is a business slowdown. “There are definitely economic challenges on both the demand and the expense side,” Carpenter said. “But there has not been the dramatic switch off the cruise industry has experienced. It’s been more like a dimmer switch.”

The demand for petroleum products is down, she explained, and auto plant shut downs have dampened the market for steel, but chemicals have been moving and agriculture is a bright spot, with corn and soybeans trading and fertilizer in demand. “We are seeing orders from China and that’s a good thing,” she said.

“Considering the national upheaval, I’d say things are going pretty well for us, as they are for a lot of the liquid carriers,” said Grimm. “We have seen some downturn, but not dramatic.”

Operators, of course, are monitoring river conditions. “Twenty-nineteen was probably the most difficult navigation season in my 40 years in the industry,” Grimm said.

There are difficulties this year, but not as bad as 2019 when flooding and high water lasted 292 days from spring though mid-August. High water on the Arkansas, Upper Mississippi and Illinois rivers, and parts of the Ohio River, have made things challenging, but conditions have not delayed operations, Grimm added.

“High water is constantly a concern,” said Jeff Brumfield, senior director of vessel engineering and construction for Florida Marine Transporters (FMT), Mandeville, La. “There is what we call a good river when everything is just right, and then there is the other. There has not been a good river in the last three years. Things have been either low or high or riding fast. Right now, the water is a little high.”

Nevertheless, even with the high water and Covid-19, FMT has been on a shipbuilding mission. The company hauls chemicals, petrochemicals, agricultural liquids and dry cargo throughout the inland water system, on a fleet that includes 297 tank barges, 50 open hopper barges and 22 deck barges, according to the company’s website.

More boats are on the horizon. “We currently have 12 boats under construction,” Brumfield said, nine at Steiner, two at Metal Craft and one at FMT’s own shipyard. The new towboats will range in size from 76' to 120', and from 2,000 hp to 4,000 hp. All will be Subchapter M compliant with Tier 3 diesel engines and conventional propellers. FMT, Brumfield said, has been selling some older vessels and upgrading with a focus on safety and regulatory compliance.

Steiner has been the go-to shipyard for Southern Towing since 2007, when the barge operator ordered the first Z-drive towboat on the inland waterways. The ninth, the 120'×34'×10'6", 3,200-hp Colonel, was delivered in December 2019. Steiner is currently building another 120' Z-drive for Southern, which is slated for delivery in December 2020. Both are Subchapter M and Tier 3 compliant.

Southern was the first to use Z-drive towboats on inland waters, and it remains one of a handful of companies that operate them. “Compared to conventionals there are few Z-drives, but Marquette, ACBL and SCF have them,” Grimm said. “I think Z-drives are safer and more efficient in the right application.”

He noted that there are places where conventional towboats work better, and places where Z-drives are better. Grimm said the reasons were complex and declined to go into detail. His company operates both types but is only building Z-drives at present. “Steiner does a remarkable job,” he said.

Work at Steiner is progressing well, but at a somewhat slower than normal pace due to the pandemic, according to company president Tara Steiner Marshall. Some venders closed down for a time, and there has been absenteeism at the shipyard. “We have not had anyone test positive for Covid so far,” Marshall said. “However, we have had reason to quarantine a few due to exposure. We are asking employees not to come to work if they have any illnesses.” Customers, she said, have been understanding.

Southern’s Grimm is taking it day-by-day. “I don’t make predictions,” he said, “but I am an optimist, a glass half-full kind of guy. You do your best every day. You do what you believe is right. You go to bed with a clear mind and you wake up excited. What is so great about our marine industry is that every day is different. You have to wake up and give it your all and take what you have learned and do it again.”

Other recent towboat deliveries include:

The inland waterways continue to work and deal with Covid-19