You’re never more than about 80 miles from the sea on the island nation of New Zealand, whose boatbuilding legacy has spawned a new generation of technological advances. Think amphibious boats; coatings to improve speed and fuel efficiency; boats that handle like a four-wheel drive; and systems to keep people and property safe. Kiwi companies such as Sealegs, HamiltonJet, Oceanmax, Naiad and Vesper are gaining a worldwide following by delivering products that make commercial boats better, stronger and faster.

Clint Jones, President of International Sales of Propspeed, says the company was the first to create a product solving a fresh and saltwater problem – slime and shells on propellers. Jones says it doesn’t poison marine organisms – it sheds them. “It’s slick, and therefore marine growth struggles to hang on and grow on it.” The company exports Propspeed to 30 countries around the world and has grown from two employees five years ago to 20 today. Five staff members are based in the U.S. The company unveiled its latest offering: Lightspeed, the first aftermarket coating for underwater lights. Jones says up to sixty percent of permanently-moored boats in areas of Florida use Propspeed. The product is making waves in the commercial marine industry, too, on tug boats, ferries and pilot boats. “We realized our product is clean, but it also lowers fuel burn and lowers operating costs,” says Jones. Operators also want to protect the planet, Jones says. “If we could save three to four to five per cent on fuel on boat consumption around the world, that would also be a significant impact on the environment.”

Vesper Marine creates innovative asset protection systems incorporating “virtual beacons”’ combined with proactive protection to prevent marine incidents. The system can be used to guide ships away from hidden hazards, guard underwater assets from anchor strikes, help in search-and-rescue operations and protect sea life. Vesper’s Guardian system has been used during the America’s Cup races and has also been installed in New York’s Long Island Sound to prevent anchor damage to power cables serving millions of people. Guardian is also used on pipelines in Lake Michigan and in the Mississippi River area. 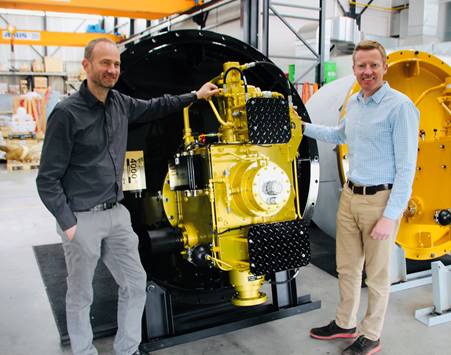 Naiad is one of New Zealand’s leading boating brands, with expertise in custom design and manufacture of large commercial rigid hull inflatable boats (RHIBs). Naiad partners with a U.S. boat manufacturer (Armstrong) near Seattle. The company built ten patrol boats for the U.S. Department of Justice for operation in Indonesia and the Philippines. More recently, Armstrong supplied two eleven-meter, Naiad-designed tourist boats for a whale-watching tour provider north of Seattle. Naiad director John Cowan says having an American boat building partner is essential from a regulatory standpoint, and benefits clients, too. “Commercial customers want to see and touch the boat during construction,” says Cowan. “They want some input into how it gets finished.”

Clint Jones from Propspeed says American “boaties” perk up when they hear a Kiwi accent, knowing New Zealand’s reputation for excellence in the America’s Cup and in the commercial sector, too. “We’re very straight up, uncomplicated and we do what we say and we always deliver,” Jones says.

Industry leaders working together to provide the best protection against fouling and corrosion.

Using technology to save lives