BAE Systems is hoping to create a "quiet revolution" that will transform the maritime industry with clean energy production and propulsion.

BAE's HybriGen system, an all-in-one system, gives vessels the ability to cut down on their greenhouse gas emissions and enables companies to cut their fuel and operating costs.

Joe Hudspeth, director of business development at BAE Systems, not only understands how beneficial the system is for the commercial marine industry, he was actually a customer once.

While with boatbuilder All American Marine in Washington state, Hudspeth was a customer of BAE’s HybriGen system for the vessel Enhydra, built for the Red and White Fleet at AAM. "As a past customer, I was pleased to work with BAE Systems because of the proven reliability of the system," he said.

“For the industry as a whole, we need to be looking for more sustainable systems,” Hudspeth said. “Hybrid and electric is the future.”

BAE Systems has been around for 20 years and has provided hybrid and electric options for transit bus systems and other industries. Over those 20 years, BAE's technology has been implemented in more than 13,000 different systems.

While hybrid and electric systems are not new to other transportation industries, it was new to the maritime industry.

“Our system made sense for maritime applications,” Hudspeth said. “The transit bus system and maritime systems operate in similar environments.”

Hudspeth said bringing BAE's technology to the maritime industry was just the logical next step.

One of the key aspects of the HybriGen power and propulsion system is its modularity. It is a completely sealed and multifaceted system, controlled by computers. Modularity is especially important for maritime applications because engine rooms are often small, cramped spaces that lack room for extras.

Hudspeth said their propulsion motors are ‘huggable,’ meaning it all fits within a 2'x2'x2' area. 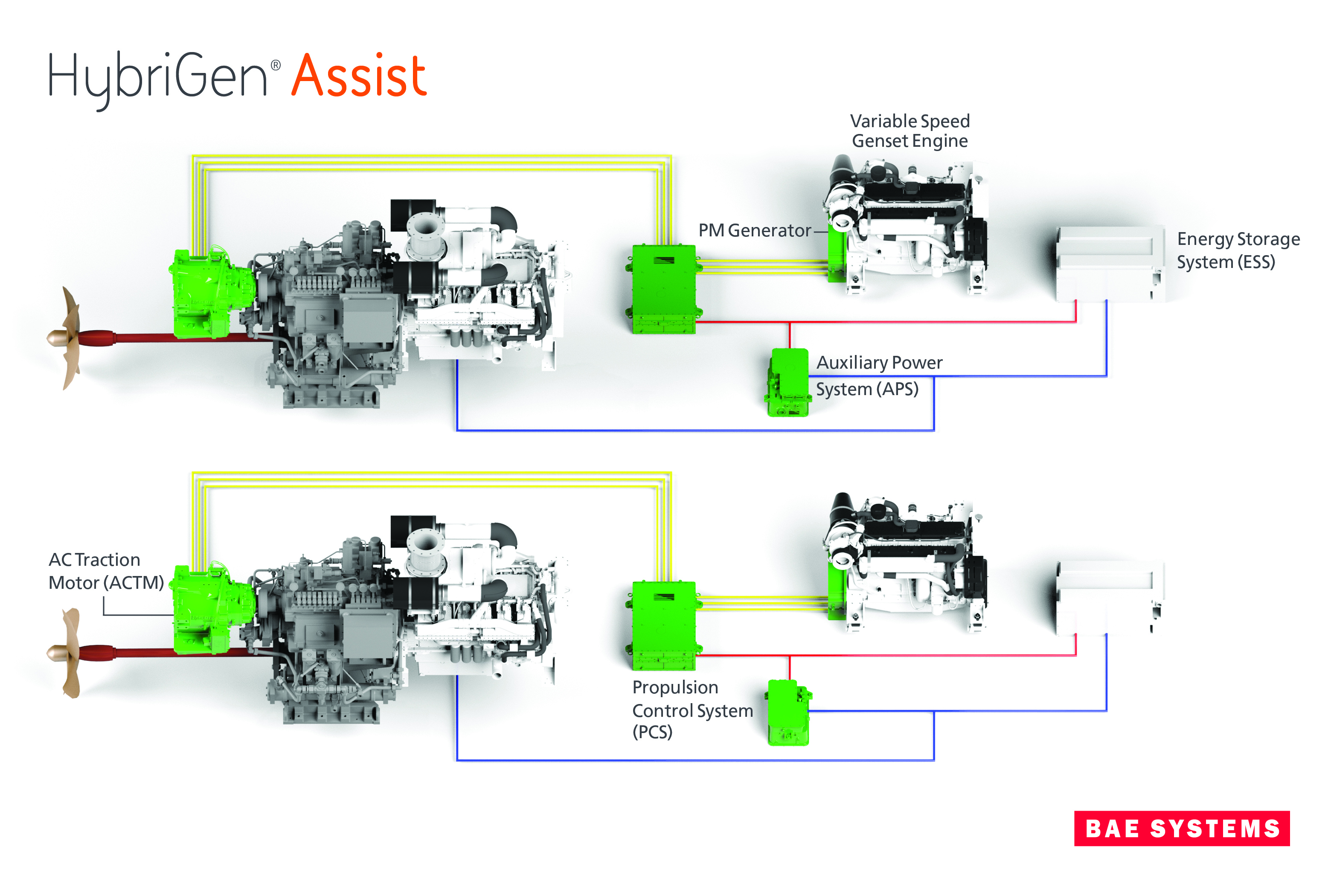 “The HybriGen system is a one-stop shop for propulsion, electronics and energy storage,” Hudspeth said. “All our components are compact and lightweight because you need flexibility to move things around inside the engine room.”

The transition to HybriGen’s electric energy propulsion is not a strict jump from diesel or other fuel. The system can be implemented in steps, tailored to the needs of each vessel. BAE works with the ship to gradually transform the propulsion system. Ships can start with battery storage and then move to a hybrid system, then to a fully electric system over time.

Their system can also be tied into existing diesel generators for low electric access at docking stations or for high power needs. The HybriGen system also has geofencing capabilities, allowing vessels to create their own eco-friendly zones. While moving through those zones, the vessel transitions to fully electric energy production and propulsion, reducing their carbon footprint.

The HybriGen system comes with one small quirk. For years, captains operated their diesel-powered vessels and have come to understand the different sounds and vibrations caused by them.

This quirk isn’t unique to hybrid and electric maritime propulsion systems. The transition to hybrid or fully electric systems in automobiles have brought up similar conversations about how necessary sound production is for safely operating the vehicles.

HybriGen is considerably quieter and produces less vibration compared to its diesel counterparts, which means the physical feedback indicators that captains rely on aren’t there anymore. BAE found an appropriate solution for captains: a complete visual display that will help captains see all the important information they need to safely operate their vessel.

“We want shipbuilders to be comfortable with our system,” Hudspeth said. “We want them to have confidence and all the necessary information they need during the installation.”

And making sure captains have confidence in the HybriGen system is also important. HybriGen's visual display and fully automatic system will help captains better understand how it works so they can operate it right away.

BAE has been installing HybriGen systems in ferries, tugs, pilot boats and other vessels, including research vessels like the one being built at Derecktor Shipyards for the University of Vermont’s Rubenstein School of Environmental and Natural Resources, tug boats, and pilot boats.

The future of vessel design: Electric and hybrid propulsion options