From coast to coast, passenger vessel operators have shut down or dramatically curbed operations and laid people off because of coronavirus. Some give hoped-for restart dates, others say the suspensions are indefinite.

The Passenger Vessel Association (PVA) has asked President Trump to include operators in any economic relief plans, pointing out their members employ thousands of U.S. citizens and face weeks of little or no revenue.

“This is going to be catastrophic” for the industry, said Capt. Dave Anderson, general manager of Fire Island Ferries, Bay Shore, N.Y., which is still operating.

“The impact’s going to be tremendous,” said Capt. Bob Bijur, of Island Queen Cruises & Tours, Miami, which has canceled sailings until further notice because of city and state directives. “We’re going to pull together our reserves to do the best we can for our employees.”

In the weeks to come more and more states will be taking action, said Bijur, who’s also vice president of the PVA board.

“The order included a requirement for ‘non-essential’ businesses to close. We ceased operations in line with the requirements on Monday,” said Tyler Foster, executive vice president and CFO of the Red and White Fleet, San Francisco. “Our first priority right now is our staff, and we have instituted a furlough program, maintaining current benefit levels at this time.” 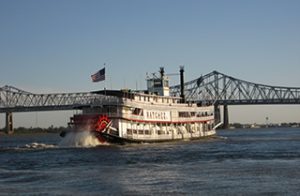 In New Orleans, the steamboat Natchez, operated by the New Orleans Steamboat Co., has cancelled all dinner and sightseeing cruises until at least April 13, citing a declaration by Louisiana Gov. John Bel Edwards about the possibility of a shelter-in-place order in some cities. “It is determined to be in the best interest of our guests and our employees,” the company said on its site.

Hornblower Cruises and Events, a major operator on the West Coast, in the Northeast and Chicago, has suspended operations in most of its markets. “This storm is different than others we've weathered,” a spokeswoman said. “Right now, we are fully focused on getting through the coming weeks, and helping our suppliers, industry friends, and employees get back to serving our customers as soon as possible.”

Hornblower, which normally employs “up to 4,300 full time and seasonal crewmembers across our operations,” has temporarily furloughed all but essential full-time crewmembers, leaving fewer than 250, she said. The company has “eliminated all discretionary spending, substantially reduced marketing and administrative budgets. Our executives have taken significant pay reductions and our chairman/CEO and vice chairman are taking no salary during this period.”

They are reassured “to see strong volume of inquiries and booking requests for May and beyond, and much of our near-term business has rescheduled rather than cancelling,” the spokeswoman said.

Many companies have posted notices online about their virus prevention measures, beefed up shipboard sanitation procedures and asked people who do not feel well to stay home.

Fire Island Ferries said crews continue to sanitize vessels and facilities in between trips and throughout the day. Crewmembers have been given latex gloves and passengers who have gloves are encouraged to wear them, Anderson said.

He expects this weekend will see a spike in business from people with second homes on the island fleeing the New York City area. They are also warning people going to the island that water for most communities won’t be turned on until April 15 and some grocery delivery services have ceased operations.

On the plus side, they have enough crew – a bit unusual for this time of year – because students are home from college.

Check out the latest on the coronavirus pandemic and the workboat industry here.