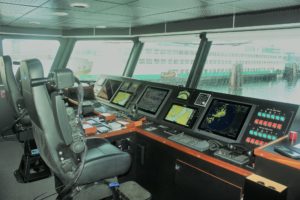 Mackay Marine was selected to be a part of the team to provide marine electronics systems, technologies, and expertise. Mackay Marine photo

Mackay Marine was selected to be a part of the team to provide marine electronics systems, technologies, and expertise.

The bow-loading fast ferries, built by Nichols at its Whidbey Island, Wash., shipyard, are state-of-the-art, low-wake, high-speed vessels. The Enetai was delivered in September. Its sister vessel, Commander, is slated for delivery in March 2021.

The catamarans were designed by BMT to optimize loading and unloading of passengers as well as in-route time. The vessels can load passengers and bikes through a two-station loading area on the sides, or alternatively through divided passenger/bike lanes from the bow. The ferries will have a maximum speed of 37 knots and cruise speed of 35 knots at full load.

The new boats will be among the first vessels to feature a selective catalytic reduction (SCR) exhaust aftertreatment system powered by two MTU Tier 4 16V400M65L main engines each putting out 3,435 hp at 1,800 rpm, through ZF 9050 gears, turning Kamewa S71-4 waterjets, reaching 35 knots at full load. Additionally, an active ride control is being installed, supplied by Naiad; the interceptor system is designed to ensure a smooth, comfortable ride.

Multiple vessel identification and camera systems are designed to ensure enhanced security and safety, particularly critical in heavily trafficked waterways. Systems onboard include:

Both catamarans are outfitted with productivity and safety-enhanced electronics enabling Kitsap Transit to efficiently expand its routes within the Puget Sound region, Mackay officials said.