Northstar Marine Inc., Clermont, N.J., has added two offshore supply vessels to its fleet — the 240′ Commander and the 185′ Independence. The addition of the OSVs enables Northstar to further support long-duration projects in the offshore waters of the U.S. East Coast, the Bahamas and Caribbean, the company said.

Both vessels can accommodate a wide variety of services. The Commander carries deck cargo of up to 1,300 tons and the Independence carries up to 400 tons. Both vessels are equipped with DP-2 dynamic positioning systems for precise stationkeeping in high winds and strong seas. This capability is critical to many scientific, construction and salvage projects. Northstar is the only marine services company in the Northeast region of the U.S. to offer DP-2-equipped vessels and an OSV as large as the Commander, company officials said. 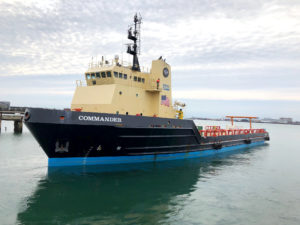 The Commander was added due to its size, sea worthiness, and number of overnight accommodations for clients and project personnel. Northstar Marine photo

The 185’x34’x14′ Independence was added because of its versatility as a fast crew and supply vessel, as well as its shallow draft — 12.3′ maximum.

Both vessels are able to performing the extensive geophysical and geotechnical work that is essential to the construction of the numerous proposed offshore wind farms in the Northeast U.S.

“The addition of the Commander and the Independence makes Northstar a more multifaceted marine services company and expands our offerings to our clients that demand a high level of capability and reliability,” president and CEO, Phil Risko, said in a prepared statement.