“Reopening the Port of Brunswick to around-the-clock transit means greater flexibility for the shipping lines that call on Brunswick, and more timely service for auto manufacturers and other cargo owners,” said GPA Executive Director Griff Lynch. “We want to thank the Coast Guard, the Brunswick Pilots and all of our partners who have worked tirelessly to bring us to this point.”

The channel will be open to one way traffic as inbound and outbound commercial vessels will have to pass one at a time for the safety of response crews working to prepare the Golden Ray for removal.

“We appreciate the continuing partnership with the Georgia Ports Authority, Brunswick Port and Moran Towing,” said Commander Norm Witt, Federal On Scene Coordinator. “While removing the Golden Ray will take time, minimizing the impact of this incident on the community and protecting the environment are priorities for the Unified Command.” 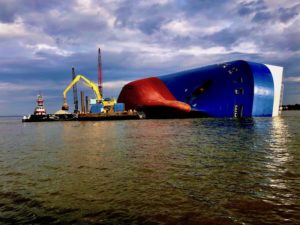 A knuckle boom excavator picks up 1-to-3-inch rock-aggregate from a container barge in St. Simons Sound, Georgia, Oct. 29, 2019. The excavator guided by sonar and GPS, strategically places the rock next to the hull of the M/V Golden Ray to slow erosion. Coast Guard photo

On Oct. 12, the UC completed the lightering of the forward fuel oil tanks onboard the Golden Ray. More than  225,000 gals. of fuel had been removed as of Oct. 12. Lightering of the remaining fuel and lubricant tanks continues.

Maritime experts engaged in the response have determined that it is not possible to safely right and refloat the vessel in a fully intact condition. Consequently, UC is developing plans to remove all of the Golden Ray’s hull, components, and cargo by disassembling the vessel in place. This remains a complex situation but additional information about the removal plan and the expected timeline will be shared with the public as and when available.

UC response crews began strategically placing rocks next to the hull of the Golden Ray to slow down erosion around the vessel on Oct. 28. 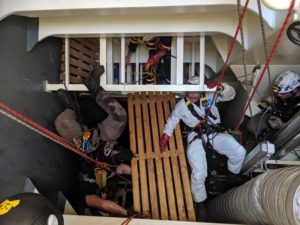 Strong area tidal currents in the sound have been causing erosion and transporting sediment. Once the vessel is completely dismantled and transferred out of the sound, the rocks will be removed using excavators with sieve buckets.

Trucks are delivering approximately 6,000 tons of rock from several rock quarries located within the state of Georgia. The rock is being transported by barge and placed on the seafloor using knuckle boom excavators and GPS for accuracy. Sonar technology will be used to guide the placement of the 1″-to-3″ aggregate rocks next to the hull of the vessel in real time.

The Army Corps of Engineers and the Georgia Department of Natural Resources have reviewed and approved the operation while engineers work to finalize a vessel removal plan.

“We appreciate everyone’s patience as plans are developed to remove the ship and its cargo from the waterway,” said Witt, Coast Guard commander for the Unified Command. “Response crews are working seven days a week, weather permitting, to prepare the motor vessel Golden Ray for removal.”

Representatives from the Coast Guard, the state of Georgia, Gallagher Marine Systems, and other local partners continue to work diligently to ensure the safety of its responders and the surrounding community.

The Golden Ray caught fire on Sept. 8 after departing the Port of Brunswick, Ga. All crewmembers were rescued. The Golden Ray departed the Brunswick port bound for Baltimore about 1 a.m. Sept. 8 when it suffered a fire on board.

The Golden Ray‘s crew size was 24, made up of 23 crewmembers and one pilot. The 6,933-AEU (automobile equivalent units) Golden Ray was built in 2017 and is owned by Hyundai Glovis.

The cause of the incident is under investigation.