The largest containership to call at U.S. East Coast ports began its tour in New York Harbor, transiting under the raised Bayonne Bridge that accounts for some of the billions of dollars in port improvements to accommodate the new generation of ultra-large container vessels.

The 2020 Malta-flagged newbuild is one of the latest in the CMA CGM giant’s ULCV fleet, coming three years after the company’s 14,000-TEU ships began calling at U.S. ports. 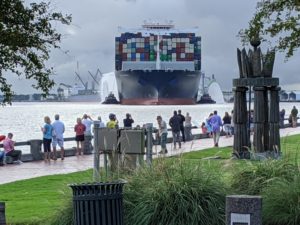 In September 2017 the CMA CGM Theodore Roosevelt was the first to pass under the Bayonne Bridge, after the Port Authority of New York/New Jersey spent $1.7 billion to raise the bridge deck from 151’ to 215’ above the Kill Van Kull channel.

That culminated more than 20 years of channel deepening and other improvements the authority saw as critical to maintain the port’s premier position. In the Southeast, Charleston and Savannah port officials are likewise pushing forward to accommodate bigger and deeper-draft vessels.