THE MORE THINGS CHANGE, THE MORE THEY STAY THE SAME

A drillship whose main reduction gears (MRGs) were designed and manufactured by Philadelphia Gear will soon have 50 years of successful operation in its rearview mirror. Okay, maybe ships don’t have rear views in the typical sense, but we’ll be marking that vessel’s golden anniversary nonetheless. Completed and launched in 1972 and repurposed for different drilling applications as mining economics have shifted over the decades, the ship has run for more than 47 years with its original gears, shafts, pinions and housings.

In all its time on the water, through all its various duty cycles, and through all its travels in the world’s oceans, the ship had undergone only routine maintenance, including the periodic replacement of normal wear items. The only unplanned outage on record, in fact, happened very recently and was caused by a lubrication failure. Unfortunately, this caused damage to the bearings, shafts and gearing in one of the MRGs, and Philadelphia Gear is presently manufacturing replacement parts to get the ship back underway ASAP.

Once installation of the new parts is complete, we look forward to the next 50 years of successful operation of this drilling ship. They don’t call it a workboat for nothing, and neither do we. At Philadelphia Gear we make every marine gearbox to work as long and as hard as our customers do. 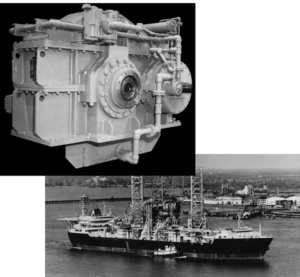 The Model 30 HMGH main reduction gear, first produced in 1966, was designed to be completely self-contained and afford a symmetrical machinery arrangement.

Philadelphia Gear, now part of The Timken Company, has been a leading designer and manufacturer of gearing solutions since its inception in 1892, and has served the workboat market nearly as long.

As a founding member of AGMA (American Gear Manufacturers Association), Philadelphia Gear pioneered many of the state of the art techniques used today in the engineering of marine gear drives.

In fact, by independently certifying each of our six manufacturing facilities to the ISO 9001:2015 standard, and by offering a best-in-industry 5-year warranty on every marine gearbox we build, we prove our commitment every day. 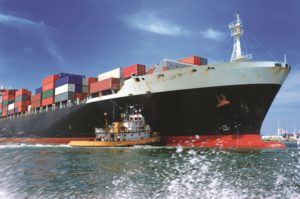 Philadelphia Gear is now part of Timken Power Systems, Philadelphia Gear stands ready to capitalize on our more than 100 years of expertise, providing customers with a complete array of power transmission solutions, including the optimization of our inspect-and-repair regional service and manufacturing centers, strategically located across the United States.