He says his barge line, based in Vicksburg, Miss., is pulling out all the stops to retain its credentialed tankermen who oversee the prepping of the company’s tank barges and the transfer of fuel and liquid cargoes.

In a tight job market, these workers are being lured by companies outside the maritime industry. 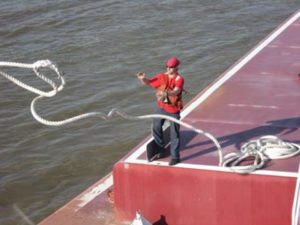 “There’s a real squeeze on those employees external to the maritime industry in construction jobs, the oil field, or anything that requires someone with a little dexterity,” Golding told me during a break in meetings of the Waterways Council Inc. in Washington, D.C., a few weeks ago. His tank barges move refined petroleum, petrochemical and chemical products throughout the inland river system.

“In the wheelhouse, the attrition is more towboat to towboat company, but the tankerman may run to the oil field or to big construction companies, or the pipelines,” he said, adding that the competition realizes the value of their skills by their training, credentials and vessel experience in handling dangerous cargoes.

To encourage them to stay, he said family-owned Golding Barge is increasing wages later this year.

“I’m always cautious and don’t want to sound like we’re begrudgingly having these pay increases, but as long as they are sustainable, that’s a story that builds good will and (shows) that we’re a good-paying industry that has careers, not just jobs,” said Golding, a third generation of Goldings to run the company. He began working on the family’s towboats immediately after graduating from Mississippi State University in 2009.

But he cautioned that “if not managed properly and people aren’t training people, and we’re poaching each other and wages get to a point that they aren’t sustainable, then that will hurt the market.”

Having a “skilled worker bidding war” is actually a good thing for both the employer and employee. “You get people that other people want and people think really well of the people you have,” Golding said. “We’re glad we got that person, and we’ve just got to retain him.”

Knowing that long absences from home during work cycles can be challenging for many, his company tries to be flexible with crew’s time off as well as offering good opportunities for training and advancement in addition to good salaries. He said Golding Barge Line loves increasing wages and helping people advance, which is a core value of its business.

“It is a tighter job market, but there are still people who see this as a great career opportunity, and we’re still the top of the choice list for those who want to walk away from home, not sit at a desk and have a chance at advancement,” he said. “They are still coming through the door.”

Keeping on top of the salary game is just one of the challenges for companies like his.

“Our industry is facing increased regulations, increased wages and more hostile working environment. And that’s tough, with high water and bad weather,” he said, adding that modernizing inland lock and dam infrastructure and understanding the impact of climate change on the rivers are also pressing priorities.