The future of offshore wind energy was a major presence at the 40th annual International WorkBoat Show, a sign of accelerating interest in ocean power from coastal states and the opportunity it could bring to the U.S. maritime sector.

More than a dozen featured expert speakers on offshore wind attracted audiences, including representatives of companies with deep offshore experience in the U.S. oil and gas industry. 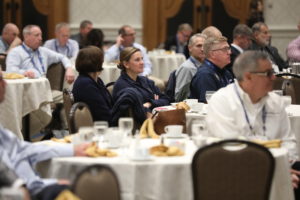 The show included a first-ever networking session for the emerging U.S. offshore wind energy sector. More than 225 guests registered for the morning breakfast session at the Hilton Riverfront hotel in New Orleans, to hear experts update the latest developments.

So far 15 federal lease areas off the East Coast could potentially be developed to 23.6 gigawatts of power potential, exceeding the total 18.6 GW built in Europe since the 1990s, Liz Burdock, president of the Business Network for Offshore Wind, told guests.

“In 2020 we’ll have additional leases coming on line in New York and California. This will become a bicoastal industry." 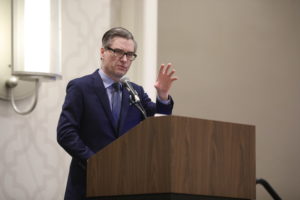 "We estimate we need about 50 crew transfer vessels by 2035," typically 65' to 90', said Folsom. Judging from project proposals to date, around 266 new and repurposed U.S. vessels could be employed over 10 years, he said.

After the prolonged downturn in oil prices, more of the legacy offshore industry is looking to the East Coast as a new growth opportunity. After years of skepticism, industry leaders with groups like the Offshore Marine Service Association and National Ocean Industries Association are publicly saying wind power could be its next big thing.

“Probably 40, 50 years ago with the rise of the Cajun mariners my dad was looking in the Gulf of Mexico and saw a great opportunity when the oil and gas companies said how much they were going to spend,” said Joseph A. Orgeron, business and technology developer for Second Wind Maritime based in Galliano, La.

Orgeron tells wind developers and fellow Gulf business owners alike there is a lot to be applied from the oil and gas business. There is the experience with “distributed vessel infrastructure that doesn’t exist on the East Coast, the 24/7/365 mentality and work safety…the European developers who are coming in to develop offshore wind see that as high value.”

The full-on timeframe for starting East Coast construction has been pushed back – in large part by the efforts of commercial fishing advocates, who urged the National Oceanic and Atmospheric Administration to hold off from endorsing an environmental impact study of the planned Vineyard Wind project off Massachusetts.

That led the U.S. Department of Interior to initiate a further study of cumulative impacts of potential building hundreds of wind turbines on the outer continental shelf, looking at effects on the environment and other maritime uses. The Coast Guard is likewise conducting its own study of port access and marine traffic issues.

The study has been targeted for delivery around March 2020; meanwhile the Coast Guard is completing its own assessment of how to plan for maritime traffic and safety on a seascape altered by potentially hundreds of turbine towers.

But advocates for the wind industry say the delay may benefit its long-term prospects.

“It’s better that we have this review at this point, than when we have two or three utility-scale projects underway,” said Ross Tyler, a senior developer with wind company RWE Renewables.

That too will give more U.S. companies – including the Gulf of Mexico legacy industries – more time to prepare, Burdock said.