The market for Inventech Marine Solutions patrol boats has been pretty steady. That’s especially true in Florida where “we’ve done a lot in the state and it continues to grow,” said Jenson Charnell, president of the Bremerton, Wash., boatyard.

Popular Inventech aluminum patrol boats are the 31 and 33 full-cabin models. The enclosed cabins offer protection “so it’s a versatile platform that can go throughout the year,” Charnell said. The bow cockpit is fairly easy to access from the cabin, and when a law enforcement officer needs to go ashore, he can beach the boat and take advantage of a folding bow door that “allows you to climb off the front fairly easily. It’s manual, lifting and lowering, and doesn’t require any pulleys or winches.”

Match the full cabin model up with a propulsion option that law enforcement agencies are starting to request from Inventech and you have a very fast patrol boat. That option is power provided by a pair of Mercury Marine V-12 600-hp Verado outboards. “In the next year to year-and-a-half, we’ll see patrol boats completed more and more with Mercury 600-hp V-12 outboards, mostly in pairs,” said Charnell.

Adding the third 600-hp Mercury, which comes in at about 1,300 lbs., has required some modifications to the hull. “The biggest thing we’ve done for longevity is increasing plating thickness because it will be a faster boat,” said Charnell. “And with three heavy outboards on the transom, fuel tanks have been moved to compensate for the added weight.”

Charnell allows that most of the time the 41-footer won’t operate at full speed, but with triple Mercurys, the patrol boat will be capable of cruising at a higher speed, 40 to 45 mph. “What we are trying to design the boat around is cruising in heavy seas at a fairly decent clip.”

In December, Safe Boats International, another Bremerton, Wash., boatbuilder, was working on its 52nd Safe 41 Interceptor for the U.S. Customs and Border Protection. The first Safe 41 Interceptor for CBP was built in 2016, four years after the model was introduced in 2012 for the Royal Bahamas Police Force. Since then, 78 aluminum 41'1"×12' Interceptors have been built, including the one currently under construction. 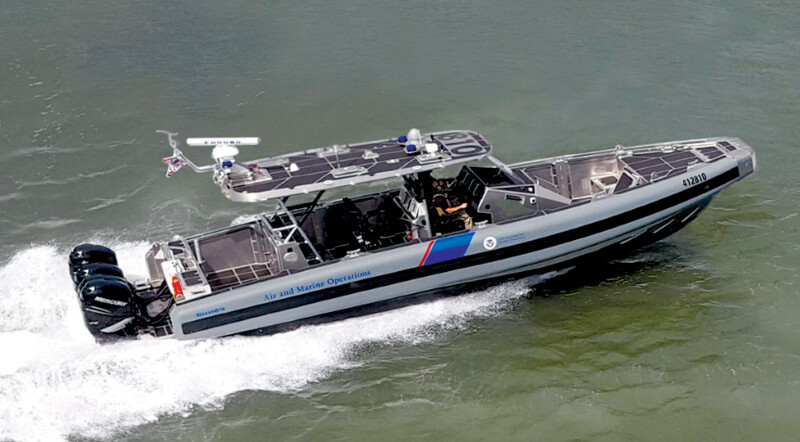 The speed comes from the Mercury outboards lined up across its transom. The early Interceptors started out with four 300-hp outboards. That was eventually stepped up to four 350-hp outboards, or 1,400 hp total, which is what the boat being built for CBP will have. That should give it a top speed of 66 mph.

“It can be configured for 1,600 hp,” or four 400-hp outboards, said Knivila-Ritchie, but that hasn’t happened yet. That should push the speed up to nearly 70 mph.

The Safe 41 Interceptor currently has seating for six with configurable shock track seating in an open cockpit with an aluminum T-top. “It’s very easy for the operator to feel comfortable running at speed and chasing down the bad guys,” said Knivila-Ritchie.

Lake Assault Boats moved into the patrol boat arena a couple of years ago after making a name for itself as a builder of fireboats, and the patrol boat market “continues to be a focus for us,” said Bob Beck, the company’s director of sales and marketing. 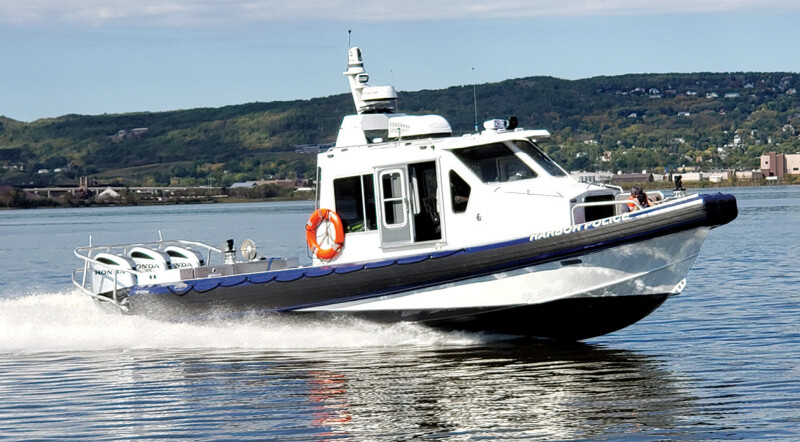 Two models in particular are at the forefront of Lake Assault’s focus — the 33 Patrol Mono Hull for the Navy and the 36 Army Patrol Mono Hull. Both models are currently being built. The Navy has the largest order, for up to 130 boats. In December six had been completed and work had started on the seventh boat. Beck said the project could take up to five years. “The Navy will use them all around the world, in harbors and ports, wherever Navy ships are.”

The 33'×10' Navy boat, which Beck refers to as a force protection medium boat, has a full cuddy cabin with Allsalt Maritime’s Shox shock mitigating seats for a three to four-man crew. A Wing polyurethane foam collar protects the aluminum hull along the sheer line. There are weapon mounts for machine guns up to 50 caliber.

On the transom are a pair of 225-hp outboards that could be “Hondas or Yamahas, whatever they order,” said Beck. He puts the 33 footer’s speed with both outboards wide open at about 35 knots.

Lake Assault Boats is building 10 of the 36'9"×10' Army boats, which Beck describes as a “variation of the Navy boat. It doesn’t have quite as many features as the Navy boat.” But it does carry more horsepower with triple Honda 250-hp outboards, capable of pushing the aluminum 36 footer to 40 knots. There’s also a much more robust polyurethane foam collar

In addition to the boats for the Navy and Army, Beck sees a number of opportunities all over the U.S. That’s not only for patrol boats based on the Army and Navy hulls but Lake Assault’s 24 Patrol RHIB Mono Hull for local law enforcement agencies.

“The patrol boat market is definitely on the up rise,” said Beck.