Austal USA christening the future littoral combat ship Mobile (LCS 26) last week at Austal’s ship manufacturing facility in Mobile, Ala. It is the third Navy ship christened at the shipyard in 2019 and the fifth ship named after the city. Mobile is the 13th of 19 small surface combatants Austal USA has under contract with the Navy.

“It is such an honor for a future littoral combat ship to be named after the city of Mobile,” the ceremony’s principal speaker, U.S. Rep. Bradley Byrne, R-Ala., said. “Our area takes such pride in building these fine ships, just the latest vessel in Mobile’s long history of shipbuilding. I know the spirit and patriotism of Mobile will be encapsulated in this ship.” 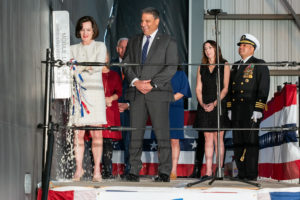 The christening ceremony for the USS Mobile (LCS 26) built by Austal USA in Mobile, Ala., was held on Dec. 7. Austal USA photo

The 421'6"x103.7' Independence-variant LCS is the most recent step in the small surface combatant evolution. A high-speed, agile, shallow draft, focused-mission surface combatant, the LCS is designed to conduct surface warfare, anti-submarine warfare, and mine countermeasures missions in the littoral near-shore region, while also possessing the capability for deep-water operations. With its open-architecture design, the LCS can support modular weapons, sensor systems and a variety of manned and unmanned vehicles.

“This is the 20th ship we have christened over the last five years,” said Austal USA President Craig Perciavalle. “We are blessed to have christened so many ships through the years but this one is special. It is a distinct privilege to build a ship named after your namesake city and this has truly been a community effort.”

In addition to being in full-rate production for the LCS program, Austal USA is also the Navy’s prime contractor for the expeditionary fast transport (EPF) program. Austal has delivered 10 EPFs, with a total of 14 under contract. Austal USA is also leading the evolution of connector and auxiliary ships as Austal EPF designs for dedicated medical, maintenance, logistics, and command and control ships continue to impress fleet commanders.

“Manufacturing complex small surface combatants efficiently at this pace takes an incredible team, and we have one of the best teams in the business here at Austal USA,” said Perciavalle. “With incredible speed, volume, flexibility and firepower, Mobile will be the coolest, most formidable small surface combatant on the planet, one that meets the needs of the Navy of today, while having the adaptability to meet the needs of the Navy of tomorrow, a ship that will represent the best that America has to offer across the globe for decades.”