The offshore community, particularly offshore service vessel operators and drillers in the deepwater Gulf of Mexico, entered 2020 fairly confident that a drilling recovery was in the making, only to be sucker punched early on by a demand-sapping coronavirus pandemic and a global oil price feud. 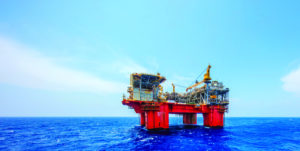 BP's Atlantis North subsea expansion will tie into the existing platform in the Green Canyon area of the deepwater Gulf of Mexico. BP photo

“I felt like I had a pretty good handle on it (2020 activity) three weeks ago, but I just don’t know right now,” Matthew Rigdon, executive vice president and chief operating officer of Houston-based OSV operator Jackson Offshore Operators, said in mid-March. “What I would have told you then is that based on what we saw through the course of 2019, and even at the beginning of this year, activity was increasing in the deepwater.”

Any such projections were moot by March 18 when oil prices for the West Texas Intermediate (WTI) and Brent benchmarks crashed to nearly 18-year lows of $20.06/bbl and $24.52/bbl, respectively, and continued to slide the rest of the month (WTI rebounded a bit and closed at $29 bbl. on April 3). Unlike previous years, the exponential growth in tiebacks and the subsequently shorter time horizon for first oil now makes the deepwater more susceptible to price shocks.

Meanwhile, the marketed utilization rate for the 758 jackups, semisubmersibles and drillships in the worldwide available fleet averaged 85.6% as of March 13, up year-over-year from 79%, according to IHS Markit. The global high 89.6% utilization rate in the North Sea is threatened as much of Europe was on lockdown in March to try and contain the spread of the  coronavirus. Aside from rock-bottom prices, Rystad said the pandemic alone is expected to shave some $5 billion off European oilfield service purchases, threatening the solvency of 20% of the continent’s small to mid-sized service and supply companies.

World oil demand was down 7% in the first quarter, and the drop is expected to double to 14% in the second quarter, according to IHS Markit.

In many cases, prices have spiraled to a level below production costs and government royalties, which could force operators to choke back or completely shut-in production, said Wood Mackenzie. “There is no precedent for the scale of potential shut-ins, if there is a prolonged period of low prices, for today’s asset classes,” Fraser McKay, vice president, upstream, said on March 27.

Most U.S. companies are in a similar boat as operators have cut billions of dollars from their 2020 exploration and production (E&P) budgets, in what has become a tremendously fluid situation. More evidence of the growing emphasis on conserving cash came on March 18 when the latest federal lease sale in the central Gulf of Mexico attracted only $93 million in high bids. Area-wide Lease Sale 254 drew roughly half of the high bids received in last year’s sale and marked the lowest cumulative bid amount in more than four years. 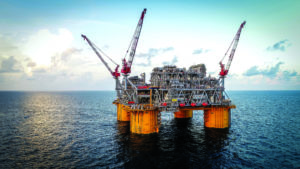 Shell's Appomattox is expected to produce up to 175,000 bpd of oil equivalent in the deepwater Gulf of Mexico. Royal Dutch Shell photo

After producing around 1.9 million bpd of oil in 2019, the Gulf of Mexico was on pace for record production of 2 million bpd this year, according to the U.S. Energy Information Administration (EIA). Shell’s Appomattox FPSO, which initiated production a year ago this month in approximately 7,400’ of water, was one of eight deepwater Gulf of Mexico projects the EIA expected to begin delivering first oil in 2019.

By late March, Shell had slashed $5 billion off its 2020 capital expenditures (capex) that at last count stood at $20 billion.

No less than four deepwater developments were expected to come on line in 2020, including the BP-operated Atlantis North subsea expansion, with tiebacks to the existing platform in Green Canyon. Also, in Green Canyon, fast-track production commenced early this year on the Orlov development operated by Fieldwood Energy, among the independents taking on a larger presence in the deepwater Gulf of Mexico, which was discovered in 2019.

As of March 20, the U.S. Bureau of Safety and Environmental Enforcement (BSEE), the chief federal regulator, had issued 10 new well drilling permits in the Gulf for water depths greater than 4,000 ft, down one from the same period last year. According to Baker Hughes weekly data, 18 rigs were active in the federally controlled waters of the Gulf of Mexico as of April 3, down four rigs from a year ago.

By the end of 2019, most of those rigs, particularly deepwater floaters, were actually poking new holes rather than conducting workovers, completions or otherwise engaged with extending field life and increasing production, said Rigdon. “In early 2019, less than half the contracted rigs, on average, were actually drilling. That began to change by the end of 2019 and virtually all the rigs were doing true drilling, either exploration or development work,” he said.

It remains unclear how the freefall in oil demand and prices, plus the coronavirus pandemic, will specifically affect the once favorable prospects for the largest (300'-plus) platform supply vessels (PSV).

Much of the tightness can be traced to high-end vessels deploying to the latest hot spot, Guyana. There, aside from its proximity, the water and well depths are very similar to those in the deepwater Gulf of Mexico, giving U.S.-flagged PSVs a decided edge, said Rigdon. “There are no vessels in the world that have the liquid mud capacity of U.S.-flagged boats, at 15,000-bbl-plus. Even the largest North Sea standard supply boats have, at most, 8,000 bbl of liquid mud capacity. Wells elsewhere just aren’t as deep and don’t require that much mud,” he said.

Jackson Offshore’s five PSV are all working under renegotiated term contracts in the Gulf of Mexico, partially through 2023. With some drilling rig contracts now going for months rather than years, the situation is far different for offshore supply vessels (OSV) supporting the drilling sector.

“With the economic climate, oil companies are having shorter programs,” said Sanchez. “Before, we’d see rigs contracted for multiple years, and now we’re seeing contracts as low as three, six and nine months. When the market is slack with ample tonnage available, more (OSV) jobs are going to the spot market.”

Tidewater president and chief executive officer Quintin Kneen said production support once accounted for only about half of the work for OSVs, but with the drilling downturn, now it comprises up to 70%. Echoing Sanchez, he said day rates are lifting for select vessels. “In the 300-foot class, 1,000-square-meter deck vessel, I see marked improvement in those vessels,” he told analysts on March 3, “and bidding activity is currently a step higher as well. So that market is a market that I consider are no longer distressed. It’s still a difficult market, but the day rates improvements are progressing.”

New Orleans-based Harvey Gulf International Marine is among those deploying vessels outside their backyard in the Gulf of Mexico and into the international arena. Along with the recent expansion into Guyana, Suriname, Trinidad and Mexico, HGIM planned to send two PSVs and one fast support intervention vessel on speculation to the West Africa and Mediterranean regions in the second quarter. “In the first quarter (2020), we deployed two vessels to Peru, which are currently operating under contract,” said CEO Shane Guidry. “We intend to further expand our footprint in West Africa, and certainly not opposed to going back to East Africa for the right opportunities.”

With the worsening coronavirus crisis, Sanchez was less sanguine in early April. “I’m expecting serious declines in the coming months,” he said. “Things are going to get worse for oil and gas because unrestrained oil production will fill up all of the storage, sinking oil prices to the tens ($10 bbl-$15 bbl). Canada and Brazil have already announced modest cuts in production. It doesn’t matter if the OPEC alliance make giant cuts, all producers will have to cut production or be forced to shut in production when storage fills up. Oil demand destruction caused by the coronavirus will be a long term problem for oil and gas. 2020 capex is likely to be cut even further and 2021 capex spending will be even lower.”

Meanwhile, as the side effects of the pandemic and price collapse linger, Rigdon said vessel operators should begin bracing for what is shaping up to be very stormy conditions going forward. “I don’t have any data points yet, but certainly we’re preparing for what’s going to be a slowdown. I’m certain we’re going to see demand destruction, but the question is how much demand destruction and for how long.”

Plowing through the fossil fuel noise