Scientists at federal fisheries laboratories are investigating how sound generated by the construction and operation of offshore wind turbines may affect black sea bass – a valuable species in the Northeast that is attracted to underwater structures like turbine foundations.

“No one knew for sure how much black sea bass can hear and how that changes as they age,” said Beth Phelan, a fishery biologist at the Northeast Fisheries Science Center’s laboratory at Sandy Hook, N.J. and a co-author of the study, in a narrative published online by the National Oceanic and Atmospheric Administration. “We do know that black sea bass are attracted to underwater structures, and have anecdotal information that they move away from noise. We had to first determine the range of sounds they can hear by giving them a type of hearing test, much like we do to humans.”

Black sea bass typically congregate around hard structure, including docks, jetties and shipwrecks, and recreational fishermen and charter captains target them around the Block Island Wind Farm turbines off Rhode Island. The species supports a commercial fishery from the Mid-Atlantic into southern New England, and with waters warming in the Northeast black sea bass are extending their range into the Gulf of Maine. 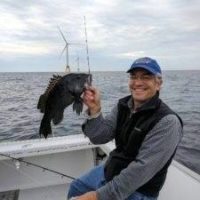 An angler with a black sea bass caught near the Block Island Wind Farm in Rhode Island. Anglers for Offshore Wind Power photo

Researchers used 20 black sea bass for the study, collected from the wild in waters off Massachusetts and New Jersey. They held the fish in flow-through saltwater tanks at seasonal temperatures at the science center’s James J. Howard Marine Sciences Laboratory at  Sandy Hook, and the Woods Hole Oceanographic Institution in Woods Hole, Mass., both long known studying fish physiology and behavior.

To test how the fish respond to sound, researchers attached electrodes to the fish that measured electrical signals generated by their brains in response to sound, while observing how the fish reacted. With underwater speakers, they played recordings of noise generated during pile-driving construction work at the Woods Hole ferry terminal in 2018-2019 – similar to the sounds emitted when driving piles for wind turbine foundations.

Results of this study so far, published in the Journal of Experimental Biology, indicate black sea bass can hear sounds in the 80 to 1000 Hertz range, with highest sensitivities to sounds at lower frequencies. The fish had the greatest sensitivities to the pile-driving recordings, which were in the 70 – 200 Hz range, with 150 Hz the most sensitive frequency. Compared to results from other fish species tested using similar techniques, black sea bass have a fairly typical hearing bandwidth. However, they have more sensitivity at lower frequencies.

“Their study is the first to look at the impact of ocean noise on this fish species,” according to NOAA. “It found that younger fish were more sensitive to sounds than older fish. The frequencies at which the fish are most sensitive to sound directly overlap with frequencies of human-produced noise pollution. This noise comes from activities like shipping and the underwater construction required for offshore wind farms.”

“We know very little about the impact of continuous sound produced by operating wind farms on many fish species, including black sea bass,” said Phelan. “With multiple planned construction activities occurring along the northeast U.S. coast, the construction and operational sounds from these developments may simultaneously affect fish inhabiting these areas and those at an unknown distance.”

The study was funded by the Bureau of Ocean Energy Management Environmental Studies Program.

Read the full description of the project here.