As part of the ongoing Hurricane Ida response, the Coast Guard conducted overflights on Sunday that focused on two locations previously identified for further investigation.

Members of the National Strike Force aboard a Coast Guard HC-144 flew over Bay Marchand, south of Port Fourchon, La., and Enterprise Offshore Drilling’s mobile offshore drilling unit (MODU), the Enterprise 205, in the Gulf of Mexico, in a continued effort to track and monitor any threats they may pose to the environment.

Enterprise Offshore said its Enterprise 205 MODU was safely secured and evacuated prior to the arrival of Hurricane Ida, and it did not suffer any damage or failure of the company's environmental safeguards. Enterprise personnel arrived back at the facility on Sept. 1 and confirmed the integrity of all systems and that no environmental discharges occurred from our facility.

Coast Guard crews observed no active discharge at the Bay Marchand site or near the Enterprise 205 site.

During the flight, it was discovered that a wellhead belonging to S2 Energy was discharging oil approximately five miles away from the Bay Marchand site. S2 Energy said they have since secured the wellhead and it is no longer discharging oil.

S2 Energy has contracted an oil spill response organization to boom the area in order to mitigate the spread and collect any recoverable product. The affected area is approximately 100-yards long by 100-yards wide. Estimates of the release are yet to be determined.

The Coast Guard is prioritizing nearly 350 reported incidents for further investigation by state, local, and federal authorities in the aftermath of Hurricane Ida.

The Bureau of Safety and Environmental Enforcement (BSEE) activated its Hurricane Response Team as Ida made its way through the Gulf. The Hurricane Response Team is monitoring offshore oil and gas operators in the Gulf as they return to platforms and rigs after the storm. The team works with offshore operators and other state and federal agencies until operations return to normal.

Based on data from offshore operator reports submitted as of 11:30 CDT today, personnel are still evacuated from a total of 79 production platforms, 14.11 percent of the 560 manned platforms in the Gulf of Mexico. Production platforms are the structures located offshore from which oil and gas are produced. Unlike drilling rigs, which typically move from location to location, production facilities remain in the same location throughout a project’s duration.

Personnel are still evacuated from four rigs (non-dynamically positioned), equivalent to 36.36 percent of the 11 rigs of this type currently operating in the Gulf. Rigs can include several types of offshore drilling facilities including jackup rigs, platform rigs, all submersibles and moored semisubmersibles.

A total of two DP rigs remain off location. This number represents 13.33 percent of the 15 DP rigs currently operating in the Gulf. DP rigs maintain their location while conducting well operations by using thrusters and propellers. These rigs are not moored to the seafloor; therefore, they can move off location in a relatively short time frame. Personnel remain on-board and return to the location once the storm has passed.

As part of the evacuation process, personnel activate the applicable shut-in procedure, which can frequently be accomplished from a remote location. This involves closing the subsurface safety valves located below the surface of the ocean floor to prevent the release of oil or gas, effectively shutting in production from wells in the Gulf and protecting the marine and coastal environments. Shutting in oil and gas production is a standard procedure conducted by industry for safety and environmental reasons. 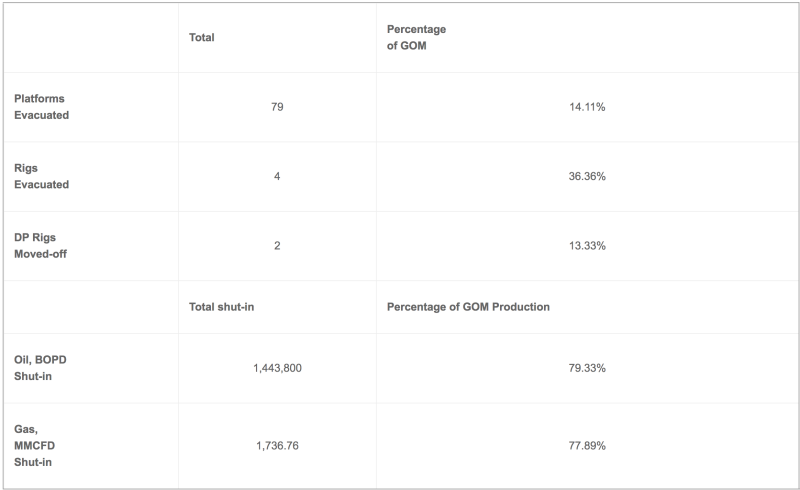 Almost half the platforms in Gulf evacuated ahead of Laura