Crowley Fuels LLC took delivery Tuesday of a new Alaska-class 100,000-bbl., articulated tug-barge (ATB), which will be used to transport multiple clean petroleum products for the Alaska market. The ATB was built by Bollinger Shipyards at its Amelia, La., facility. 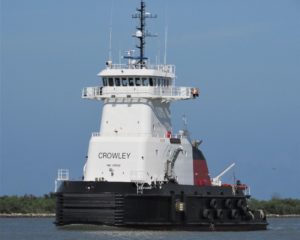 “On behalf of our skilled workforce, along with a strong operational support group, the Bollinger team is proud to have built this ATB for Crowley Fuels,” Bollinger Shipyards president & CEO Ben Bordelon said in a statement announcing the delivery. “Contracts like this to build Jones Act classed ATB units, create and protect many jobs for U.S. mariners, shipyards and ancillary vendors.”

The tug has twin Schottel SRP-560 azimuthing Z-drives with carbon fiber drafts to enhance maneuverability, and an Intercon C-series coupling system with a first-of-its-kind lightering helmet. The tug is fitted with two GE 8L250MDC engines that develop 3,384 hp at 1,000 rpm each. The engines meet EPA Tier 4 and IMO Tier III emissions standards. The tug has a running speed of approximately 11 knots. The Aveogan has a capacity of 11 crew.

The three 99-kW John Deere SSDG and one 88-kW John Deere generators on the tug and barge meet EPA Tier 3 and IMO Tier II emissions standards. In addition, a closed loop, freshwater ballast system will eliminate the need to discharge tug ballast water into the sea.

The tug is equipped with a fire monitor and foam proportioner, providing off-ship firefighting capabilities to the barge. The barge is also outfitted with spill response gear and a hydraulic boom reel with 2,000 linear feet of inflatable boom to support spill response efforts. The vessel was built with enhanced features to benefit the crew, including 45-degree sloped staircases, interior sound deadening and dedicated heads in each cabin.

“We are pleased to take delivery of this high-performance ATB, Aveogan-Oliver Leavitt, and look forward to getting her up to Alaska to begin serving our partners at Petro Star,” said Rocky Smith, senior vice president and general manager, Crowley Fuels. “We congratulate the men and women at Jensen who designed the vessel and the team at Bollinger Shipyard who built it.”