The overnight paddlewheeler will be christened in New Orleans on April 4 ahead of its inaugural sailing from New Orleans to Memphis, Tenn., April 5-13. The riverboat will join the American Queen and American Duchess on the Mississippi, Tennessee, Ohio and Cumberland rivers.

During the sea trial, the American Countess navigated through a section of the Intracoastal Waterway in Houma, La., en route to Morgan City, La., as part of an extensive river trial completing several key tests and simulations as part of their Certificate of Inspection issued by the Coast Guard. Several Coast Guard officials were on board during the trials to monitor progress. The completion of this trial puts the vessel on track for an on time delivery from Gulf Island Shipyard in Houma. 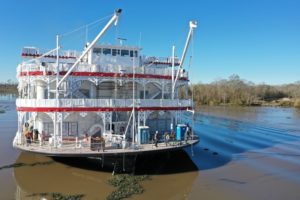 The American Countess will transit to New Orleans in late February where it will spend four weeks undergoing finishing touches while at port. Crewmembers will join the ship to aid in the final preparations while undergoing intense safety and service training prior to the VIP cruise and christening March 31 through April 4.

“The successful completion of these sea trials is a testament to the hard work of our team,” John Waggoner, founder and CEO of American Queen Steamboat, said in a statement. “As we approach the grand debut of the American Countess, I could not be more excited to bring this new experience to our guests.”

The design will offer plenty of open space for gathering, especially the portside bar, running 120′ in length with floor-to-ceiling glass giving guests panoramic view of the rivers. The vessel has four decks, including a sun deck, and 123 staterooms in four categories.

Headquartered in New Albany, Ind., American Queen is one of several companies contributing to the renaissance of domestic river cruising. It built its fleet buying and refurbishing used vessels beginning in 2011 with the purchase of the 236-passenger American Queen from the Maritime Administration. Two years later it bought the 223-passenger American Empress from Marad. Both boats, constructed with Title XI federal loan guarantees, were turned over to the agency after the 2008 collapse of Majestic America Line.

In 2018, the company also bought the Bahamas-flagged Victory I and Victory II, 202-passenger vessels that were the original Cape Cod Light and Cape May Light — to expand its reach to the Great Lakes and possibly beyond. The 300’x50’x13’ sister ships were part of Victory Cruise Lines, which is now a sister brand to American Queen. American Queen Steamboat is a Hornblower company.

Following the christening, the American Countess will start her maiden voyage on April 5, sailing from New Orleans to Memphis, Tenn., on the Antebellum South itinerary.