The federal Bureau of Ocean Energy Management has pushed back to December 2020 a final environmental impact statement on the Vineyard Wind offshore wind energy project, meaning backers of the 800-megawatt development off southern New England will miss their 2022 target to start making electricity.

Preliminary findings from that study – examining the potential cumulative effects of Vineyard Wind and more than a dozen other utility-scale projects planned off the East Coast – were originally anticipated for completion in March 2020. Rumors in the offshore industry circulated in late 2019 that the process could extend into late 2020, but regulators confirmed Feb. 11 they have been pushed back that to June 12 – with a final decision by Dec. 18. 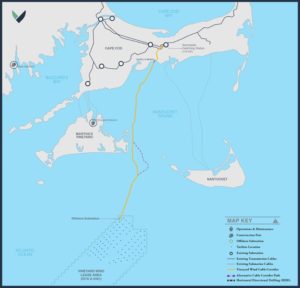 “While we need to analyze what a longer permitting timeline will need for beginning construction, commercial operation in 2022 is no longer expected,” said Lars Pedersen, CEO of Vineyard Wind, in a Feb. 11 response to the agency update. “We look forward to the clarity that will come with a final EIS so that Vineyard Wind and deliver this project to Massachusetts and kick off the new U.S. offshore wind industry.”

The company is talking to Treasury Department officials about how it might preserve its 18 percent investment tax credit eligibility for its Vineyard Wind 1 Project – the first 400-megawatt phase of what would be an 800 MW array – and others that may be delayed due to what the company calls “unforeseeable regulatory action.”

Interior Secretary David Bernhardt ordered the broader review in August 2019, after the National Marine Fisheries Service refused to sign off on a draft environmental impact statement for the Vineyard Wind project. NMFS officials wanted more study of how the project south of Martha’s Vineyard, Mass., could affect the ocean environment, marine mammals, commercial fisheries and other aspects.

“Regulatory delays – especially of a new industry – could open the door to unexpected and unintended bottlenecks and holdups,” NOIA president Erik G. Milito said in a statement after the BOEM announcement.

“However, the complexity of what Interior is doing should not be forgotten,” Milito added. “It is critically important that Interior issue a robust Final Environmental Impact Statement (FEIS) that can withstand the automatic litigation that could be filed in an attempt to block the ascendant offshore wind industry.”

Milito reiterated a call by some wind energy backers to lighten the burden of complying with the National Environmental Policy Act, as proposed by the Trump administration.

“The very recent NEPA reforms proposed by the Council on Environmental Quality can help ensure that multi-billion dollar U.S. investments, such as the Vineyard Wind project, do not have to face these delays in the future,” he said.

Despite President Trump’s own criticisms of wind power – a common feature of his rally speeches – his administration’s 2020-21 budget proposal would allocate an additional $5 million for BOEM’s renewable energy planning. That would boost it to $26.5 million a year, at a time when the agency is examining more potential offshore lease sales in the New York Bight, and a first round of offerings in three areas off California.