WorkBoat selects 4,500-passenger ferry as its 2021 Boat of the Year

WorkBoat recognized the 10 Significant Boats of 2021 and named its Boat of the Year at an awards ceremony at the 41st International WorkBoat Show Wednesday afternoon. The 2021 Boat of the Year is the Michael H. Ollis, a 4,500-passenger ferry built by Eastern Shipbuilding Group, Panama City, Fla., for the New York City Department of Transportation Staten Island Ferry Division. 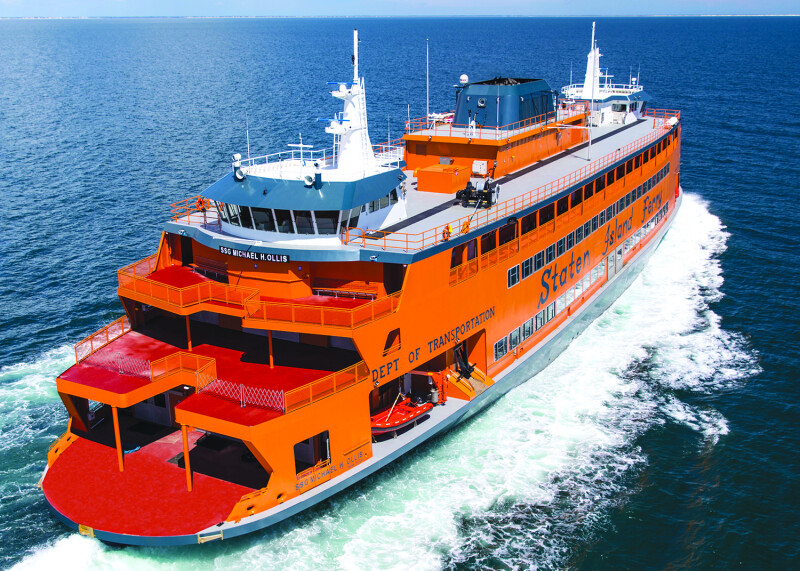 The second Ollis-class ferry, Sandy Ground, completed sea trials in November and is scheduled to be towed up to New York from ESG’s Port St. Joe shipyard this month. Delivery of the third ferry, the Dorothy Day, was not released.

Eastern was awarded a $257 million contract to build the three ferries in 2017.

"It’s an honor to be recognized at the largest commercial shipbuilding event in the world and to be selected for this prestigious award," said Joey D’Isernia, president of Eastern Shipbuilding. "The Michael H. Ollis Staten Island Ferry is in a league of its own with the Buy America certifications, environmental protections, high energy efficiency, innovative safety measures, powerful performance, and elegant design features. We are proud to deliver this exceptional vessel that millions of passengers will get to ride."

With a design draft of 13', the three new Ollis-class double-ended ferries are from a design by Elliott Bay Design Group, Seattle. Each 4,500-passenger ferry features four Electro-Motive Diesel (EMD) 12-710 EPA Tier 4 marine propulsion engines, producing 9,980 hp, with two engines powering one Reintjes DUP 3000 P combining gear, and one 36 RV6 ECS/285-2 Voith Schneider propeller at each end of the vessel. Geislinger torsional couplings are installed on the EMD flywheels and provide torsional damping and driveline misalignment from the resiliently mounted EMD engines. The ferries will each have a crew of 16.

The layout of the three new Ollis-class ferries is similar to the  52-year-old John F. Kennedy ferry, a favorite of Staten Island Ferry commuters and tourists because of its outdoor promenade seating and extended foredecks. The Kennedy and two other boats are expected to be retired once the new ferries come into service.

The new ferries are larger, reflect modern technology, and will operate more safely in extreme weather conditions, Eastern said. They feature popular design elements of past Staten Island ferries and new customer service amenities such as more comfortable seating and phone charging outlets and an oval upper-deck promenade that will for the first time serve as an outdoor “walking track” for ferry riders. They have the latest in marine technology for energy efficiency and environmental friendliness. There are design features on the vessels that are part of the emergency response plan with the city of New York.

New York City has operated Staten Island Ferry since 1905. The ferries, which run 24/7 on a 5.2-mile route between St. George Terminal on the north shore of Staten Island and Whitehall Terminal in Lower Manhattan, carry about 23 million passengers annually.

Here are the other winners:

Owner: Maid of the Mist

Builder: Maid of the Mist

WorkBoat names its 10 Significant Boats of 2021