The National Transportation Safety Board announced last week the successful launch of its new public-facing database query system for NTSB investigations, safety recommendations and dockets across all of the NTSB’s investigative modes.

The new query system, Case Analysis and Reporting Online – or CAROL – not only helps users more easily access NTSB data, but it also changes the way the NTSB shares its information with other agencies.

Previously, there were three distinct and separate query systems customers could use to access NTSB data; the docket query system, the aviation database query system, and the NTSB safety recommendations query system. That meant there was no way to submit queries for investigative details or for findings in non-aviation investigations.

CAROL allows users to conduct queries for all modes (rail, pipeline, hazardous materials, marine, highway and aviation) and to move seamlessly through the information. CAROL allows users to quickly find data to questions like, “to what degree are safety management systems, or impairment, or fatigue a factor in NTSB-investigated accidents across all modes of transportation?” 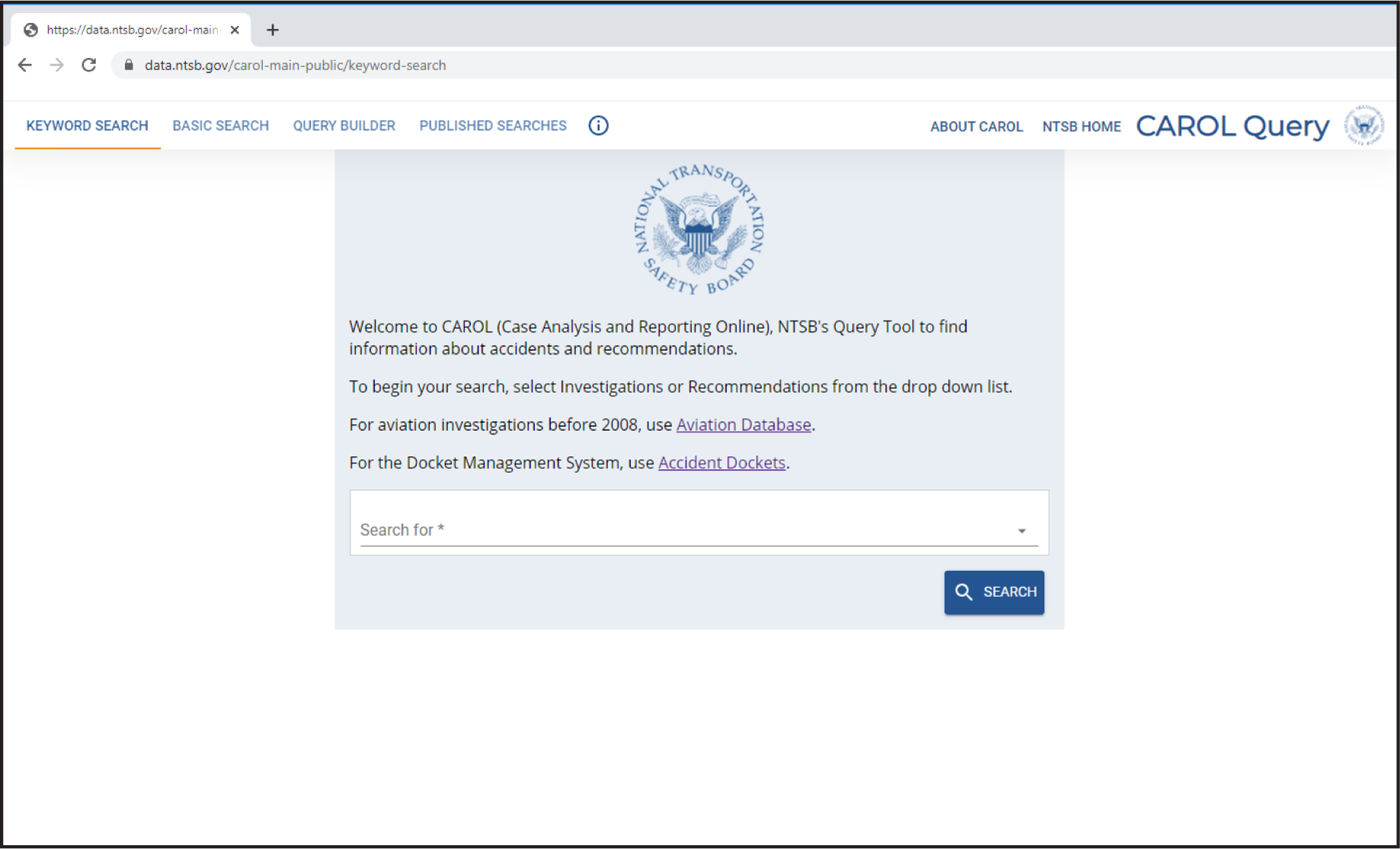 (Image of the CAROL query tool on the NTSB website)

Development of the CAROL query system has taken a little more than two years with a mandate and funding coming from Congress in the NTSB’s reauthorization where Congress charged the NTSB to develop and maintain a multi-modal accident database management system for investigators to improve the quality of accident data the NTSB makes available to the public.

Before the reauthorization, the NTSB was looking for ways to improve data collection and retrieval. The Office of Marine Safety sought the ability for customers to better search marine accident investigation data and the Office of Aviation Safety was looking to streamline its reporting processes.

CAROL, an acronym with a nod to Carol Floyd, an analyst who retired in 2017 after a four-decade career at the NTSB, is the query tool, which gathers data from the NTSB’s new investigations management system known as SAFTI (System for Analysis of Federal Transportation Investigations).

The appropriation of funds allowed the NTSB to invest in streamlining its internal processes, which resulted in SAFTI. Without that standardization internally, the NTSB would not have been able to get the functionality it now has with CAROL.

CAROL’s three search options are keyword search, basic search and query builder. The keyword search allows users to search one value from one of six fields, while basic search allows users to search any of seven available fields. The query builder allows users to select from a variety of investigative and safety recommendation fields. The NTSB will also publish queries that address particular topics such as safety recommendations associated with the NTSB’s Most Wanted List of Transportation Safety Improvements.

All of the more than 15,000 safety recommendations the NTSB has issued since its inception in 1967 are available in CAROL. Investigative data from rail, pipeline, hazardous materials, highway and marine is currently being migrated into CAROL and will continue in the coming months.

In aviation, all of the investigations since 2008 are also available with the exception of investigations involving multiple aircraft. These had previously been written up as two accident reports, one for each aircraft involved, each referencing the other report.

Analysts are in the process of combining each of the 350 accident reports that were generated from 175 investigations involving multiple aircraft since 2008, into single documents containing both reports. Although these newly combined reports are not currently available, they will again be accessible as soon as the work is completed, which is expected by the end of October.

CAROL also provides a self-service way for partner agencies to download data through APIs published on the NTSB’s website. The capability will give the NTSB better control over what the agency is publishing, a better understanding of who is interested in our data and a better way of authenticating data with other agencies.

“The tool provides several user-friendly options to access agency information and moves us way ahead in meeting the federal government’s data strategy and requirements for open data,” said Rahiq Syed, Chief of the Enterprise Architect Division in the NTSB’s Office of the Chief Information Officer.