Today, the National Transportation Safety Board issued four safety recommendations in its final report on the agency’s investigation of the fatal 2017 collision between the USS Fitzgerald and the containership ACX Crystal.

The June 17, 2017, collision occurred shortly after the 504.5' Navy destroyer Fitzgerald, with 315 people on board, departed its homeport of Yokosuka, Japan, bound for the Philippines. The Fitzgerald was traveling southbound at about 22 knots in the bay of Sagami Nada off Japan’s Honshu Island, while the 730', Philippine-flag, containership ACX Crystal with 21 people on board was traveling east-northeast at about 18.5 knots in the bay, headed to Tokyo, from Nagoya, Japan. (The ACX Crystal is owned by Olympic Steamship Company S.A., Panama.) Neither vessel radioed the other as the distance between the ships continuously decreased. Actions taken by watch officers to avoid impact seconds before the collision were too late and the ships collided. Seven Fitzgerald crewmembers died in the accident, and three others suffered serious injuries. No injuries were reported aboard the ACX Crystal. The destroyer sustained extensive damage to its forward starboard side and the ACX Crystal sustained damage to its bow.

The NTSB was the lead federal agency for the investigation and delegated its authority to the U.S. Coast Guard to gather documents and perform interviews on behalf of the NTSB. The NTSB developed the analysis and probable cause based on evidence gathered by the Coast Guard and additional documentation provided by the Navy. 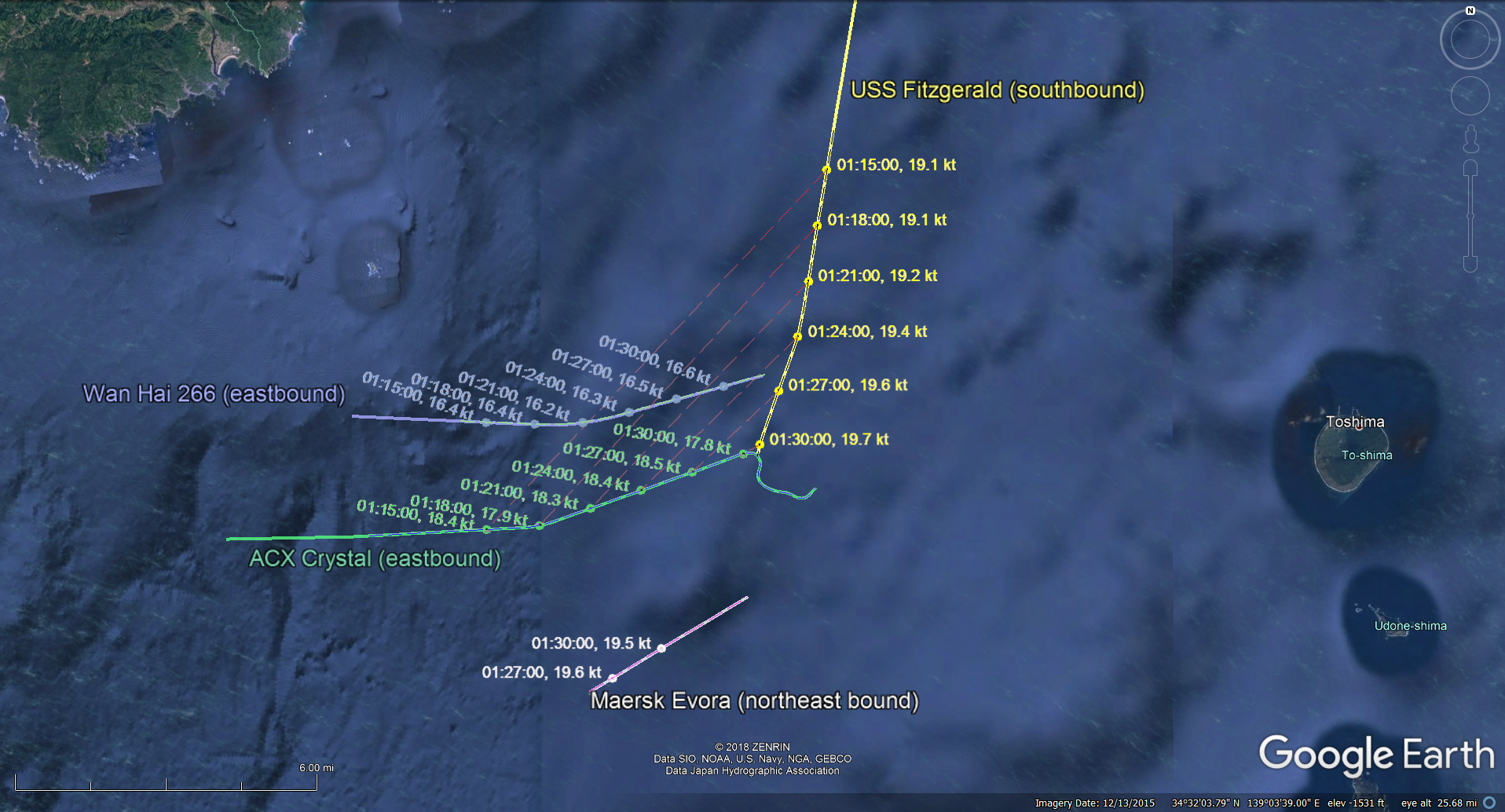 (This graphic depicts the reconstructed paths of the US Navy destroyer Fitzgerald, the container ship ACX Crystal, the Maersk Evora and the Wan Hai 266 in the bay of Sagami Nada the evening of June 17, 2017.  The Fitzgerald and the ACX Crystal collided and seven US sailors died and three others injured as a result of the accident. NTSB graphic by Kevin Renze/Christy Spangler, background by Google Earth)

In the report the NTSB says the Fitzgerald’s bridge team’s failure to take early and substantial action to avoid collision, as the give-way vessel in a crossing situation, is the probable cause for the collision. The NTSB also says ineffective communication and cooperation among the crew on the Fitzgerald’s bridge and combat information center, coupled with the commanding officer’s insufficient planning for the hazards of the destroyer’s intended transit, contributed to the collision. The ACX Crystal’s watch officer’s lack of early detection of the Fitzgerald and insufficient actions to avoid collision, once in doubt of the destroyer’s intentions, also contributed to the collision.

“This tragedy highlights the importance of keeping a vigilant watch, determining the risk of collision, and the role of the automatic identification system,” said Morgan Turrell, acting director of the NTSB’s Office of Marine Safety. “If you are in doubt of another vessel’s intentions, you need to use proper sound and visual signals, and then take early and effective action to avoid a collision.”

As a result of its investigation the NTSB issued three safety recommendations to the Navy and one to Sea Quest Management Inc., the operator of the ACX Crystal. Two safety recommendations issued to the Navy call for review and revision of fleetwide training and qualification requirements for officers of the deck related to the collision regulations, as well as review and revision of bridge resource management training. The third recommendation to the Navy seeks the broadcast of automatic identification system information when in the vicinity of commercial vessel traffic, at all times, unless such broadcast could compromise tactical operations. The safety recommendation issued to Sea Quest seeks additional training for navigation officers on collision avoidance regulations, radar and automatic radar plotting aids.

All American to build another NOAA research vessel