NTSB determines cause of 2021 containership fire

An incorrectly installed section of main engine fuel oil return tubing led to an engine room fire aboard a containership off the coast of Santa Barbara, Calif., in 2021, the National Transportation Safety Board said Tuesday.

Marine Investigation Report 22/15 details the NTSB’s investigation of the April 28, 2021, fire aboard the 7,831-TEU APL containership President Eisenhower while transiting through the Santa Barbara Channel. The 984'x140' ship was transiting to Oakland with a crew of 22. The crew extinguished the fire using the engine room’s fixed carbon dioxide fire extinguishing system. As a result of the fire, the vessel lost propulsion and drifted for several hours before being towed to the Port of Los Angeles. No pollution or injuries were reported. Damage to the vessel totaled an estimated $8.22 million.

A crewmember on watch noticed smoke coming from an open engine room hatch early in the morning on April 28. Two crewmembers donned firefighter outfits and attempted to use portable fire extinguishers to quell the fire. Realizing the fire was “too much,” the captain decided to release carbon dioxide into the engine room.

The day before the vessel’s departure, the second engineer installed a new section of steel fuel oil return tubing for the main engine. A post fire examination showed that a compression fitting on the end of the newly installed section of fuel return tubing had disconnected, causing the ultra-low sulfur diesel fuel oil the engine was burning to spray. CCTV footage from the vessel showed diesel oil spray about 30 minutes before the fire started. Within one minute after the fire started, cardboard and wooden boxes of spare parts, which were stored one deck above the main engine and next to the auxiliary boiler, caught on fire.

Investigators found that an unshielded and uninsulated exhaust valve compensator flange acted as an ignition source for the spraying diesel fuel. An examination of the disconnected fuel oil return tubing and failed compression fitting revealed that the compression fitting’s sealing ferrule was not sufficiently swaged to the steel tubing. 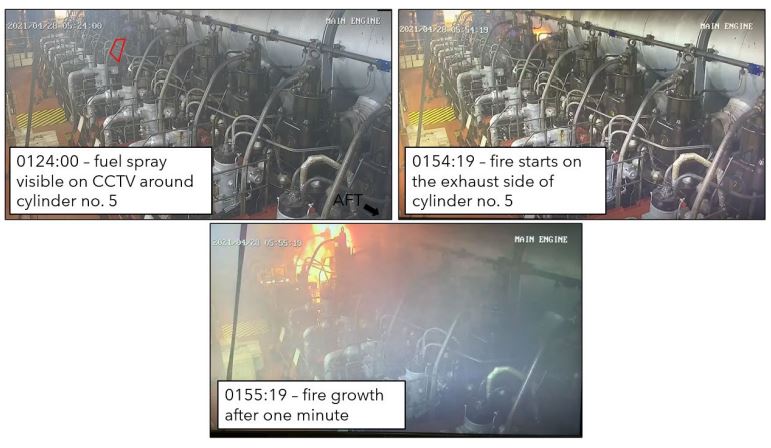 (CCTV screen captures of the main engine showing fuel spray in the area around the no. 5 cylinder about 30 minutes before the fire, the moment the fire starts and the progression. Note: CCTV time stamps are four hours ahead. Source: APL)

The NTSB determined the probable cause of the engine room fire aboard the containership President Eisenhower was a crewmember insufficiently swaging a compression fitting ferrule during the installation of fuel oil return tubing for a main engine’s cylinder, allowing an end of the tubing to disconnect and spray fuel oil onto a nearby unshielded and uninsulated cylinder exhaust component.