The U.S. Department of Transportation and the Maritime Administration announced last week the historic appointment of Rear Adm. Joanna M. Nunan (Coast Guard, Ret.) as the next superintendent of the U.S. Merchant Marine Academy (USMMA). Nunan is first woman to be appointed USMMA superintendent. 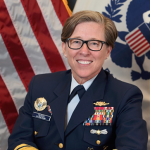 It's been a big year for women in the maritime industry. On June 1, Adm. Linda Fagan was sworn in as the 27th commandant of the Coast Guard. Adm. Fagan became the first woman, and first mother, to lead any branch of the U.S. Armed Forces.

Nunan, who spent more than three decades in the Coast Guard, has commanded units at every level both afloat and ashore. She will begin work at USMMA in Kings Point, N.Y., in a few weeks.

“Rear Admiral Joanna Nunan is the right leader at the right time for the U.S. Merchant Marine Academy,” said U.S. Transportation Secretary Pete Buttigieg. “Her years of experience as a senior military leader — including command at sea — have prepared Rear Admiral Nunan to shape the future of the USMMA and help ensure the safety and success of its extraordinary midshipmen.”

“Rear Admiral Nunan is uniquely prepared to lead and strengthen USMMA on every front,” said Maritime Administrator Ann Phillips. “She understands both the critical role USMMA plays in our economic and national security and the organizational transformations that are essential to ensuring USMMA prepares students in a safe and respectful environment to excel in a maritime industry undergoing rapid change.”

Nunan retired earlier this year as the Coast Guard’s deputy for personnel readiness. In that role, she oversaw the Coast Guard’s entire personnel enterprise, including the recruitment, training, support, and retention of all active duty, reserve, and civilian personnel. She also supervised the Coast Guard Academy and served on its Board of Trustees.

Previously, Rear Adm. Nunan served as the assistant commandant for human resources. In that role, among her many responsibilities, she helped spearhead efforts to expand diversity and inclusion in the Coast Guard, including formulating policy changes focused on increasing the retention of women in the service. She also served as a member of the Coast Guard’s Sexual Assault Prevention, Response, and Recovery Committee.

A Bridgeport, Conn., native, Nunan graduated from the Coast Guard Academy in 1987.