A 35-year veteran of the Sandy Hook Pilots Association  died Monday after a fall while boarding a containership inbound to New York Harbor, according to the Coast Guard and pilots.

Dennis R. Sherwood, of Freehold, N.J., was climbing an accommodation ladder to board the U.S.-flagged Maersk Kensington at the Ambrose Light pilot station outside the harbor approaches at 4:30 a.m., Coast Guard officials said. 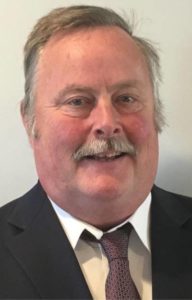 Captain Dennis Sherwood died of injuries after a fall while attempting to board an inbound containership. Photo courtesy Sandy Hook Pilots.

Sherwood fell back into the pilot boat, which rushed him back to Staten Island to be evacuated to Richmond University Medical Center, where he died of his injuries, the Coast Guard said.

In a statement the Sandy Hook Pilots Association said Sherwood had more than 35 years of experience guiding vessels in and out of the Port of New York and New Jersey.