Meanwhile an entangled right whale spotted off North Carolina – and the discovery of a dead right whale calf near shore – added pressure for the federal government to do more to protect that highly endangered species.

The ongoing protests from wind project opponents did not sway New Jersey Gov. Phil Murphy, a Democrat whose administration strongly backs offshore wind development. Murphy said Friday he did not think work on the state’s Ocean Wind 1 and Atlantic Shores projects should be suspended as critics demanded.

Two days earlier, Murphy announced that Atlantic Shores Offshore Wind LLC had signed a letter of intent with the state Economic Development Authority to lease and develop 35 acres of land at the New Jersey Wind Port, to be a construction base for its 1.5-gigawatt project planned off Long Beach Island.

The whale suffered blunt trauma injuries “consistent with those from a vessel strike,” the Marine Mammal Stranding Center reported Sunday afternoon after a necropsy on the beach.

“Injuries and hemorrhaging were observed on the head and thoracic region, as well as along the right side and the pectoral flipper. These findings will be confirmed through laboratory analysis in the coming weeks,” according to the stranding center statement. “Blubber thickness indicated that the whale was in good condition. The whale’s stomach was full of partially digested fish and there was fecal matter in the intestines, indicating the whale had been actively feeding prior to these injuries.”

The new stranding amplified calls from opponents of New Jersey offshore wind projects, who counted it as the 7th such incident on New Jersey and New York shores in recent weeks. That brought an immediate pushback from environmental groups supporting renewable energy.

The New Jersey environmental group Clean Ocean Action – allied with local beach town community groups opposing wind power developments off their shores – reiterated their demand for “a thorough, transparent investigation of these whale deaths performed by federal agencies with independent, third-party scientist oversight” and “a hard stop to all current in-water activity by the offshore wind industry, until the investigation is complete.”

A half-dozen other New Jersey environmental groups, committed to renewable energy, shot back, saying the claim about the whale deaths “correlating it to wind turbine site exploration is unfounded and premature.”

“The coalition encourages more research into the potential impacts of these turbines and their construction on wildlife but don’t believe plans for future production should be halted unless a direct correlation is uncovered and proven,” the groups including New Jersey Sierra Club, New Jersey Audubon and the League of Conservation voters said Friday.

Groups calling for shutdown of wind projects are alleging the whales could have been harmed by survey vessels working offshore, and use of acoustic technology to chart the sea floor.

The humpback found in Atlantic City Dec. 23 had a head injury that could have been inflicted by a vessel, according to the nonprofit Marine Mammal Stranding Center in Brigantine, which examined the animal and obtained tissue samples before it was buried on the beach.

The center did the same for the latest casualty in Brigantine. “As with all large whales, our samples are sent to pathologists and other researchers who are tasked with investigating whale mortalities,” according to a statement from the center. “These results can take several months to come back before a cause of death can be determined, if at all.”

The stranding center cautioned against assigning causes to the whale deaths, noting there are large numbers of whales feeding in the region, and advisories in effect from the National Oceanic and Atmospheric Administration for vessel operators to limit speed to 10 knots.

"Although there has been speculation about whether these whale deaths are linked to wind energy development, at this point no whale mortality has been attributed to offshore wind activities. We will continue to gather data and go where the science leads us."

Pro-wind power environmental groups pointed to an increasing population and feeding activity of whales in the New York Bight, a trend widely noted by fishermen and marine scientists alike as whales feed on menhaden and other prey off the beaches.

“The habitat use and surface foraging behavior of juvenile humpback whales may make them particularly vulnerable to vessel strikes in nearshore waters,” the environmental groups suggested. “The increase in strandings could be a proportionate response to an increase in population, especially if we’re seeing more juveniles.“

Immediately after Clean Ocean Action first made its demand for a shutdown of wind work, the National Oceanic and Atmospheric Administration responded by noting it has been tracking an “unusual mortality event” involving 174 humpback whales along the entire U.S. Atlantic coast since January 2016. That timeframe “pre-dates offshore wind preparation activities in the region,” said NOAA spokeswoman Lauren Gaches.

Two dead humpback whales were found on North Carolina beaches near Cape Hatteras and Cape Lookout in December, according to the National Park Service.

Allison McLeod, policy director for the New Jersey League of Conservation Voters, said she is a “former professional marine mammal observer with a background in marine science and biology.”

“We need to base our decision making on science and data, not emotions or assumptions,” McLeod said in the environmental groups’ statement. “The vessels on this offshore wind survey, which are equipped with marine mammal observers, have not reported any such incidents. It is therefore irresponsible to assign blame to offshore wind energy development before a routine full investigation is completed.”

“There were several wraps of line around the mouth and tail, with additional line trailing behind the whale,” according to an agency update. “After reviewing documentation of this new entanglement case, NOAA Fisheries biologists have made a preliminary determination that it meets the criteria of a ‘serious injury.’ This means the whale is likely to die from this injury.”

One day before on Jan. 7, a male right whale calf was found dead under a pier near Morehead City, N.C. Estimated to be no more than a couple of weeks old, the calf had been seen Jan. 3 in Beaufort Inlet, N.C., apparently “underweight and in poor health,” with its mother nowhere to be seen, according to NOAA.

With only around 340 animals estimated to survive in the North Atlantic right whale population, enormous pressure is on NOAA and the Northeast lobster fishery to reduce the danger of gear entanglements. Further measures to reduce entanglement risks will be on the table for other fixed-gear fisheries along the East Coast including pot gear and gill nets. 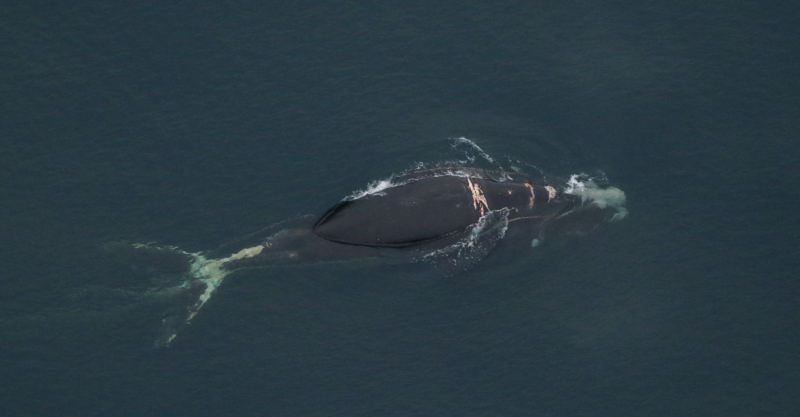