“The majority of our boats were similar. We had mostly electronics changes until Subchapter M came along,” said Jeff Brumfield, FMT’s director of vessel engineering and construction. “Since we’ve known about what the Coast Guard expects through Subchapter M, we’ve been working to do the things necessary to be compliant.”

That includes taking delivery in May of its first new construction Coast Guard Subchapter M towboat, a 90-footer from Eastern. 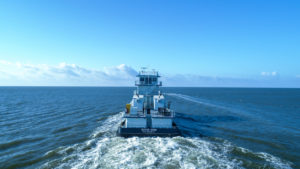 Prior to Subchapter M implementation, towboats were not required to carry certificates of inspection (COI) from the Coast Guard. But in the interest of improved safety on U.S. waterways, towing vessel owners are now involved in a multi-year, multifaceted schedule of compliance which must be completed by 2022.

Under Subchapter M, operators must have a COI from the Coast Guard to maintain fleet operations. Two options are available to help them reach compliance: under the Towing Safety Management System option, routine inspections of vessels will be done by an outside auditor or third party organization (TPO), based on a safety system tailored to a fleet’s needs. For operators preferring not to develop their own safety systems, they can opt to have the Coast Guard do the inspections.

“I can see the difference in safety. I’m all for Sub M,” said Brumfield. “It has everything geared toward safety.”

“This was our first boat for Florida Marine and our first Subchapter M boat,” said Tara Steiner Marshall, the shipyard’s owner and president. (Marshall took over the yard’s ownership when her father, Russell Steiner, retired in 2019.) “It was a learning process for everybody, but it turned out great. We’re building more boats for them.”

FMT opted to use a TPO to get the new towboat in compliance to receive its COI at delivery.

“They had their own TPO do most everything, and we dealt with them” said Andy Overstreet, Steiner’s vice president and yard supervisor. “We had no contact with the Coast Guard except for a few meetings. Dealing with Florida Marine was pretty easy. You could just pick up the phone and get to ask the right person anything you want.”

FMT officially took delivery of the boat — with its COI — on Oct. 10. “I think the TPO was the right choice,” said Overstreet. “Florida Marine tried to do everything that Coast Guard wanted them to do. The whole process worked well.”

Florida Marine has been around since 1994, but the company really started to grow after Hurricane Katrina in 2005. The storm left the Gulf Coast a jumbled mess. Any boats that weren’t disabled went to work because there was plenty to do.

“We did everything we could do as a company,” said Brumfield.

Much like the marine industry does when an accident occurs, boat companies rushed in to try to make things right. They worked long and hard to put the pieces back together.

It took months to clear debris and get the marine transportation routes back to a semblance of normal. Yet in those months, the long hours produced extra profits for companies operating in the storm’s aftermath.

The following year FMT took delivery of that first newbuild, the beginning of a blossoming of the company’s equipment upgrade, which continued with the David Goin.

And that’s nowhere near the end of it. FMT currently has 18 towboats under construction. Steiner is building 10 of those — four 88 footers and six 76 footers. “We had never built for them before the David Goin,” said Marshall. “We didn’t know their likes and dislikes and they didn’t know ours. They didn’t know our approach to building boats. But I guess it went well because we’re building them 10 more boats.”

In addition to what Steiner is building for them, FMT has the following boats under construction: a 90 footer at Eastern Shipbuilding Group, Panama City, Fla.; two 105 footers with retractable wheelhouses at Gulf Island Shipyards, Houma, La.; three 120 footers at Metal Shark’s Bayou La Batre shipyard in Alabama; and two 120 footers at the company’s own shipyard — FMT Shipyard & Repair — in Harvey, La.

FMT equipment can be found throughout the inland waterway system, including the Mississippi, Ohio, Illinois, Missouri, Arkansas and Tennessee rivers, the Intracoastal Waterway from Brownsville, Texas, to St. Marks, Fla., and the Great Lakes from Calumet, Ill., to Burns Harbor, Ind. The company’s tank barges haul chemicals and petrochemicals, LPG (liquified petroleum gas), crude oil and agricultural liquids, while dry cargo includes coke, aggregate, coal, and ore. “So it depends on what the customer’s needs are as to what size boat and barges are needed for the job,” said Brumfield. “That determines the size and configuration of the tow.”

The FMT shipyard does newbuilds, repowers, full refurbs, carpentry work, seal conversions, quick wheel changes, full underwater services, alignments and steel work. “We repair and maintain our own fleet of boats and barges as well as outside companies,” said Brumfield. The machine shop can handle shafts up to 40' in length.

FMT’s barge fleet currently consists of 297 tank barges (30,000 bbl., 15,000 bbl., 11,000 bbl. and 16,000 bbl. LPG) and 375 hopper barges. Among the services the shipyard has for barges are topside repairs, pump and engine swap outs, heater repairs, pressure barge repairs, and wrap around paint jobs. “Business is good right now,” said Brumfield. “All of our equipment is utilized.”

Barge operators are still moving cargo during the pandemic