MetalCraft Marine US has just delivered three new patrol boats to the U.S. Coast Guard in Pensacola Fla. The 7M is the smallest of the MetalCraft Interceptor model line, but though small it is designed to feel like a big boat with its weight and robust construction and her soft, dry, ride.

The 7M RIB, designated, Cutter-Boat-Large (CB-L) is a Coast Guard IDIQ Cutter Boat replacement program that will see up to 46 7M CB-L’s delivered to the fleet. The boat is powered with a single Volvo Penta D-3 diesel engine with duo prop outdrive and does 38 knots. The boats are designed to ISO 12215 structural standard Category A, (Unlimited Sea State) and ABYC standard for all systems.

As shipboard cutter boats they will be used for a myriad of tasks, from ship’s workboat to search and rescue, to drug interdiction, crew transfer and anything else needed to provide services to the ship and crew.

MetalCraft is also building the state of Ohio’s Department of Natural Resources’ first set of 8M and 10M Interceptors for patrols, search and rescue, fishing violations and support for CBP, USCG and municipal activities on Lake Erie. The Ohio DNR has signed a three-year standing offer with MetalCraft US and were very involved in the final design. 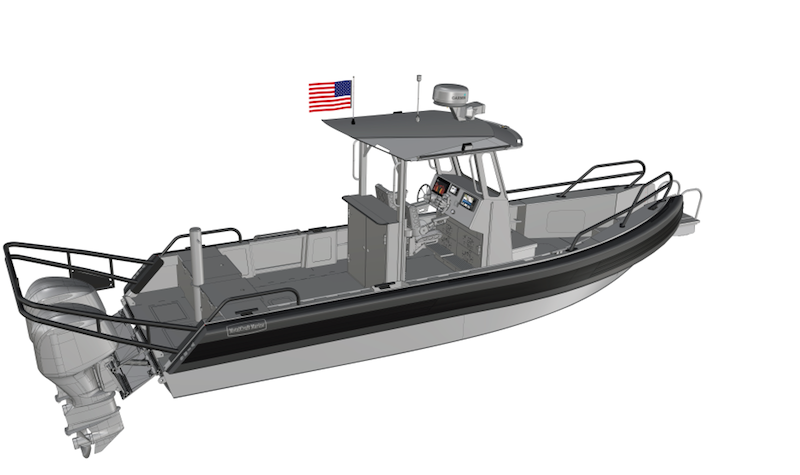 The 8M IN (26') will be powered with Yamaha twin 300 HP O/Bds and will run approximately 50 knots. The 8M IN has two Shoxs bulkhead mount crew seats with height adjustment and drop down seats, safety harnesses and adjustable suspension to suit any driver. The aluminum T-top was expanded in width and length to provide the best weather protection with integral rain gutters, handrails and full weather enclosure tracking. The aft locker is tied into the T-top uprights and has a locking gun locker for long guns and revolver storage and computer docking station as well as abundant space for other items.

The electronics suite includes a main GPS, Garmin 8612X with 24 NM radar and a back up Hummingbird APEX 12.

The larger 10M Interceptor (34') is a full cabin boat with large cuddy and is powered with twin Yamaha 425s with an expected speed of 50 knots. The engines will come with Yamaha’s Seastar independent joy stick steering system. There are twin Shoxs bulkhead mounted seats with adjustable height, suspension and drop out seats, with the seats dropped down it provides easy ingress/egress to the almost full height side sliding port and starboard doors and access to the side decks. A good crewman could lasso a dock cleat from his seat, MetalCraft officials joked in a statement announcing the patrol boat contracts.

The windows are large aluminum framed windows that meet ABYC sight lines. The spotter overhead windows forward and side provide straight up views and high angle side and forward views needed when approaching large ships or tall piers. A unique feature of the side spotter windows is when in a hard over maneuver the side spotter windows are at eye height and remove what would normally be a major blind spot for an operator. The doors have full glass panels for added visibility when coming alongside or searching up close.

The cabin features interior headroom at 6'10" and the cuddy cabin has a generous 5'11" of headroom. The cuddy has a head to starboard and a bench seat to port, and there is a step to access the forward cuddy door to the foredeck. There are hinged panels behind each dash to access all dash accessories and electronics. The main cabin has an L shaped bench seat to port with small table and chart table to starboard and offset starboard oriented sliding aft door.

The cabin is fully climate controlled, with a rear generator mounted in the lazarette locker powering the Dometic HVAC unit with both 16,000 BTUs of heat and air. There is also a powerful diesel heater by Webasto that provides defrost to the windshields and heats both main and cuddy cabins with 40,000 BTU’s of heat.

The electronics on the 10M boat are extensive with a Raymarine Axiom Pro 16” display for the 24 NM radar, GPS, FLIR camera and Blue Force Tracker systems. A second set of Humminbird APEX 16" and 19" screens used for dive missions and powerful side scan sonar. 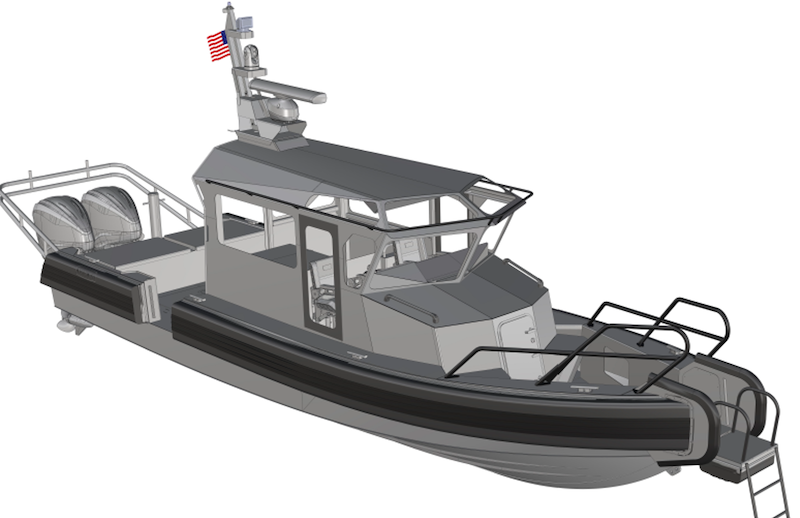 Both boats are fitted with a hinged bow ramp with ladder for egress/ingress to and from the water from the bow and for beach landings, most Lake Erie waterfront is beach. Though not commonly known many rescues occur on beaches where thousands come to play and of course some and hopefully not many make it to the hospital before going home. Both boats are fitted with full size dive doors that can accept a back boarded rescue with ease as the deck height is set as low as possible and meet ISO stability standards. Dive ladders can be set on either side. There are dive lights for diver orientation in tepid water. With the three dive ladder points, if the boat were tied to a dock and another vessel was tied to its side there would still be bow access for dive operations.

Both boats are also being fitted with a hydraulic jack plate assembly built by Porta Products. The unique Jack plates extend the outboards farther out from the transom in a cantilever motion far enough from the transom that at slow to medium speeds the props can run slightly above the bottom of the boat allowing the boat operator a much greater range of shallow water operation without risk of damage to the drives or props.

Lake Erie is not just an inland lake. Lake Erie is known as the most dangerous of the Great Lakes because it is so shallow it can blow up very steep chop and waves in a matter of minutes not hours. Its wave heights have been recorded as high as 16', but they are straight up and down and very irregular. The Interceptors were designed specifically for rough water and their fine entry and variable deadrise provide a soft, dry, ride. If a wave is about to break over the foredeck, the operator punches the throttle and lifts the bow instantly up to 16° as tested.

Additionally, MetalCraft is building the second Interceptor 43/44 for the Port of Corpus Christi. This is the same boat built for the Port of Los Angeles Police that won Workboat’s Boat of the Year for the 2020.

The Port Security boat for Corpus Christi is a multi-mission boat that provides policing and security patrols, provides ship escort, supporting pilots when needed, search and rescue and is fitted with a high power firefighting system for rapid firefighting support.

The boat runs for very long shifts 24/7 and anticipates 2,500-2,800 operating hours per year. The engines are Cummins 8.3L engines with a Cummins five-year extended warranty provided. They are rated at 600 hp each and power Hamiltonjet 322 waterjets through ZF marine gears. The boat does 38 knots fully loaded. The Hamilton jets are fitted with Hamilton Blue Arrow Mouseboat Steering on both stations. The mouse controller at the main helm is mounted in a slick push button slide out drawer for storage when not in use. The aft helm station looks a little like a nice aluminum barbecue when the hinged lockable lid is down. The console houses an engine display, GPS display, wheel, standard bucket throttle controls and a Blue Arrow mouse controller. The helm is far aft by the transom to starboard and the helmsman fits into a nook in the stern railings and has 360° support in a seaway. Crewmen from POCC Police say the aft helm is an amazing control feature for safe handling in close quarters.

The main cabin and cuddy cabin are voluminous and set up for comfort for very long hours on patrol and ship escort operations at the largest oil export port in the U.S. The main cabin headroom is 6'10", cuddy cabin is 6'6". There are three shock mitigating seats for helm, navigator and communications positions. There is a large chart table behind the helm and a back up navigation system.

To port is a large patient berth with lots of storage. The cuddy has a mini galley with microwave, ACDC Nova Cool fridge and a Keurig coffee maker, full head and twin patient berths. Both cabins have extensive insulation and cladding to keep the cabins quiet and relaxing.

The windows are large aluminum framed windows that meet ABYC sight lines. The spotter overhead windows forward and side provide straight up views and high angle side and forward views needed when approaching large ships or tall piers. A unique feature of the side spotter windows is when in a hard over maneuver the side spotter windows are at eye height and remove what would normally be a major blind spot for an operator. With the side doors open it provides added visibility when coming alongside or searching up close.

The cabin is fully climate controlled, with a Westerbeke generator mounted in the large engine room powering the twin Dometic HVAC units that provide defrost to the windshields and heats both main and cuddy cabins with 32,000 BTU’s of heat or AC.

The POCC port security boat has a suite of Raymarine electronics, with twin 12" displays 24 mile radar, CHIRP side scan and a full Raymarine CCTV camera system, Blue Force Tracker tracking systems with full encryption. The FLIR cam and CCTV cams and BFT all link into the AXIOM Pro displays. The boat also has an encrypted Motorola communications system linked into the David Clark wireless and wired headsets.