NTSB determines cause of 2021 tanker grounding in New Orleans

The decision to overtake a tow in a large river bend occupied by multiple vessels during high-river conditions led to the grounding of a tanker and contact with river intake fender systems in New Orleans, the National Transportation Safety Board said today.

Marine Investigation Report 22/11 details the NTSB’s investigation into the March 16, 2021, grounding of the 600' tanker Bow Tribute and subsequent contact with the fender systems protecting two river intakes owned by the city’s sewerage and water board. The Bow Tribute, owned by Odfjell Chemical Tankers, was transiting downbound in the Lower Mississippi River when the vessel grounded while attempting to overtake a two-barge tow in a river bend. No injuries or pollution were reported. Damages totaled over $1.9 million, including $986,400 in damages to the vessel and $926,100 in damages to the fender systems.

On board the Bow Tribute was a New Orleans-Baton Rouge Steamship Pilots Association (NOBRA) pilot and a 27-person crew. Ahead of the tanker, also traveling downbound, was the 2,000-hp towboat American Way (owned by American Commercial Barge Line) pushing two empty barges with a crew of four. The two pilots agreed the tanker would overtake the tow at Nine Mile Point, within the Carrollton Bend. There was additional traffic in the area of the American Way, including the downbound towboat Capt JW Banta pushing two barges and the upbound bulk carrier Red Cosmos. 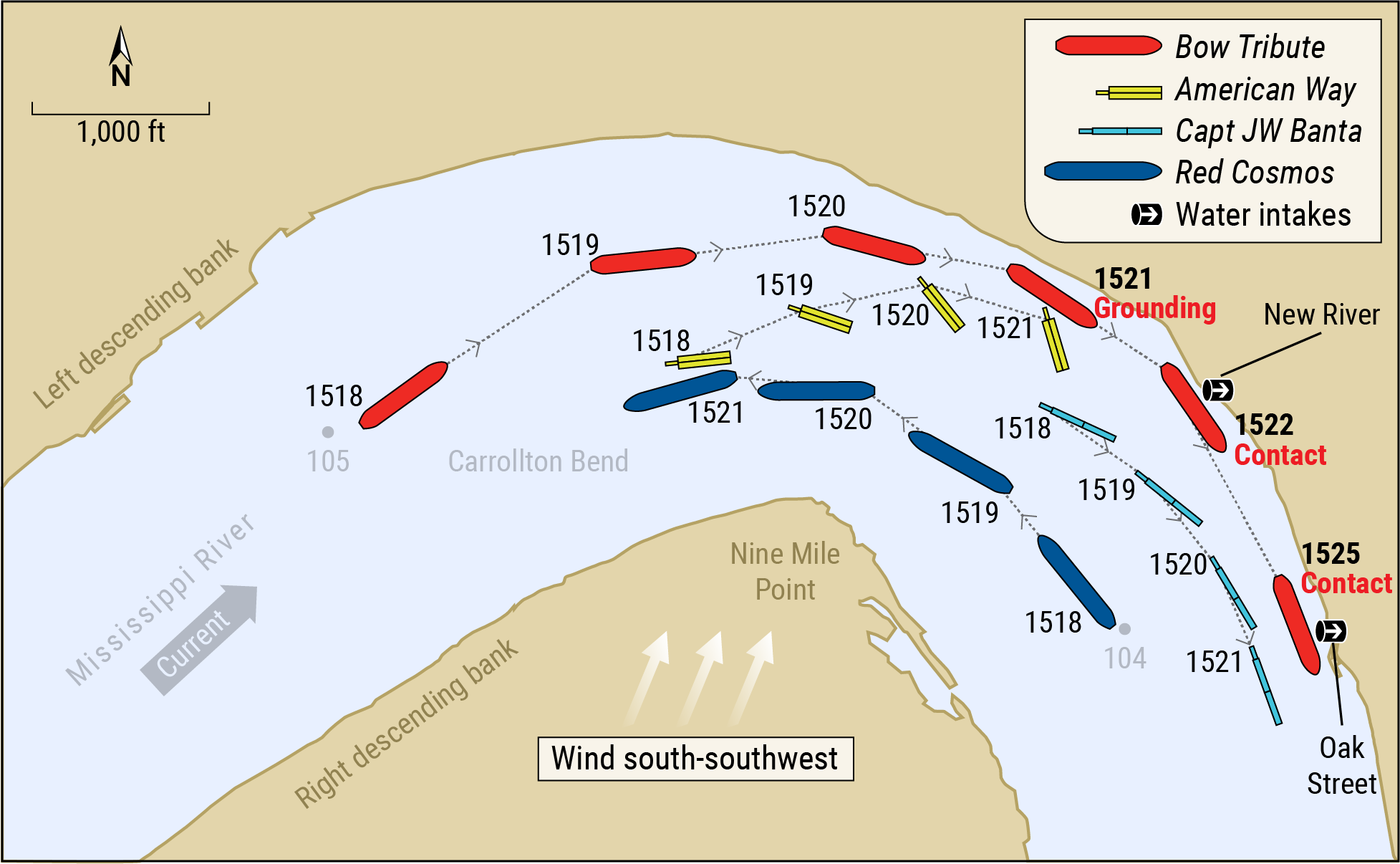 (Positions of the Bow Tribute, American Way, Capt JW Banta and Red Cosmos in the Carrollton Bend near New Orleans in the minutes leading up to the casualty, based on AIS data. The Bow Tribute’s subsequent contact at the two river intakes is also identified. Source: NTSB)

The NTSB determined the probable cause was the pilot’s decision to overtake a tow in a large river bend occupied by multiple vessels during high-river conditions with a strong following current. Contributing to the grounding was the ineffective communication between the pilot of the Bow Tribute and the pilot of the towing vessel American Way regarding where the overtaking maneuver would occur.

“Clear, effective, and unambiguous radio communications should be used, especially during high traffic and dynamic conditions such as overtaking in a bend,” the report said.